The one always making fart noises and putting safety pins on people’s chairs?

Why Thomas Muller is a Dream Team World Cup must have 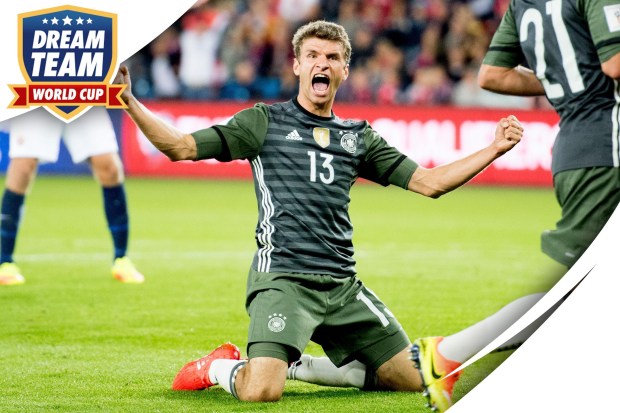 Except, unlike the majority of schoolboy fools, Muller has actually gone onto fulfil his wildest dreams.

Everything about the German goal machine is unorthodox.

When you begin break down Muller as a player, the most startling aspect is nothing appears to standout whatsoever.

In fact EA Sports, the developers of FIFA, have had to manually make up his rating in the past because, as an insider once said, “he wasn’t good at anything.”

“He’s not a great dribbler and he can’t really strike the ball properly — his finishing is sometimes really, really off,” they elaborated.

“Shot power is not his strength as well.”

Back in 2014, Loew said: “He is a very unorthodox player and you can’t really predict his lines of running, but he has one aim and that is ‘how can I score a goal?”

And that’s ultimately the crux of Muller’s success.

His refusal to play by the rules and conform to a defined role have proliferated a stunning career to date.

Muller is a hybrid of so many positions, with fans in Germany coining him the ‘Raumdeuter’, or ‘Space Investigator’ in English.

Calling him a jack of all trades wouldn’t do the man justice because he’s managed to master so many of them.

In England we were spoilt by Frank Lampard’s innate knack of arriving in the penalty area at exactly the right time.

His celebrations too are an underrated phenomenon, laughing in the face of the knee sliders and the Milly Rockers.

He might not be the most fashionable of players, but the very best save their best for the biggest occasion.

To put that in some context, only two players have scored more than five goals at a single tournament this century.

And England have only scored 11 in three appearances since 2006.

So the fact he’s a midfielder on the Dream Team World Cup game is a real eye-opener.

If one man guarantees you goals it’s Muller, particularly given Germany’s nature of getting better and better as tournaments progress.

His idol and former team-mate Miroslav Klose is in his sights and the great German poacher will know his World Cup scoring record of 16 is under real threat.

Muller is 20/1 to finish the tournament as top scorer and priced at £6m on Dream Team World Cup.

Germany and Muller’s relentless efficiency means they can never be underestimated.

And the craziest thing of all?