Ready for some football again? Yeah? Great, because this weekend’s going to be a blast.

Germany’s Bundesliga is finally ready to resume after a lengthy pause – making the German top-flight the first major European league to return to action since the coronavirus shut down.

If that wasn’t enough, things kick-off with the always-fun Revierderby on Saturday between title-chasing Dortmund and their local rivals Schalke.

GET A FREE £30 BET ON THE BUNDESLIGA 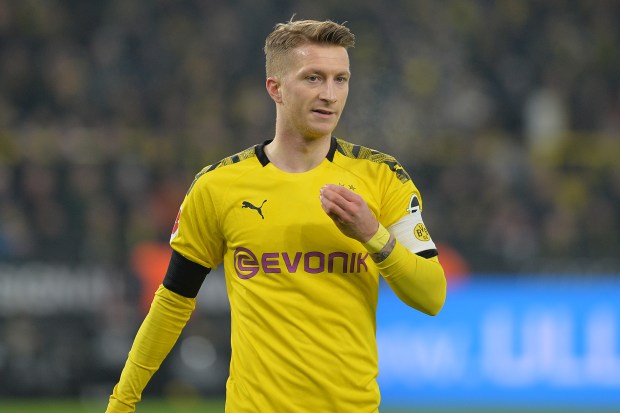 Right, let’s get things cracking then, shall we?

We’re going extra-hard on the Bundesliga in the coming weeks, as we welcome German football into our lives. That means we’re drinking steins, donning lederhosen and eating a big sausage for tea. Who’s with me?

All eyes are on Saturday afternoon’s Revierderby between Dortmund and Schalke, which is one of the biggest and best of German football’s rivalries. Casual fans will already know quite a bit about Dortmund’s awesome attacking power this season, with Haaland the name on everyone’s lips at the moment with his nine goals in eight Bundesliga appearances.

Sancho is also well-known to English fans and is perhaps one of the best in the world right now; he’s notched an incredible 14 goals and 15 assists across 23 league games this season. He also scored the winning goal at the Veltins-Arena last season, in his first start against Schalke.

Everyone’s favourite energy drink connoisseurs RB Leipzig are also in action on Saturday against Freiburg, and we’ll be paying particular interest in their star-striker Timo Werner – the second-top scorer in the Bundesliga this season with 21 goals.

Then of course there’s Bayern Munich, who play Union Berlin on Sunday. Naturally you’d think we’d be eyeing Robert Lewandowski – currently enjoying the season of his life with 25 league goals already – but we’re actually even more excited to see Alphonso Davies in action.

The talented Canadian was dazzling in Bayern’s Champions League win over Chelsea a couple of months ago, combining his pace and technique with a growing maturity in his role as left-back.

BORN ON THE BAYER

We know that you Bets Club fans love a dark horse, don’t you? Well, how about a little bit of Bayer Leverkusen?

The Bundesliga’s perceptual near-missers had been in red hot form just before the break, lead by their star midfielder Kai Havertz. Leverkusen have lost just once in their last nine league matchesand ran out 4-3 winners over Dortmund in that time.

Apparently March was only two months ago? Huh? Anyway, back when football was being played then, we recall a little match between Leicester and Aston Villa – the final Premier League match played before the shutdown.

Both teams went into the game in pretty horrible form if you can remember much that, although high-flying Leicester are always fun at home and had one of the league’s form men in Harvey Barnes – who duly netted twice in the 4-0 win, while leading scorer Jamie Vardy netted the other two.

There’s still some doubters of course, but the Foxes remain one of the league’s most interesting sides and one that’s won us plenty of bets this season.

Ahead of Liverpool’s Champions League second-leg clash against Atletico Madrid, we went big on the so-called ‘Anfield Roar’ – the seemingly deafening support that the Reds enjoy at their home stadium on big European nights.

We saw plenty of it last season when they stormed to Champions League triumph – notably in the win against Barcelona – and we fully expected it in this one, too.

But nope, not only did they fail to overturn their 1-0 deficit from the first leg, but they went and LOST on the night – completely collapsing in extra-time with two goals from Marcos Llorente cancelling out Roberto Firmino’s 94th minute strike to secure the Spaniards a 3-2 win.