Anyone who has ever wrestled with a tough decision in their life will empathise with the indecisive nature of Biabiany’s work.

He cares deeply for Inter, but he’s constantly drawn to Parma.

Is it not possible for a man to love both his wife and his mistress?

Modern art trusts in the power of repetition.

Belfast-born McCartney dedicated his career to the genre, playfully toying with conventions with liberal use of loan spells.

There is a semi-surrealist nature to this masterpiece — the longer you look at it, the more it deceives you.

Did Leeds loan him out to themselves? No, of course not, but it makes you ask the question.

Who doesn’t love a twist ending?

Grant’s art went largely unnoticed most his career but a recent move to Man United has cast a new light over his body of work.

Suddenly all has become clear.

You have to appreciate someone who is willing to sacrifice their bulk of their career in order to produce a satisfying pay-off.

The use of symmetry here is spellbinding.

A modern classic worthy of its legendary status.

Sheer volume alone is not enough to be a credible innovator but Abreu’s subversion of a classic form sets him apart from mediocre journeymen.

Much like the Sagrada Familia in Barcelona, this work is ongoing.

Some believe it will never be truly ‘finished’ and in many ways, this adds to the allure.

While Abreu has remained stoically secretive when questioned about his influences, homage to both Rivaldo and Lutz Pfannenstiel is clearly evident.

Many aficionados believe mainstream exposure has tarnished this piece; though its universal appeal is the reason for its greatness.

In recent years, Keane has returned to the experimental style of his early work after a relatively minimalist middle section that was poorly received by the critics.

The subtle use of Inter Milan at the turn of the century is an instantly recognisable flourish.

Caniggia is best known for his daring disregard for the Atlantic Ocean.

The stark contrast of River Plate and Boca Juniors make this a controversial masterpiece, but a masterpiece nonetheless.

Rarely have we seen such an emphatic end to a career — Wembley (0 apps, 0 goals).

Another piece that crossed over from the underground to mainstream with great success.

Diarra blends tradition with newer trends and evokes a powerful sense of both journey and confusion.

The conservative Frenchman has never revealed the true meaning of his work.

Trailblazing Beardsley pushed the boundaries of what was ‘acceptable’ within the scene.

His complex surrealist style was considered taboo during the Englishman’s formative years but he never relented to the backlash.

There’s so much to explore with Beardsley, from his sophisticated use of local rivals and second spells, to his delightfully incomprehensible Man United phase. 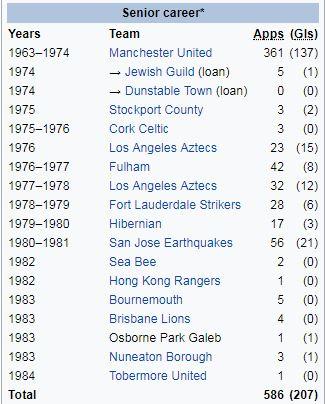 Proof that inspiration can arrive late in life.

Best could not have been more mainstream during his early years, but his ambitious pursuits from 1974 onward were the results of divine inspiration.

We finish with perhaps the most expressive artist currently still honing his craft.

Fame came early to Kazim-Richards when he exploded onto the scene following his Sheffield United x Fenerbahce collaboration.

Though some claim his early work will never be topped, his most recent projects have been valued higher by experts.