That’s pretty mad for a man we fully expected to be approaching his mid 30s after bouncing from club to club over Europe during his career.

His latest adventure has taken him to Liverpool – and he marked his debut in perhaps the best way possible.

Why Shaqiri is a Dream Team favourite 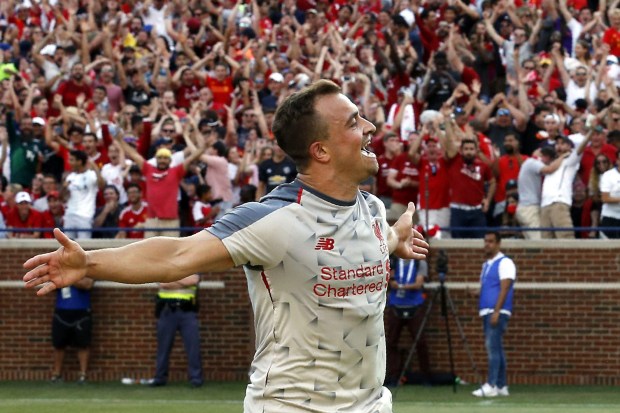 The Reds met arch rivals Man United in front of over 100,000 fans in Detroit on Saturday night.

And Shaqiri scored a stunning overhead kick to notch Liverpool’s final goal in their 4-1 win after coming on as a second half substitute.

What a way to announce yourself.

Sadio Mane and Sheyi Ojo got Liverpool’s other goals, whilst Andreas Pereira struck a beautiful free kick for United.

Pre-season fixtures have to be taken with a pinch of salt but United’s preparation for the new Premier League campaign – which begins in just two weeks – has been alarming at best.

Jose Mourinho has continued to lambast a number of his players while many of them are still on holiday after their World Cup exertions.