Let’s be honest it’s always better to be playing with Cristiano Ronaldo than trying to defend against him.

Leonardo Bonucci has seen Ronaldo’s move to Juventus and immediately contemplated how he was going to be able to stop him when they meet this season.

It appears he has already decided that life would be a lot easier if he could watch CR7 tear it up as a team-mate instead. 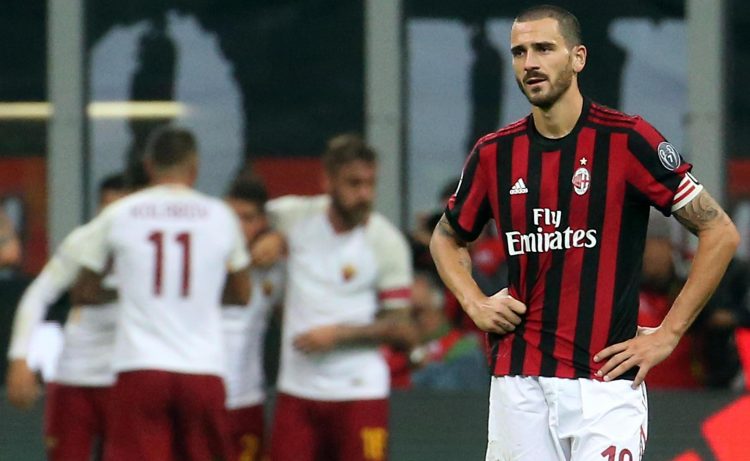 Just 12 months ago Bonucci raised eyebrows everywhere when he left his comfort blanket of the Juventus back three with Giorgio Chiellini and Andrea Barzagli to move to rivals Milan for £40million.

But it was all part of Milan’s rejuvenation as they brought in a load of new players for big prices.

The only problem was that none of the players gelled, Milan conceded 42 goals in 38 league games and ended up finishing sixth in the table.

Vincenzo Montella was dumped three months into the season to be replaced by AC legend and former midfield Rottweiler Gennaro Gattuso.

His reign started by allowing Benevento to get their first ever Serie A points against the mighty Milan, although he did get the team playing to some extent by the end of the season.

Meanwhile, Juventus were closing in on their seventh consecutive Scudetto, despite being pushed closely by Napoli.

Bonucci had gone from a crucial leg in Juve’s defensive tripod, which conceded just 24 goals in the league last season, to the only leader in Milan’s leaky backline.

With Gonzaolo Higuain supposedly surplus to requirements at Juventus now Ronaldo has taken his dressing room spot, Milan want to take the Argentina striker and will let Bonucci return to balance the books.

And with Juve bringing in the world’s greatest striker it comes as no surprise.

Look at it objectively, with the Old Lady having just won their seventh title in a row and then signing one of the best players in the world, it doesn’t look like anyone’s catching them any time soon.

So why would Bonucci want to toil at Milan when he could move back and retake his place in one of modern football’s great defences.

You can’t blame a man for wanting to win things.