Back in the day you judged a player’s work rate on how much mud stained their shorts come the end of the game.

But now it’s all Prozone, Opta and xG. Managers can tell if you’ve even so much as thought about McDonald’s.

There’s one visual aid that doesn’t take a degree in Football Manager to understand and that’s the humble heatmap.

You might have seen Lionel Messi’s heatmap doing the rounds, accompanied by widespread praise for his ability to play four positions simultaneously. 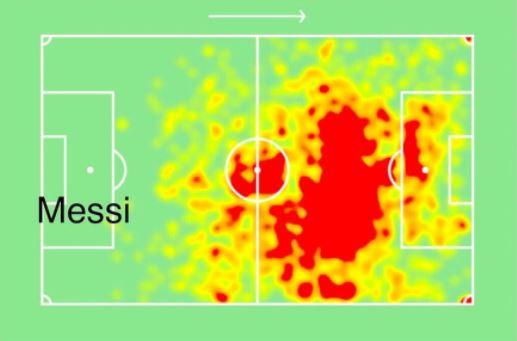 While it’s a bit of a stretch to label Messi’s heatmap that of a midfielder, given he doesn’t do any defending, it still displays the movements of a GOAT.

He’s essentially playing a no.10 role and still leading the race for the European Golden Boot.

But what of Europe’s other big hitters?

Ronaldo’s transformation into the best penalty spot botherer in world football means he spends less time lurking on the wings than he used to.

That doesn’t mean he’s against a dribble down the left before cutting inside, ignoring an easy pass to Gareth Bale, and hammering the ball as hard as he can towards goal from 30-yards out.

As you can tell from Ronaldo’s heatmap he’s not particularly familiar with his own half, let alone his own penalty box.

Spot the corner taker. Ozil has spent more time trying to avoid the first man from a corner than he has in the opposition’s box.

He drifts where he wants, or where Granit Xhaka’s misplaced Hollywood passes take him.

If you squint enough you can make out the SOS message Ozil has carefully been constructing all season.

Take a pinch of N’Golo Kante, add a dash of Carlos Tevez, package it with some Oral-B sponsored dentures and you’ve got yourself Firmino’s heatmap.

The Brazilian clearly watched as many Claude Makelele YouTube compilations as he did Ronaldo highlights growing up.

Kevin De Bruyne rightly took all the plaudits as Man City’s creative genius this season, but let’s also raise a glass to Silva.

The 32-year-old covered every blade of grass in his unrelenting pursuit of midfield perfection.

If Pablo Picasso painted Pep Guardiola’s philosophy it would come out looking like Silva’s heatmap.

Kane might have missed out on the Premier League Golden Boot but it wasn’t for lack of trying.

He blurred the lines between a no.9 and a no.10 seamlessly, although he only provided two assists in the league, preferring to bother the net himself.

See, we managed to get through that without talking about a certain Dane.

Cavani has a tried and trusted method when it comes to scoring goals in Ligue 1, or Ligue d’Farmers as 13-year-old Twitter trolls have re-named it.

Lurk in, not around, the box and wait for Neymar and Kylian Mbappe’s scraps.

That’s not a criticism though. He’s got 28 more Ligue 1 goals than we have this season.

Ahh, the curse of the young English striker who just so happens to have a bit of flair about him.

Rashford is having to pay his dues as a left-winger who faces a two-week fine every time he ventures into the six-yard box.

You’ve got to respect Giroud’s complete resentment of anything other than a sweeping near post finish or deft header from about ten-yards out.

The Frenchman is almost single-handedly keeping the fine art of being a target man alive.

If you went to shake his hand he’d probably head it or slap it on to the nearest person.

Looking at Griezmann’s heatmap gives us a stitch.

It doesn’t matter if you’re the most technically superior player in the squad, when you work under Diego Simeone you run your socks off.

Then you carry on running until your feet fall off. Then you run some more. You get the idea.

All heatmaps were taken from the SofaScore app