If there was one player who would love nothing more than to spoil someone’s big day, it would be Diego Costa, right?

A carnival atmosphere is expected at the Emirates in what will be Arsene Wenger’s final European home match in charge of the Gunners.

Intent on ruining the party however, will be Costa who boasts an impressive scoring record against Arsenal from his time with rivals Chelsea.

Costa netted three times in six appearances against the Gunners, including a goal in the FA Cup final in 2017.

Atletico’s No18 filled the vacancy of Arsenal’s tormentor in chief Didier Drogba, a man who, if he could, would inject scoring against Arsenal into his veins.

After three seasons with the Blues, Costa departed the Premier League after falling out (unlike him) with Chelsea Manager Antonio Conte.

Following several petty spats through the media between the pair, the striker finally got his move back to Atletico for around £57m in the summer of 2017.

Gunners’ fans had been jumping with joy at the news that Costa was set to miss the first leg due to a hamstring problem, an injury he picked up in the last round against Sporting Lisbon.

But Diego Simeone, who had previously said that his striker had “no chance” of featuring, has confirmed that Arsenal’s bully is ready to make them ‘suffer’ tonight.

Fans (not Arsenal ones) are looking forward to Costa’s return…

The Atletico-Arsenal game should be interesting but Diego Costa's going to get an Arsenal player a red card for sure.

Arsenal is Diego Costa's wet dream, he could bully them on 1 leg. Confident he will start whilst licking his lips.

Diego Costa has terrorized Arsenal in a Chelsea shirt before.. let's see if he keeps doing the same thing with Atleti tonight.

Something which lives long in the memories of Arsenal fans is Costa’s clash with former centre back Gabriel, during a league match at Stamford Bridge in 2015.

Why Costa could cause Arsenal more problems 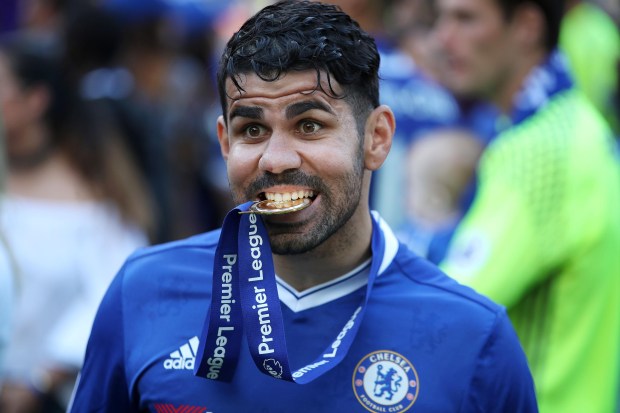 The forward somehow managed to avoid a red card after clashing with Laurent Koscielny and Gabriel, with the Brazilian defender seeing red instead.

It’s unclear yet whether Costa will start tonight, with Simeone keeping his cards close to his chest or how he will choose to deploy the striker.

Wenger’s European home swansong could be going to plan before Costa enters the fray.

The former Chelsea man is 13/2 with Sun Bets to be the last goalscorer, which would be textbook Costa to come on and steal the show.

It’s safe to say that should Simeone choose to release Costa from the bench, it could prove just as troublesome for the Gunners.

The forward will likely charge onto the pitch channelling a bull in a china shop.

BACK COSTA TO SCORE FIRST AT 13/2 WITH SUN BETS