Look, football is probably the best it’s been in its 150-year or so professional tenure.

The players are fitter, the game is faster, it is the most entertaining industry on the planet and it truly is the global game.

But that doesn’t stop some elements of modern football being completely, blood-boilingly irritating at times.

The second round of the League Cup, now known as the Carabao Cup, is happening this week, which means the draw for the third round will be taking place on Thursday.

So far, so normal. However, there is a slight sticking point.

For those of us in Great Britain, the country in which the competition is held, supporters will be having to pull an all-nighter or getting up ridiculously early, after it was announced the draw will be taking place at… 4.15am UK time.

To fit in with sponsors Carabao’s insane plans, the draw will also be held in China, where the local time will be 11.15am.

The ludicrous time continues the Carabao Cup’s farcical nature so far this season.

In the first round draw, conducted in Thailand of course, Charlton were drawn twice in the pots, once away at Exeter and once at home to Cheltenham Town. 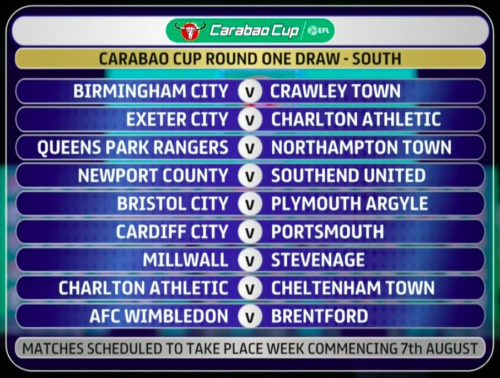 Then, in the second round draw, host and drawmaster John Salako made a bit of a balls-up with the draw by pulling out the wrong teams from the wrong bowls, meaning home teams were listed as away teams, when it should have been the other way round.

Is that to ensure no-one is watching when draw is cocked up again?
Another Football League dreadful decision with no thought for fans.

Why is the draw for the English League Cup taking place in China and at 4:15am UK time? Is this a wind up? pic.twitter.com/MO2hKRSHW4

I'm sure the Chinese fans of Accrington Stanley, Burnley and Newport County will be delighted the Carabao Cup draw is 11:15 their time

Modern football, we’re better than this.