Arsenal midfielder Mesut Ozil has probably never come under as much scrutiny in his career as the criticism he’s faced this season.

The German is often accused of being lazy and anonymous when it really counts for his club, but in Tuesday night’s 2-0 victory over Sunderland, Ozil showed people his quality, assisting Alexis Sanchez’s opener and performing superbly throughout.

Not only did Ozil play 12 ‘key passes’ in the match, a Premier League record for this season, we’ve also crunched the numbers for the entire campaign and discovered some pretty interesting stuff when it comes to debunking the ‘Ozil is lazy’ myth.

Thanks to our friends at Opta, the most distance covered and the average distance travelled for Arsenal’s team this season has thrown up some surprising results, which can be seen in the charts below. 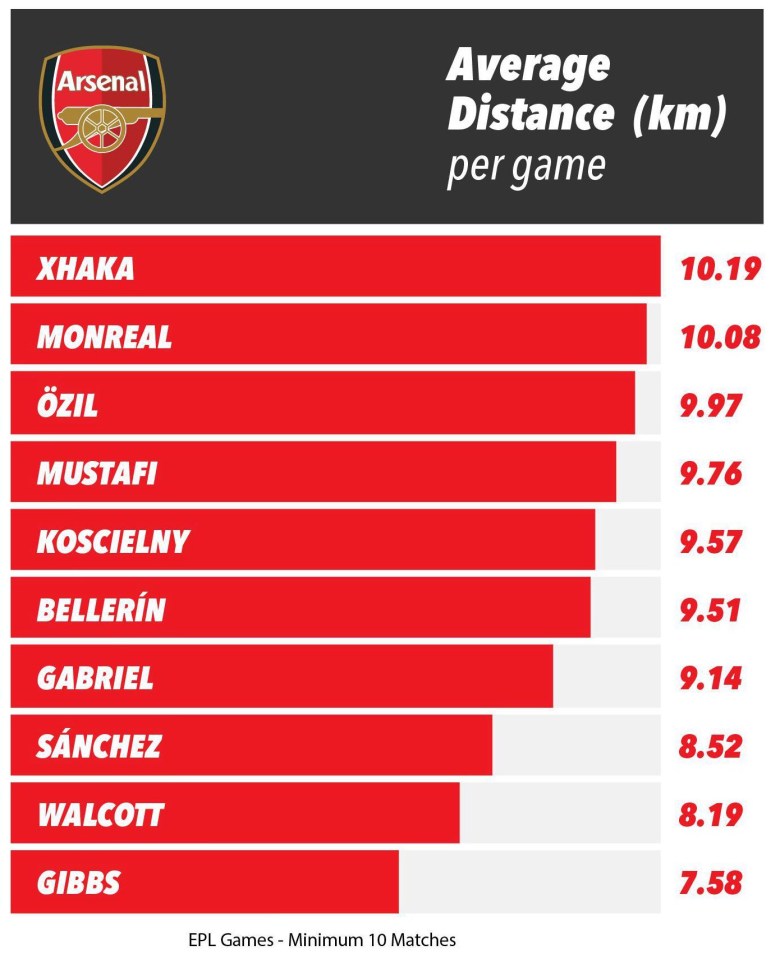 As shown in the graph, Nacho Monreal tops the table when it comes to total distance covered this season for the Gunners, with the Spanish left-back travelling a whopping 352.73 kilometres in the season, over the course of 35 games.

But here’s where it gets intriguing – Ozil has covered the second highest distance throughout the campaign, racking up almost 319 kilometres in 32 games.

When worked out by average per game, Ozil comes third only to Monreal and Granit Xhaka, who covers an average of 10.19 kilometres each Premier League match.

Alexis Sanchez, who looks like a busy player and has been described as being like a Duracell bunny for his work rate, only registers an average of 8.52 kilometres per match this season – a full 1.45 kilometres less than Ozil, who travels an average of 9.97 kilometres each match.

Sanchez of course has been Arsenal’s main man this season, scoring 23 Premier League goals and assisting 11, but perhaps Ozil should be seen in a more favourable light from those who have heavily criticised him this season.

YOUR FREE £10 BET WITH SUN BETS