Granted this may be the strangest headline you read all day, but bear with us.

Was Toni Kroos born in the wrong country?

Because we’ve noticed something quite bizarre about the midfield maestro in recent years.

He’s an Englishman at heart.

Happy Birthday to the greatest entertainer of our time ! @robbiewilliams #legend

Thanks to my mate @ToniKroos for giving me this award tonight!! Winning this award was increds!! Love ya Germany✌️ pic.twitter.com/FUbXw7HHeu

2 He absolutely loves the Darts

3 He spends any spare minute he can get in London 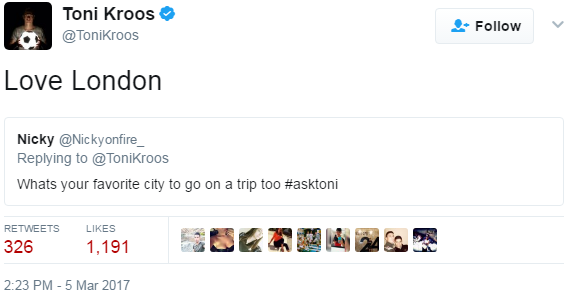 Oh yes, Kroos really must be a full blown Anglo-Saxon because he’s not as clinical from 12 yards as he should be.

The midfielder had a penalty saved by AC Milan wonderkid Gianluigi Donnarumma back in a pre-season friendly in August 2015.

That’s not particularly German, is it Toni? (if that’s even your real name)

5 The British Grand Prix is a regular stomping ground

7 This salty banter aimed at the Brazil team

While online trolling isn’t an exclusively quintessentially British thing, this jibe to the ribs at Brazil’s expense caused a bit of a stir because it reportedly upset Real Madrid team-mate Marcelo.