It’s safe to say that with the notable exceptions of Bebe, Djemba Djemba and Kleberson, Sir Alex Ferguson knew a good player when he saw one.

That’s why he broke the British transfer record to bring Lazio’s Argentinian midfielder Juan Sebastian Veron to Old Trafford in 2001.

Of course, you may well remember him as one of the few flops in Fergie’s long reign but, at the time at least, the United boss was convinced he had landed a genuinely world-class talent.

Looking back, it’s easy to see just why Fergie felt so passionate about his record signing.

After all, everything about him suggested that here was the complete modern day midfielder…

He was powerful. He was creative. And when he hit the ball, it stayed hit.

And his record? Well, that was none too shabby either.

An established international with Argentina, he recorded the most assists at the 1998 World Cup and made Team of the Tournament too.

Then, with Parma and Lazio in Italy, he had won six trophies in just three seasons. 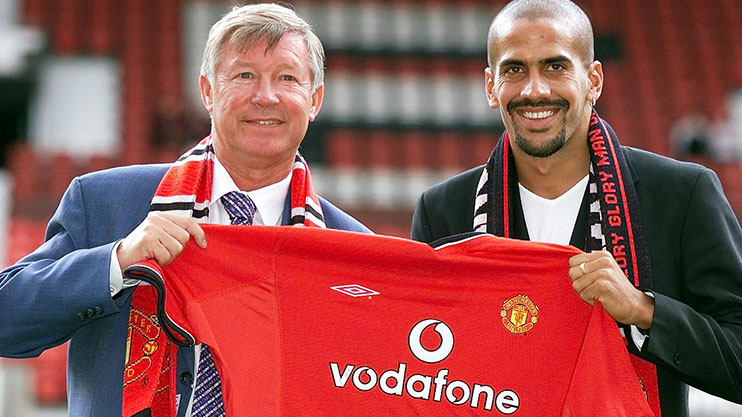 It’s safe to say that Juan Sebastian Veron was always going to be a footballer.

His father, Juan Ramon Veron, was a star of the Estudiantes side that broke the stranglehold of Argentina’s ‘Big Five’ to win the league title in 1967 and that went on to win three straight Copa Libertadores from 1968 to 1970.

His old man scored at Old Trafford too, heading the only goal in their win over the European champions Manchester United in the 1968 Intercontinental Cup.

They called Veron Senior ‘La Bruja’, or ‘The Witch’.

And when Juan Sebastian Veron made it big, they called him ‘La Brujita’ – The Little Witch.

For the most part, it was an apt nickname as Veron routinely cast a spell over the opposition.

Blessed with supreme strength on the ball and terrific awareness off it, he seemed to be in the right place at the right time and always available to deliver another killer pass or release a potent strike on goal.

He was a menace over a dead ball too.

His time at home with Estudiantes and Boca Juniors, followed by the multiple successes of his time in Italy, had suggested that Veron would have little or no problem with adapting to the breakneck pace of the Premier League.

And, initially, his Old Trafford career couldn’t really have started much better.

With four goals in his first nine league games, he had hit the ground running in a midfield alongside David Beckham, Roy Keane, Ryan Giggs, Nicky Butt and Paul Scholes.

In September 2001, he weighed in with some vital goals, including the fourth in the classic comeback win at Spurs when they trailed 3-0 at half-time but stormed back to win 5-3.

He even won the Player of the Month Award.

United would finish third in the Premier League that season, 10 points behind the champions Arsenal.

The following season, with new record signing Rio Ferdinand at the back and prolific striker Ruud van Nistelrooy rewriting the record books upfront, United returned to the top of the pile but it had little to do with Veron.

Niggles, reshuffles and the impressive post-World Cup form of Nicky Butt had seen the Argentine fail to hold down a regular first team place and though he picked up a Premier League winners’ medal, Veron had only played in 21 of the Reds’ 38 games.

Curiously, Veron still seemed to reserve his best performances for the Champions League, although United would go out in the quarter-finals losing 6-5 on aggregate to Real Madrid and this despite an heroic 4-3 victory at Old Trafford.

Veron’s last appearance for United would be as a substitute against Charlton in their penultimate league game of the 2002/2003 season.

And while he did turn out in some pre-season games that summer, it wasn’t long before Chelsea, newly bankrolled by the Russian billionaire Roman Abramovich, signed him for £15 million in August 2003.

Again, he couldn’t have started more impressively, scoring in a 2-1 away against Liverpool. 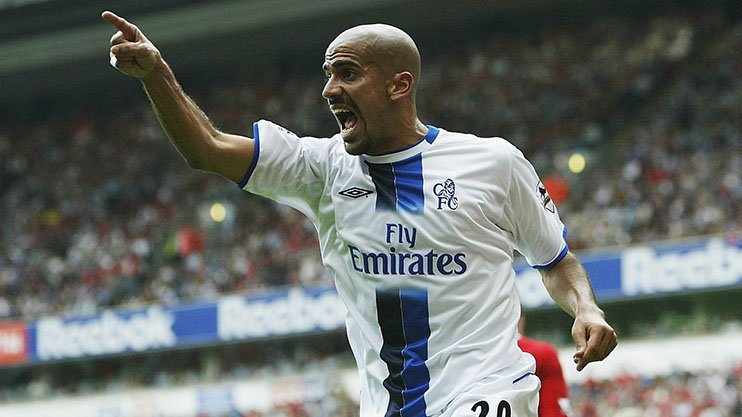 But that was the only goal he ever scored for the Blues.

When the new season started Chelsea had a new manager in Jose Mourinho and Veron had been deemed surplus to requirements and was loaned out to Inter Milan.

It was a sad end to The Little Witch’s time in England.

While he had shown what he was capable of it had only been in fleeting spells, most notably in Europe, and he had failed to make the impact expected of him.

But it was harsh, not least because he was trying to find a space in what was one of the most gifted, consistent and tight-knit midfield line-ups in the game.

In 2006, Juan Sebastian Veron returned to his boyhood club and to the team that his father (below) had played for, Estudiantes de la Plata.

The club had gone 23 years without winning a title and had sat by as rivals Boca Juniors and River Plate mopped by trophy after trophy.

But this was different.

Now, ‘Los Pincharratas’ were managed by the Argentine great Diego Simeone and with Veron as his new general, there was a new-found resolve to drag the team out of its torpor.

Suddenly, Veron had found his calling.

That season he displayed all of the passion and the power, the imagination and verve of old, skippering his team to a winner-takes-all play-off against reigning champions Boca Juniors, a game in which they came from behind to win 2-1.

And Veron? He was Player of the Year.

And he made the FIFA100 list of the 125 Greatest Living Footballers too. 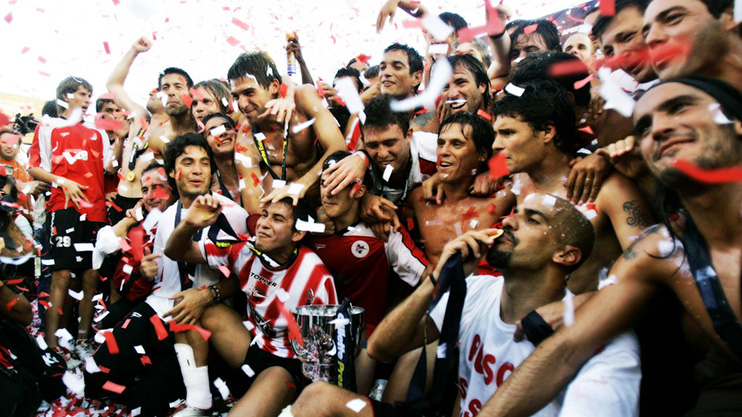 Last year, at the age of 42, Veron returned for a fourth spell with Estudiantes after making good on a promise to the fans.

He is still being paid a minimal wage that gets fed back into the club and his while he’s only featured in friendlies, his experience is invaluable to the squad as a whole.

There you have it; so much more than a United flop.