Arsenal and Chelsea are preparing to face off at the Europa League finals this Wednesday in Baku.

Pro-FIFA player and FIFA coach at Dream Team Gaming, Fully, has broken the teams down and built the best possible combined XI from the upcoming game in FIFA 19.

You can see the full breakdown below.

Straight away, a lot of people will be wondering why I haven’t picked the TOTS Aubameyang here since he has better stats.

The answer you will find further down the list, specifically at RW.

As for Lacazette, he is a deadly striker with 93 pace and 96 shooting, the striker also has 90 physical which is going to make him hard to knock off the ball.

One of the easier choices now. a 98 rated Eden Hazard.

Same as Auba, 99 pace, 97 shooting with 4-star skills and weak foot, there’s no one who comes close in this position.

The only issue is, he’s small.

With the current crossing meta, he’s not going to win many back post crosses so you may have to adapt your style a little, or even play him in a central role (CAM).

Between these two teams, there’s not a lot of quality in this position and I’m making this team based off what I believe will work on FIFA 19.

As mentioned previously, the current crossing meta requires fairly tall players in wide areas to challenge for the headers at the back post.

Aubameyang is the tallest player you can put here, and for that reason, I would sacrifice using his TOTS item and favour this FUT Birthday version, unless you want to play the TOTS item off chemistry.

His stats do all the talking.

89 shooting being his lowest-rated stat is quite something, but he’ll be used in a defensive position anyway.

He has a good pace to chase people down as well as fantastic physical and defending stats.
If he was 6’2, he really would be the perfect player.

Mkhitaryan (Road to the final)

He also has a 5-star weak foot which is a nice little bonus.

Torreira is a nice solid player to partner Kante in the defensive areas of the midfield.
He isn’t as good, but will still do a good job.

The only issue is, having two small defensive midfielders can be a problem, especially from corners when you can’t pick who’s marking who.

This was an easy decision.

Anyone who invested in the “Road to the final SBC” will be happy to see Chelsea making the final, which has resulted in Alonso upgrading all the way to a 90.

At 6’2, he’s going to be your best bet at stopping those back post crosses!

Arsenal really lacked in this area which is why both CB’s are Chelsea players.

David Luiz getting a flashback item helped his cause when making it into this team, narrowly putting him over Rudiger.

I know Rudiger is a higher rating that Azpi, but Azpi has always been a solid option for me. 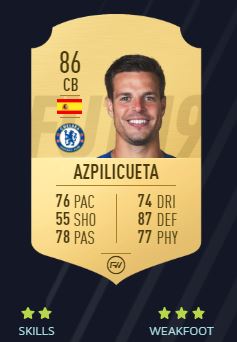 There weren’t a lot of options here at all.

Leaving Bellerin pretty much uncontested for the position!

He has the pace, but not the height, meaning he’s not going to win you a lot of headers so be careful!

He “should” be a solid keeper.

I say should because it’s one of the most unpredictable positions on the game.

One game your keeper can be amazing, the next they have no hands!

FIFA 20: EA has finally announced the new updates for career mode in this year's game

FIFA 20: 8 changes we want to see to Ultimate Team