When does Fortnite Season 9 start?

We’ve pulled together everything you need to know about the Fortnite Season 9 – from hints and tips to more general gameplay-related stuff and big announcements.

Treat this as your own personal Fortnite Season 9 ‘hub’ – we’ll be updating it daily, so you’ll always be in the know.

The season 9 victory umbrella has been revealed!

If you are one of those who likes to collect the victory royale umbrellas every season you will be looking to add this beauty to your collection.

The Season 9 map has been revealed!

They have been replaced by their futuristic counterparts ‘Neo Tilted’ and ‘Mega Mall’.

New teasers for Season 9 have been revealed!

The official Fortnite social channels released have released this image alongside the caption:

This really puts things into perspective as the future of Fortnite is unknown – at the start of Season 8 no one would have predicted that both Tilted and Retail would have been destroyed so completely.

The dynamics of the battle royale have completely changed forever, with the more daring players no longer being able to drop at Tilted Towers Season 9 is going to be interesting.

The latest teaser to be released by Epic games is of what appears to be a futuristic pilot.

The caption alongside the photo is as follows:

Both teasers so far have alluded to the future of Fortnite, the recent un-vaulting event gave players the opportunity to decide the future of the game AND the creative director recently came out saying that they wanted to do more of this.

It seems as though the direction Season 9 will take will be directly in the hands of the players.

The final teaser before the launch of Season 9 has been released by EPIC Games across all of their social channels alongside the caption:

Fans of the recently destroyed Tilted Towers may be glad to hear that this may not be the end of the infamous killing zone for players searching for a thrill.

Epic has continued to allude to the future with this teaser and with the theme of the upcoming season still very much under wraps – the future is not just tilted… it’s unknown.

One thing that is almost definitely coming to the new season of Fortnite are load outs.

Ever got annoyed when you have to constantly change back-blings, skins, pickaxes, trials etc?

Well, you won’t have this problem for much longer – with the addition of load outs into the game, players will be able to prepare specific skin combos and switch between them saving loads of time!

We decide what’s what in Season 9!

The creative director of Fortnite has come out and said that:

‘Agency and Choice are such fascinating concepts. Especially in the content of ‘narrative’…

What does this mean?

Well, it means that the future of Fortnite, specifically Season 9 will be tied to the decisions we the players make in-game.

A brand new item has been added ahead of Season 9

As old-school Fortnite fans well know – the approach of a new season hails events that affect weapons, game modes and most importantly the battle royale map itself.

It seems that every single season there is a rumour about Tilted Towers and it’s imminent destruction.

However, with a potential earthquake and the potential for a volcano to explode at any moment, the popular ‘drop’ location could be in danger.

Back at the start of Season 4 tilted Towers was struck by a meteor strike which left some craters and cosmetic damage to the hot zone.

However, the Twitter account Fortnite News has released a leaked video of what Tilted Towers is going to look like after the event that will lead to Season 9 in the next few weeks…

What could have done this to Tilted I hear you ask?

The most likely cause of this destruction is the (currently) dormant volcano that is expected to erupt within the next two weeks.

Oh, you thought the Kraken was a mythological creature?

You couldn’t have been more wrong.

The Kraken is, in fact, real and the deep ocean dwelling creature is more than likely making its way to the Battle Royale map in order to wreak havoc and chaos. 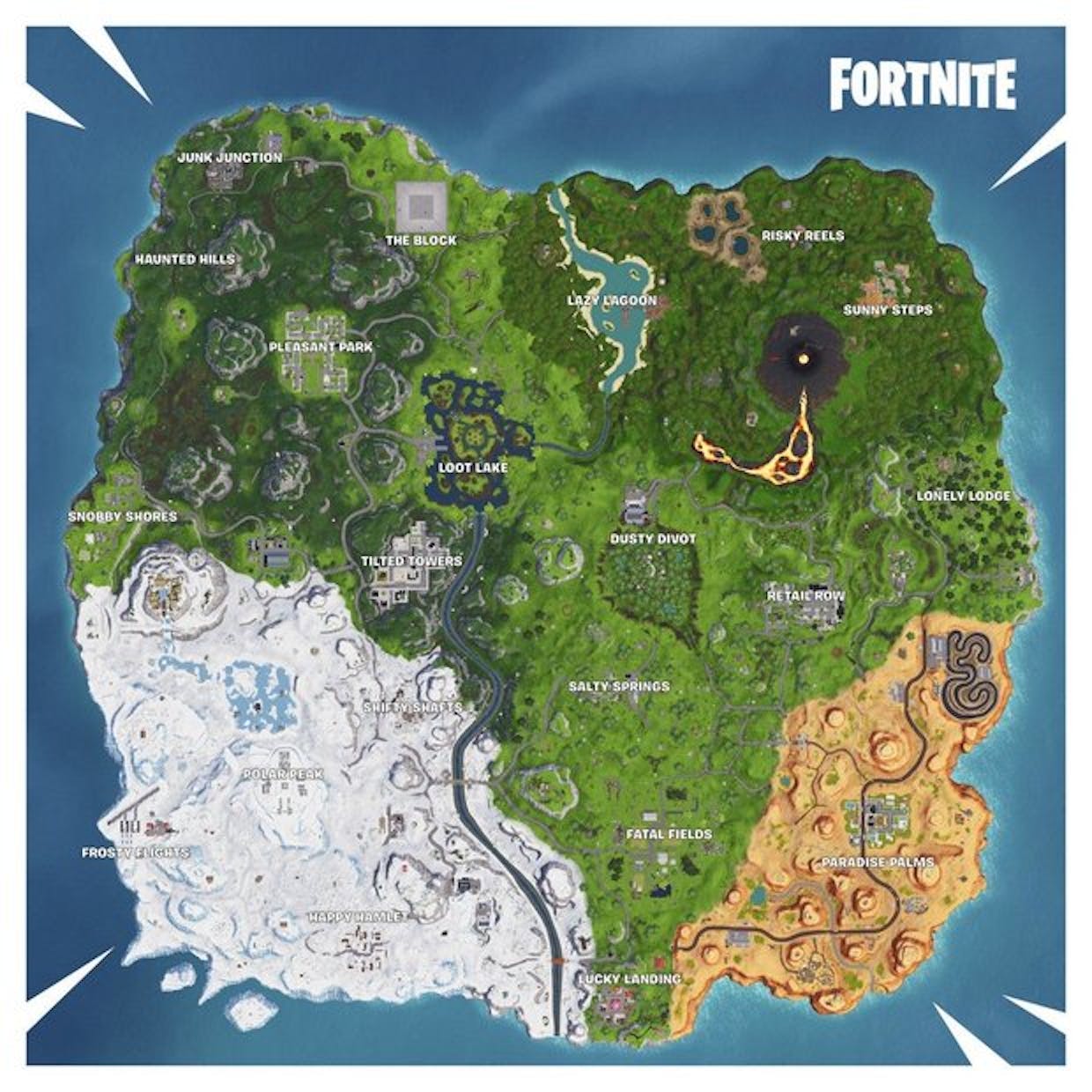 Images of the Kraken have been sprouting up around the map for a good few seasons now, however, since the launch of Fortnite Season 8 we have seen the teasers increase dramatically.

Looking at the Fortnite Season 8 map, we can see that Lazy Lagoon, the home area of pirating, has a river connecting it to the ocean.

It has been rumoured by Fortnite players that this is where the Kraken will stage its attack on the map.

Similar to the previous live events EPIC Games has hosted, like the Marshmello concert and the rocket launch, the Kraken will arrive just before Season 9 starts.

It will be likely that the whole lobby will have to team up and fight the Kraken, making it the first community boss that Fortnite players will have to defeat.

The volcano is going to erupt!

We now have confirmation that the latest sight in Fortnite’s battle royale map is finally going to do something other than hurt you when you step on it.

Thanks to the recent patch notes, it has been revealed that Volcano eruption sound files have been added to the game.

It looks as though we could finally be seeing the first large-scale Fortnite event that will affect the upcoming Fortnite season.

How will this explosion affect the map?

Well, the eruption could be so huge that the entire map is destroyed – ultimately forcing EPIC Games to bring out a brand new map.

This, however, is unlikely considering the amount of time and effort that has gone into the creation and story behind the current Fortnite map.

The more likely outcome is that the eruption will damage certain areas of the map, causing potential earthquakes that split the island creating new points of interest.

Fortnite Halloween 2019 – costume, skins, background and what we know so far

FIFA 20: EA is 'worried' about the Ultimate Team loot box ban in the US

Fortnite Season 9: Tilted Towers may finally be getting destroyed

Fortnite Season 9: Kraken is rumoured to be attacking the battle royale map soon

Fortnite Season 9: The volcano is going to erupt and it could cause a lot of damage