The Real Madrid forward swept aside their next door neighbours with a superb treble to all but guarantee his side’s route through to the final of Europe’s top competition.

So while it may be of no surprise to see CR7 was given a nice little boost by EA Sports for his FIFA 17 Ultimate Team card, the level that he’s now reached in the game is almost perfection.

EA Sports released his latest card on Saturday morning, and it’s fair to say the stats on it are absolutely incredible. 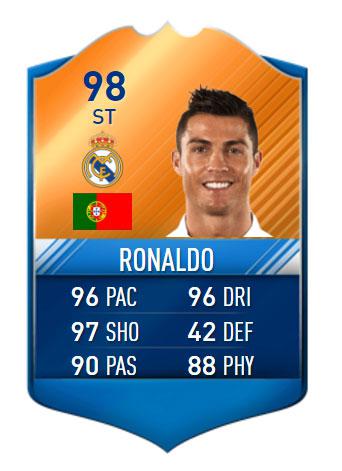 The card suggests Ronaldo’s Team of the Season (TOTS) card will probably be the maximum 99.

It is the fourth game in a row that Ronaldo has earned himself a 98 rated card or higher from EA Sports, and it’s a mark of the player that his ratings just seem to get better and better.