Survival is the name of the game in both the Premier League and Dream Team Selector.

With the latter, you are only able to pick each team once as you seek to predict a winner each week in hope of winning a share of a tasty jackpot.

That means you need to pay attention to every one of the 20 top-flight outfits, from the title contenders to the relegation-threatened scrappers.

With that in mind, let’s take a closer look at the teams at risk of the drop in an attempt to clear the muddy waters.

CLICK HERE TO PLAY SELECTOR AND YOU COULD WIN SERIOUS CASH

Just five points at the halfway mark puts the Blades on course to pick up fewer points than even the Derby side of 2007/08, who hold the Premier League’s record-low tally of 11.

It doesn’t get any easier for Chris Wilder and his beleaguered troops with Man United and Man City come in the next few week — fixtures that will be popular among Selector players.

West Brom might be better off than the Sheffield United, but they’re hardly on safe ground.

Big Sam has generated a bounce of sorts but the Baggies face a stiff task if they are to avoid the drop as they did in dramatic fashion under Bryan Robson all those years ago.

West Brom have conceded 43 goals in their 19 games so far, 11 more than the only team below them in the table.

SCRAPPING FOR THEIR LIFE

Fulham have been a team transformed in recent weeks, becoming miserly at the back and looking threatening going forward.

But their spirited performances haven’t translated to victories as they still only have two wins to their name this term.

Selector players should consider that only two teams have drawn more games this season — remember, if your selected team draws then you are eliminated, only winners progress!

Burnley have taken 10 points from their last seven matches to improve their fortunes.

But with a small squad and the league’s bluntest attack – Patrick Bamford is currently outscoring the Clarets’ entire squad – they could easily slip through the trapdoor. 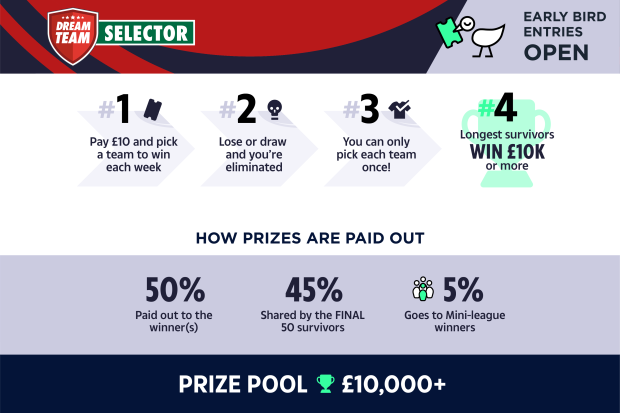 LOOKING OVER THEIR SHOULDER

Steve Bruce described his Newcastle side as ‘hopeless’ after their recent loss to Sheffield United.

And with no win in the league since December 12th, he badly needs his men to respond to his criticism.

Brighton are far easier on the eye and have perhaps played better than the league table suggests but attractive football won’t count for much if they aren’t able to build on their 1-0 win at Elland Road last weekend, just their third victory of the season.

Eight draws will also make them a stumbling block for Selector players once the new game gets underway at the end of this month.

*promotion runs until January 18 at midnight. Entry is £10 thereafter until the closing date on January 30 at 12.15pm. Sign up to play Dream Team Selector at dreamteamselector.com. Competition rules and terms and conditions apply. 18+ | Please Play Responsibly | www.begambleaware.org