With the international break done and dusted, we’re ready to feast on the meaty goodness of fantasy football.

But before we dive headfirst into another weekend of succulent Premier League action, let’s have a look at how our Dream Team favourites fared while they were away, shall we? 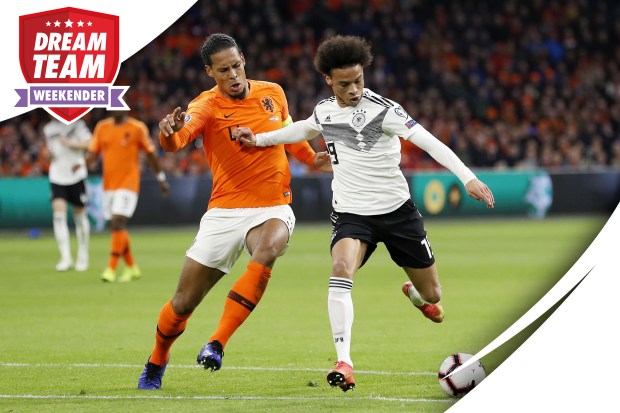 Hazard swapped his blue Chelsea shirt for the red of Belgium last week, but it was the same old story for Dream Team’s player of the season so far.

The nippy winger netted twice against Russia on Thursday before scoring the opener in their 2-0 win over Cyprus to put the Red Devils in the top spot of their qualifying group.

Hazard’s goal-scoring form for his country is certainly great news for Chelsea, as he’ll be in the right frame of mind for their upcoming games against Cardiff, Brighton and West Ham.

There weren’t many players across Europe who had a better international run out than this guy.

Sterling was the standout performer for England in their two Euro 2020 qualifiers, having netted a hat-trick against the Czech Republic on Friday before grabbing a goal and an assist in the 5-1 win over Montenegro on Monday.

In fact there’s fewer players in the Premier League in better form right now, so sticking with Raheem for your Dream Team would be a very smart decision between now and the end of the season.

Compared to Sterling, Kane had a relatively quiet couple of games for England; only scoring once in each of their qualifying matches.

Now it’s time for Spurs’ main man to concentrate on their tricky run of games, which includes their upcoming Champions League quarter-final tie with Man City.

The Netherlands’ resurgence under Ronald Koeman has been one of the themes of recent international breaks, with the Oranje looking to make up for their failure to qualify for both Euro 2016 and the 2018 World Cup.

With van Dijk running things at the back, they certainly have a solid defensive foundation to work with as the Flying Dutchman has been as solid for his country as he is for Liverpool.

VVD scored the final goal in their 4-0 win over Belarus last week, but was also in the side that lost 3-2 to Germany at the weekend.

Normal service resumes on Sunday as the Reds host Spurs.

Sane definitely had a better time than van Dijk in Germany’s clash with Holland, as the Man City winger scored the opener in their 3-2 win.

Much like at club level then, Sane managed to get the better over the Dutch defender – but will it be the same story in the title race between City and Liverpool?