Yes the biggest and best club competition is back and FOUR – count them FOUR – of our handsome sides have made the last 16.

But which players are we backing to shine over the coming weeks? We’ve selected five that could provide some Dream Team delight… 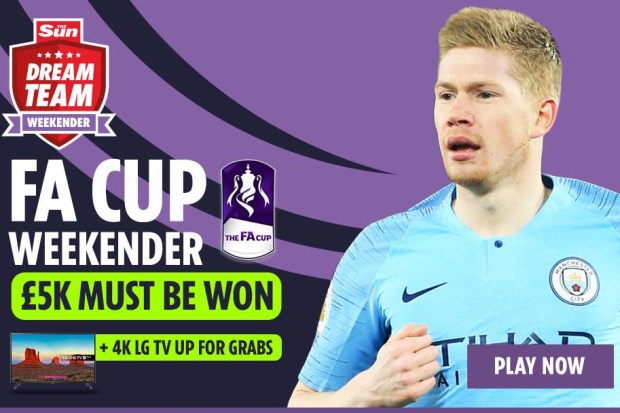 We couldn’t really start anywhere else since Manchester City pulled a rabbit out of the hat to clinch the easiest draw back in December.

Schalke aren’t what they once were – they’re 14th in the Bundesliga – and we’re backing one of their own to do the damage.

Sane left the German side for Manchester back in 2016 and, while he has been withheld a bit in recent weeks, he would love to shine on his return.

We’ve gone for Sane over Raheem Sterling and Riyad Mahrez because he has two goals and an assist from his three Champions League appearances so far this season.

We’ve steered clear of either Sergio Aguero or Gabriel Jesus because tinkering Pep gives us too many headaches.

Zinchenko was instrumental as City demolished Chelsea at the weekend, picking up two assists and a clean sheet.

He averages 5.5 points per game this season – only the real big hitters boast a better record – and the scheming Guardiola appears to prefer him to Danilo and the injury-plagued Benjamin Mendy at left back at the moment.

Hey everyone; you should probably think about picking the league’s best player since November!

Hardly a news flash but there’s even more reason to pick Son with Borussia Dortmund coming to town.

The South Korean has scored more goals against Dortmund than anyone else during his career having bagged eight in nine games against them.

While Liverpool are stuttered and spluttered a bit of late, Mane has held his head high.

The unpredictable forward has scored in four successive games – opening the scoring in three of them.

Liverpool’s defence will be severely weakened by the absence of the suspended Virgil van Dijk for the first leg against Bayern.

So it’ll be all out attack, with Mane possessing the minerals to boss the Bavarians.

Pogba will have extra incentive to take centre stage against PSG will all of France watching.

He has averaged an astonishing 9.9 points per game since Jose Mourinho was finally given the boot just before Christmas.

And with no Neymar or Edinson Cavani, Pogba will go head to head with Kylian Mbappe for the biggest star on show.