We’re taking a slight step back from the Premier League this week with England on the agenda.

So we’ve decided to take a good look at the very best Dream Team bargains on offer at the moment. 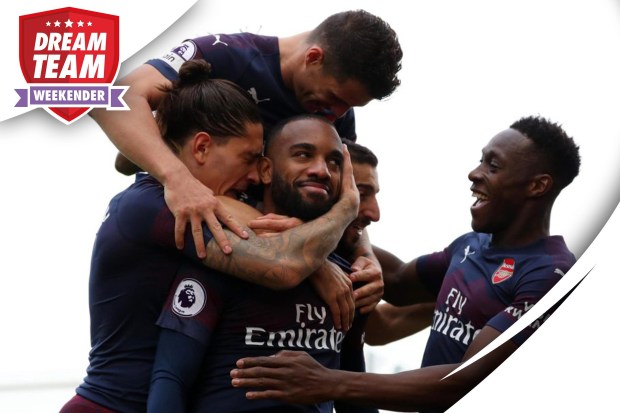 Using the 3-4-3 formation, we’ve come up with a line-up of reasonably priced stars worth just £2.5m and under.

Wolves defender Matt Doherty is the pick of the bunch, having amassed 67 points despite his fairly affordable £2.3m valuation.

Here’s who joins him:

This guy went a little under the radar when Newcastle snapped him up on loan from Sparta Prague back in January.

But having splashed the cash on him over the summer (that’s right, Mike Ashley does cough-up on players, sometimes), plenty of you have started to pay attention to this reasonably priced goalkeeper.

He’s kept the Magpies head above the water at times this season and he’s one of the best budget options between the sticks right now.

Bournemouth have been a rich source of fantasy football bargains in recent years.

Josh King was a Dream Team gem in the past, while we’ve been raving about Ryan Fraser and Callum Wilson this season.

But special praise belongs to their no-nonsense defender Cook, who’s been ever-present in their team and has helped them to four clean-sheets so far.

Doherty has been the worst kept secret on Dream Team this season.

His sheer brilliance has made him an instant fantasy football favourite, with nearly 10% of in-game managers picking the relatively unknown Irishman.

Currently outscoring the likes of Kyle Walker, Joe Gomez and Cesar Azpilicueta in terms of Dream Team points scored, we implore you to sign him up before his price begins to rise.

Wan-Bissaka has been all the rage this term, although only 2.7% of you have the Crystal Palace full-back in your team at the moment.

His season started with a bang at Craven Cottage, where he was tasked with marking Fulham wonder-kid Ryan Sessegnon on the flank and picking up a WhoScored rating of 8.63 in the process.

He’s kept up the eye-catching performances in Roy Hodgson’s side and will surely be knocking on the door of Gareth Southgate’s England side sometime soon.

We were all talking about Watford at the start of the season, as the Hornets threatened to shake up the establishment by winning their opening four games.

Capoue is among the best central midfielders in the Premier League, according to Watford gaffer Javi Gracia, anyway.

And while we’re not completely sure we agree, we do think the all-action Frenchman is one of the best bargain buys you can have in your side at the moment.

Leicester snapped up Maddison from Norwich over the summer and he’s instantly taken to Premier League football.

In fact, the Foxes playmaker contributed to five goals in his first seven appearances and duly won an England call-up last month. Certainly one for the future.

Townsend has always been a reliable source of fantasy football points and this season is no different.

We doubt he’s ever going to be hugely popular with players of our game, but his three goals and one assists in all competitions this season – accumulating in 31 points – means he’s certainly worth your small change.

Wolves have lit up the Premier League this season, with Nuno Espirito Santo’s side certainly playing like top-flight mainstays.

Ruben Neves is undoubtedly their star man but Mexican centre-forward Jimenez deserves some plaudits, having scored or assisted seven of Wolves’ 12 Premier League goals so far.

It’s been great to see Sturridge back in Liverpool’s first-team lately.

The England striker has made 12 appearances for Jurgen Klopp’s side this season, netting important goals against the likes of Paris Saint-Gerrmain and Chelsea in the process.

His lack of guaranteed game-time with the Reds seems to be putting plenty of you off though, as only 1.9% of Dream Team managers currently have him in their fantasy line-up.

Iwobi’s excellent form for Arsenal this term has perhaps been Unai Emery’s greatest success at the club since taking over.

The Nigerian international has played regularly and looks like one of the most improved players in the team.

Despite that, he’s still quite reasonably priced, outscoring the likes of Marcus Rashford, Heung-Min Son and Jamie Vardy despite being cheaper than all of them.