It never rains but it pours in Manchester.

This is the news Man City fans and Dream Team managers alike were dreading.

Just when you were about to bring Kevin De Bruyne back into your team he goes and gets injured for another five to six weeks. 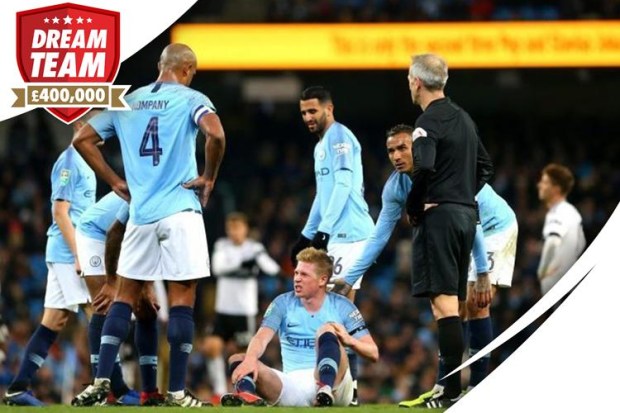 De Bruyne looked like he was back to his very best as Man City eased past Fulham in the Carabao Cup last night but he came off injured in the 85th minute.

It was De Bruyne’s first domestic start since returning from six weeks out after suffering an injury in training.

It looked like the Man United man fell onto the same knee De Bruyne injured and he immediately signalled that he needed to come off.

It is disastrous news for Dream Team gaffers as many of you were preparing to draft him in with fresh transfers dropping today.

De Bruyne is undoubtedly Premier League royalty right now,  at £6.3m he is one of the most expensive midfielders on the game and under normal service he is a goldmine for assists, goals and high ratings.

In other words De Bruyne is a fantasy football points machine.

But this is a huge setback for Man City.

De Bruyne will miss at least six games including a crucial Manchester derby next weekend and if it extends to six weeks out he could miss a total of 10 games.

The games he could miss are: Southampton, Shakhtar Donetsk, Man United, West Ham, Lyon and Bournemouth.

All games where he would be expected to rack up some serious points.

Nearly 10% of managers stayed loyal to the Belgian during his last injury but with another six matches out expect that to drop.

All of you gaffers chomping at the bit to get De Bruyne into your team with this month’s transfers will have to wait.

If you were going to get De Bruyne into your team, stop right now.

If you have already made the transfer this is how you can reverse it.

Luckily for you there is an ideal replacement.

The Icelander is having one of his best Premier League seasons with Everton.

He has scored four goals in his last four games and is the sixth best midfielder in the game with 65pts – ahead of City’s trio of Bernardo Silva, David Silva and Raheem Sterling.