Chelsea’s play this season has been to us what a box of cigarettes are to Maurizio Sarri. Bloody lovely.

Jorginho, Eden Hazard and Ross Barkley are rightly receiving a lot of praise for their impressive performances.

However it is the unsung hero of the bunch, Willian, who has sneaked his way into the top five highest-point-scoring players on Dream Team. 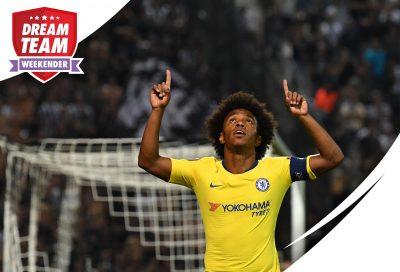 Chelsea’s 2016 Player of the Year has shown signs of brilliance over his four-and-a-half year spell with the Blues.

There are few better at rifling it home from 25-yards-out than the afro-man, who has the ability to glide past players with ease.

The main problem Willian has endured during his time at Stamford Bridge has been scoring consistently.

The Brazilian has just 27 goals in 176 Premier League games, which is hardly jaw-dropping stuff.

However, under Sarri, Chelsea’s attractive style of play should lead to more goals for the front men than the previous regimes of Antonio Conte and Jose Mourinho.

The winger has registered two goals and two assists in the league, as well as one goal in the Europa League this campaign.

Incredibly, Willian is now the joint-third highest point-scoring player in Dream Team. His tally is bettered only by Sadio Mane, Aymeric Laporte and his team mate, Hazard.

Only 13.3% of you have selected the Brazilian, who is available for an enticing £4.3m.

Willian is currently averaging 5.3 points per game, which is an increase from 3.6 last season.

In the past three games that average is up to 7.3, with Sarri oping to start the former Shakhtar Donetsk man over his positional rival Pedro.

The two were battling it out at the beginning of the season, although it appears the chain-smoking Italian has found his new favourite partner to accompany the electric Hazard.

Chelsea upcoming fixtures look favourable, with home games against Crystal Palace and Everton on the horizon, with a trip to BATE Borisov sandwiched between.

Willian has bagged two goals whilst playing Palace and has three to his name against Everton during his time with the Blues, so if you are going to get him, now may be the time.

Chelsea’s toughest game in November is Spurs away. Apart from that, you would think there are points to be had for the King’s Road’s favourite Brazilian.