The winter-nights are drawing in but the cold weather hasn’t cooled Man City’s title charge.

Pep Guardiola’s men are outscoring all who stand in their way this season but their defence has arguably been just as formidable.

Crucial to remedying what was once City’s achilles heel has been Aymeric Laporte. 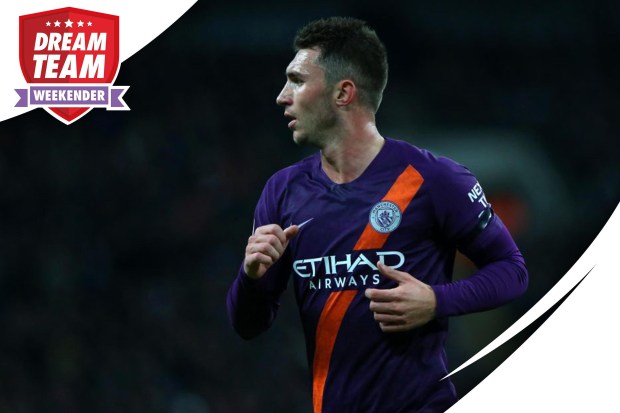 Fans and pundits alike have been waxing lyrical at the deadly attacking play produced by Man City.

However have we actually been overlooking the most impressive component of the Premier League champions this season?

Guardiola’s side have conceded just six goals in all competitions and have seemingly rectified what was once labelled as their weak point.

Laporte’s emergence as a star-performer since his January move from Atletico Bilbao has added to the wealth of world-class centre-back options at Guardiola’s disposal.

The Frenchman has become one of City’s most important players.

Guardiola won’t like to admit that he has dressing-room favourites, but he definitely does and Laporte is clearly one of them.

The towering defender has been a mainstay in City’s back-line for much of the campaign, missing just one of their 14 games this season.

John Stones, Nicolas Otamendi and even stalwart club captain Vincent Kompany have been the ones fearing for their starting-berths, while Laporte is effectively a guaranteed starter.

Be it at the heart of the defence or deployed as a makeshift left-back, the 24-year-old has shone whenever he’s been tested.

A threat in both boxes

Tottenham 0-1 Manchester City: Riyad Mahrez scores to fire City back to the top of the Premier League

Not only have Laporte’s defensive displays been impressive but his towering stature has helped to add an extra dimension to City’s goal-threat from set-pieces.

At 6ft4, the Frenchman is far from your typical Guardiola player, but City are reaping the benefits of having a target-man in the area from corners and wide free-kicks.

Laporte has scored two goals from headers this season and given opposition defenders another thing to worry about when they are given a brief respite from chasing the shadows of David Silva and Sergio Aguero.

As City have already come out of clashes with Arsenal, Liverpool and Spurs unscathed this season, they are a more favourable run of fixtures in the coming weeks.

A string of three home games in-a-row for Guardiola’s men kicks-off with a Carabao Cup clash against Fulham on Thursday, before they face Southampton and Shakhtar Donetsk in front of their own fans.

Laporte will no doubt continue to avert the clutches of his manager’s overzealous rotation policy.

With a price-tag of £4.2m, Laporte is actually one of the best value-for-money defenders in Dream Team.

The Frenchman is currently the highest point-scoring defender in the game with an impressive 81 fantasy football points to his name already.

The Man City ever-present has only been selected by 8.5% of managers despite costing less than Man United’s Chris Smalling (£4.3m) and Harry Maguire (£4.4m). He’s even got more points than the pair combined.