Just as we were getting back into the Premier League, we’ve been stopped in our tracks by another international break.

It’s a good job that Gareth Southgate and those England boys are so freaking lovable, isn’t it? 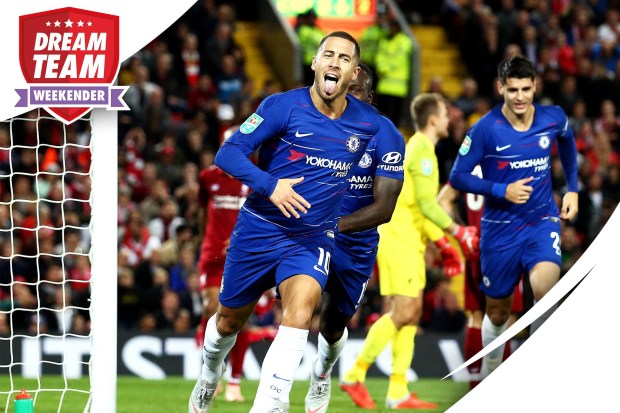 Still, post-Game Week 8 feels like the right time to assess our favourite Dream Team players and have a good old look at who’s hot and who’s not this season.

Undoubtedly, Eden Hazard has been the man of the moment, racking up a cool 102 points on the game so far while last season’s top dog Mohamed Salah has looked a little off colour.

There’s also been a few surprise names in the form of Bournemouth’s Ryan Fraser and Wolves Matt Doherty.

So here’s who’s made our Team of the Season… so far.

Are you surprised? We’re not.

The second-most expensive goalkeeper in the world has found life relatively straight-forward in the Premier League so far this season, following his big-money move from Roma.

Helped out by the defensive brilliance of Joe Gomez and Virgil van Dijk (and not forgetting Dejan Lovren, of course), Alisson has kept five clean-sheets already this season and has only conceded seven times in all competitions for Liverpool.

Which goalkeeper would you rather have in your side?

If we ignore that horrific blunder he made against Leicester – which saw him lose the ball to the Foxes Kelechi Iheanacho with some less-than-fancy footwork – the Brazilian has been a consistent presence between the sticks for Jurgen Klopp’s side and has been the darling of 21% of Dream Team managers.

One of the best Dream Team bargains at this early stage of the campaign, we passionately applaud the 2.6% of you who opted for Wolves Doherty in your back-line.

He netted his first Premier League goal in their 1-0 win at Crystal Palace at the weekend and even chipped in with two assists last month as the newly-promoted side went unbeaten in September.

He’s relatively pricey for a defender – valued at £4.0m on Dream Team at the moment – but you get what you pay for with Man City’s rock at the back.

In City’s first major test in the league this season – against Liverpool at the weekend – Laporte was one of City’s best players in the goalless draw, denying Salah twice in the first half with his tackles and often on hand to cover for the marauding Benjamin Mendy.

He’s been a consistent fantasy football points-scorer and should be one of the first names in your team at the moment.

It’s always the same old story with Alonso, isn’t it?

The Spaniard has once again proven to be one of the best players to pick for your Dream Team, topping the Dream Team points-table as Chelsea have proven to be title-contenders again under Maurizio Sarri.

In fact, he’s by-far the best player you can pick for your team so  far.

Robertson was one of the stars of Liverpool’s run to the Champions League final last season, and their right wing-back has continued this term in the same vein.

He racked up a lovely 31 points from the Reds opening five games as they threatened to run away with things, proving that – along with Alonso – wing-backs are the secret to success on fantasy football at the moment.

Amidst all the in-house fighting with Jose Mourinho and rumours linking him with a move to Barcelona, World Cup-winning midfielder Pogba has enjoyed another fairly fruitful season in terms of fantasy football.

Goals in United’s first two games of the season as well as a brace in their Champions League opener with Young Boys has been his main source of points, but he’s also been front and centre in their biggest performances of the season so far – picking up the Star Man award three-times already.

Perhaps the worst kept secret of fantasy football this season has been the brilliance of Fraser.

The £3.2m-rated midfielder has been key to Bournemouth’s excellent start to the season, with goals against Cardiff, MK Dons in the cup and Leicester, coupled with another three assists to his name this season.

If he keeps this up, the big clubs will come knocking for his signature in January.

Hazard has been the main man so far this season, spear-heading Chelsea’s fine start to life under Sarri with eight goals and three assists in all competitions.

Barring-injury, we all know he’s capable of keeping up this kind of form all season-long, which is a scary thought for defenders everywhere.

With four goals to his name in the Premier League – equal with his strike-partner Pierre-Emerick Aubameyang – it’s safe to say Lacazette is enjoying life under Unai Emery.

Signed from Lyon in the summer of 2017, we’re pretty sure a lot of Arsenal fans were left rather disappointed by the goal-scoring exploits of the Frenchman last season – as he failed to live-up to his billing having previously dominated in Ligue 1.

But he seems much more settled this term and has formed a lethal double act with Aubameyang, which was evident from their run out against Fulham at the weekend.

Will this be the season Aguero finally wins the Golden Boot?

The Man City striker has long-been considered one of the most lethal attackers in the Premier League, but has never quite netted enough to challenge for the league’s top-goalscorer award.

But with five goals to his name so far – just two behind Hazard – maybe this will be his year.

Missing out on his third-consecutive Premier League Golden Boot must’ve stung a bit, but Kane made up for it over the summer by finishing up as the top-scorer at the World Cup.

And he’s started the new campaign as strong as ever, already netting five-times and even breaking his infamous August drought with a goal against Fulham.

He started the season priced at an eye-watering £8.0m – making him the joint-most expensive player on Dream Team from the start, along with Salah – but that didn’t seem to put many of you off, as over 50% of managers currently have the Spurs man in their forward-line.