It’s time to sink your teeth into the juicy steak that is the Premier League, because Game Week 5 is fast approaching.

Spurs get to host Liverpool at Wembley, Man United face the daunting trip to in-form Watford and we get to see more of Ruben Neves when Wolves travel to Burnley on Sunday.

But before any of that, you need to give your fantasy football team some much-needed love. 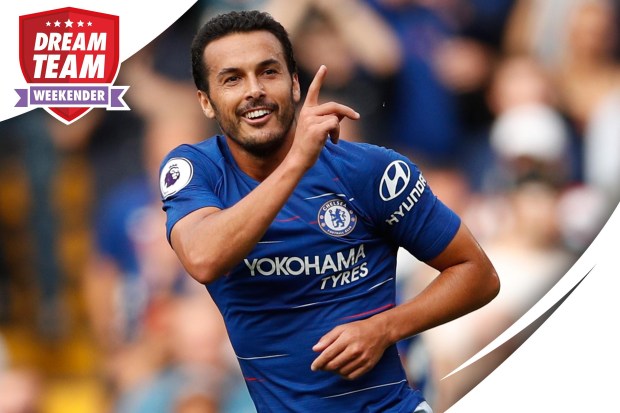 It’s probably been a while since you thought about your Dream Team line-up, isn’t it?

So we’re here to help you decide which transfers to make ahead of the weekend, with our five favourite picks.

Fantasy football tips: 5 players you NEED for Game Week 5 in the Premier League

Chelsea’s new goalkeeper has looked solid enough between the sticks so far this season (which is probably what you’d expect for the world’s most expensive goalie) and he’ll certainly fancy his chances against Cardiff this weekend.

After all, Neil Warnock’s side have struggled to score goals since winning promotion back to the Premier League and will likely struggle to break down the Blues defence at Stamford Bridge.

Speaking of clean-sheet bonuses, how about adding one of Chelsea’s best points-scoring defenders to your ranks?

Alonso is by-far the best defender on fantasy football this season, racking up a tasty 40 points following some standout performances.

In fact, new boss Maurizo Sarri was so impressed with him after their win over Bournemouth last time out that he described him as the ‘best left-back in Europe’.

It’s a bad time for Spurs to play free-scoring Liverpool, with Mauricio Pochettino’s side missing goalkeeper Hugo Lloris and Dele Alli through injury.

What’s more, Harry Kane is seemingly a little out of form at the moment, so they’ll be looking for some extra firepower from somewhere else.

Step-up Brazilian hot-shot Lucas, who’s already been one of the stars of the season with a lovely haul of 27 points, thanks largely to those two goals against Man United. If anyone’s going to unlock Liverpool’s defence, it’ll be him.

Hardly anyone picked Pereyra at the start of the season, but after helping Watford win all of their games so far he’s steadily become a bit of a Dream Team favourite.

With 25 points to his name – with three goals and a Star Man bonus to boot – he’s certainly a man in-form at the moment.

Will this be the year he finally wins the Premier League Golden Boot?

With three goals to his name this season, he’s certainly heading in the right direction.

He’ll want to add to his tally this weekend against Fulham, especially as Cottagers boss Slavisa Jokanovic seems to be rotating his goalkeepers at the minute.

Play the easiest fantasy football game around this weekend…

Want to show off your fantasy football credentials every weekend? Then Dream Team Weekender is just for you – and it’s absolutely free to play.

And the best thing about it? If you don’t win, you’ve only got to wait until the following weekend for another shot at the prize money.

Sound like a bit of you? Sign up to play Dream Team Weekender here and join the fun.