We all know there’s two types of points-scorers when it comes to fantasy football.

The Harry Kane’s of the world, who rack up the mega-points by scoring goal after goal.

And then there’s the playmakers – like Kevin De Bruyne – who notch an assist or two every weekend. 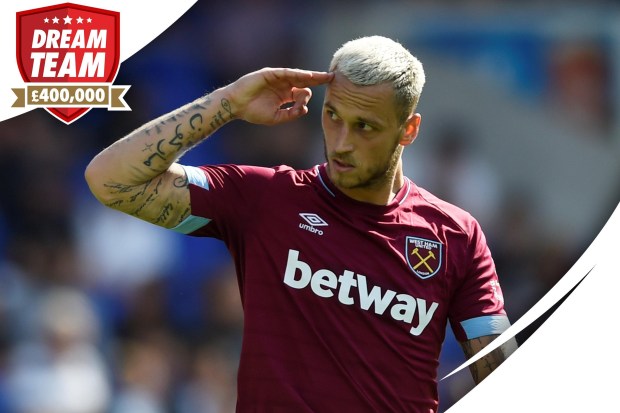 But sometimes, we come across a player who can do BOTH.

That’s right, these mythical players certainly do exist and we’ve listed seven of them below that we think will notch plenty of goals and assists this season.

Premier League fantasy football tips: 7 players likely to get BOTH 10 goals and assists this season

Fresh from his World Cup-less summer, Sane will be looking to build on his fantastic season last term with an even better run out this time around.

The German notched 10 Premier League goals and 15 assists on his way to securing the PFA Young Player of the Year award, and we fancy the same sort of feat again this season, even if he will be battling Riyad Mahrez for a place in the team.

Easily one of our favourite players to pick on fantasy football, Eriksen took home a total of 220 points last season thanks to his 10 goals and 10 assists.

Christian Eriksen: No player has made more key passes than @ChrisEriksen8 (48) in the Premier League in 2018

With Spurs failing to make any transfers this summer (for the time being, anyway), we feel there’s extra onus on the current crop to step up this season.

Wouldn’t hurt if you hit a few more free-kicks this term, Christian.

Sanchez never really got going last season, and things only got worse when he moved to Man United in January.

He really struggled to get to grips with his new surroundings, but judging from his pre-season performances and the fact that he didn’t play at the World Cup over the summer, the Chilean could be on the cusp of a great season, brimming with goals and assists.

Mane’s been handed the No.10 shirt this season following the January departure of Philippe Coutinho, but will that convert into more goals and assists?

The Senegalese forward was part of Liverpool’s fantastic attacking trio last season, that reached the promise land of the Champions League final.

They’ll be hunting down the Premier League title this season, so we could see even more from the likes of Mane, Mo Salah and Roberto Firmino, especially with Naby Keita pulling the strings in the midfield.

These are exciting times for West Ham fans, with the club bringing in several decent players to help new manager Manuel Pellegrini challenge further up the table.

And that could mean an even bigger role for Arnautovic, who was easily the Hammers best player last season.

With creative types like Felipe Anderson and Andriy Yarmelenko around him, we fully expect him to hit double figures for goals and assists.

Sterling was instrumental to England’s World Cup run over the summer, and will surely enjoy himself as one of the spearheads of Man City’s attack once again this season.

Sterling has always been an assist-king dating back to his Liverpool days. But under Guardiola, little Raheem’s added goals to his game and we’re hoping to see even more of them this season.

When Liverpool snapped up Salah from Roma last summer, we reckon they splashed the cash mainly for his playmaking ability.

He notched 24 assists during his time in Italy, with his goalscoring prowess raw but fairly uninspiring.

Of course, he went absolutely nuts for the Reds in terms of goals last term, ending up with the Premier League Golden Boot.

Even so, he’s still capable of setting up a goal or two, which is probably why he starts this season as Dream Team’s most expensive player.