Alisson is at the centre of a transfer tug of war between Liverpool and Chelsea with the deal big news for both sets of supporters and fantasy football fans.

The Brazilian goalkeeper has been heavily linked with a move to the Premier League this summer, and is rumoured to be departing Roma in a deal that could be worth around £62million.

The 25-year-old started all five of his country’s games at the World Cup and was Tite’s first choice over Man City’s Brazilian goalkeeper Ederson. 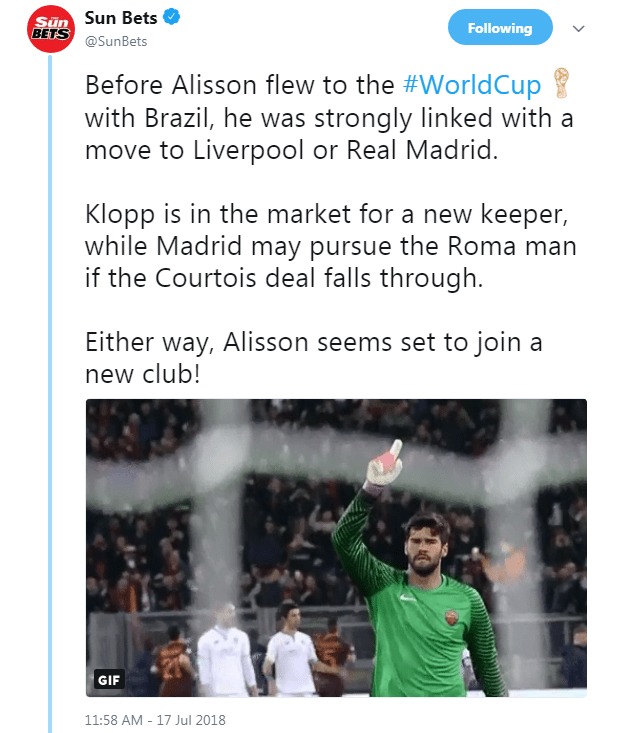 The Brazilian shot-stopper played a crucial role in his side’s coupon-busting run to the Champions League semi-finals, before they were beaten by Liverpool at the penultimate step.

After making 31 appearances for Brazil, as well as having experience of Europe’s elite competition, it’s no surprise to see that Alisson is on the radar of so many top clubs.

Liverpool fans are so excited by the potential new arrival that they have even began to track private jets that could belong to the Roma man.

He’s more than your average goalkeeper.

The Brazilian is widely praised for not only his shot-stopping abilities and command of his area, but also for another trait.

Alisson is known to be very capable with the ball at his feet, with his impressive distribution perhaps the standout ability of the in-demand stopper.

If Liverpool or Chelsea were to agree any deal, they would be buying themselves a player in a similar mould to his countryman Ederson.

What could Alisson bring to your fantasy football team?

According to Dream Team’s ratings provider WhoScored, Alisson had an impressive season in Serie A with Roma at 7.00.

The Brazilian was the highest-rated keeper in the league and made it into the Serie A team of the season.

Liverpool’s current goalkeeping options fail to compete with Alisson’s form at Roma. Both Loris Karius (6.70) and Simon Mignolet (6.49) had a lower average on WhoScored last season.

The Roma man also ranks higher than both of Chelsea’s goalkeepers, with Thibaut Courtois (6.63) and Willy Caballero (6.65) scoring lower than the rumoured new arrival.

Alisson moved to Roma from Brazilian side Internacional in 2016 for just £6million.

The 25-year-old was originally forced to act as the understudy to Wojciech Szczesny after the Polish international was on loan from Arsenal.

The following year, after Szczesny signed permanently for Juventus, Alisson was given the No1 jersey and the rest is history.

So, what will he cost on Dream Team?

As any transfer to the Premier League is yet to be officially confirmed, Alisson is still without a price for this season’s fantasy football game.

If Alisson does make the move to English football, we estimate him to cost Dream Team managers around £4m, judging on the prices of Ederson and David De Gea last season.

Whilst the new season doesn’t get underway until August 11 you can already pre-register for the Dream Team game here.

If you’re an existing Dream Team player you can now pre-register for new new game online and on the app.

Once you’ve followed the link above simply click on this banner to complete the process.