We’re very excited for the World Cup this summer.

And fantasy football fans are being truly spoilt by the Dream Team World Cup game which is now alive and kicking. 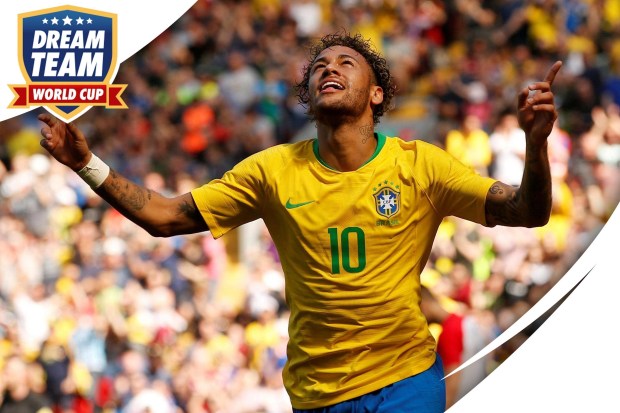 It’s completely free to play, there’s £175k up for grabs in total and you can pick all the best players in the world.

What more could you want?

So ahead of the big kick off we’ve had a look back at the Dream Team heroes of the last World Cup in 2014.

Just don’t expect to see a certain Lionel Messi in our top 10, as the Argentinian magician failed to make it. Sorry, Leo.

It might be hard to imagine now, but Blind left the last World Cup as one of the tournament’s breakout stars.

Notching two assists in Holland’s opening game against Spain, the wing-back also scored his first goal for his country in their 3–0 win over Brazil in the third-place play-off.

On the back of his and Holland’s brilliant campaign, Blind secured his move to Man United, but is seemingly on his way out of the club this summer.

De Vrij was a mainstay in Holland’s surprisingly solid three-man back-line that enjoyed a rip-roaring ride to the semi-finals.

The centre-back played in every match of their tournament and even scored in the 5-1 win over Spain.

Recently, he hit the headlines for his game-changing error in Lazio’s final game of the season against Inter, virtually gifting the Milanese side their place in the Champions League next season.

And it’s all the more awkward considering he’s rumoured to be on his way to Inter in the summer.

Four years ago, Romero was Argentina’s first-choice shot-stopper despite his lack of game time for Monaco that season.

Priced at just £4.0m on the game, Romero proved to be a smart choice between the sticks – even earning the Man of the Match award for his penalty shootout heroics in Argentina’s semi-final win over Holland.

He might be one to consider for your Dream Team World Cup side this summer too, as he’s expected to be his country’s No 1 once again.

Germany’s ever-reliable centre-back was one of the pricier options in defence four years ago, valued at £5.5m.

But you more than got your money’s worth, as the defender played in all-but-one of Germany’s games and even managed to score two goals on the way.

Seemingly at his peak this season and going into this summer’s tournament off the back of consecutive Bundesliga titles with Bayern, Hummels could well be one of the best players to pick on Dream Team.

What a difference four years makes.

In Brazil, Schurrle was one of Germany’s World Cup winning heroes, scoring against Algeria in the round of 16 and twice against the hosts in that infamous 7-1 win.

But his biggest moment came in the final, when he provided the cross for Mario Gotze’s winning goal in extra-time.

As for this summer? Not even in the squad.

Neuer was undoubtedly the best goalkeeper in the world when Germany won the World Cup four years ago.

And he probably still is today, despite what your Man United supporting mates will tell you.

In Brazil, Neuer kept clean sheets against Portugal and the United States, as well as against France in the quarter-final.

He conceded late in the 7-1 win over Brazil, but went onto win the Golden Glove award as Germany defeated Argentina in the final.

We really are going to miss the Dutch at the World Cup this summer, aren’t we?

Four years ago, they were the surprise package under the guidance of van Gaal and Robben was the star of the show.

The Bayern winger scored twice in their opener against Spain, as well as in their group clash with Australia.

He then won the controversial penalty in the win over Mexico in the last 16 and converted one of the penalties in the shootout win against Costa Rica.

No doubt he’ll be watching it on the tele like the rest of us.

What an insanely awesome midfielder this guy is, eh?

Four years ago, Kroos notched four assists and two goals – both against Brazil in the 7–1 win – as Germany went onto win the tournament.

Priced at a bargain £4.5m on the game, we reckon he’ll be a bit more expensive this time around having won multiple honours with Real Madrid since then.

Always one of the first names on the team-sheet whenever Germany play, Muller netted five goals in Brazil – including a hat-trick against Portugal – as they went all the way to the final to lift the trophy.

In fact, Muller has scored at least five goals in each of his first two World Cups, and will likely be one of the pricier options on the game this time around.

James was undoubtedly the breakout star of the last World Cup, leading Colombia all the way to the quarter-finals and ending up with six goals and two assists for his efforts.

Perhaps best remembered for his Puskas Award-winning volley against Uruguay, many believe James should’ve won the Golden Ball award ahead of Lionel Messi, and none of us were particularly surprised by his move to Real Madrid not long after.

James will likely be one of the standout players in Russia this summer as well.

He joins up with Colombia following a decent loan spell at Bayern this season, but could be a little more expensive than his 2014 price of £3.5m.