Fantasy football returns this weekend, with two massive games to look forward to on Saturday.

And then there’s the small matter of the Manchester derby, with City hosting United in a game that could crown Pep Guardiola’s side as Premier League champions. 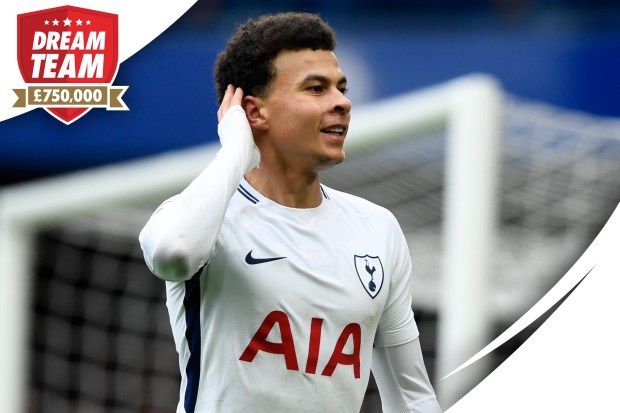 With all that and more in mind, who should you go for in your Dream Team line-up this weekend?

Arsenal have enjoyed a slight upturn in form in recent weeks, with decent wins against Milan (over two legs), Watford and Stoke.

Next up they face lowly Southampton, who look completely down and out at the moment after their defeat to West Ham last weekend.

The Saints look completely incapable in attack and we reckon Cech and his band of defenders will enjoy a fairly easy day of it at the Emirates on Sunday.

It must be great to be a Liverpool fan at the moment.

Their stunning 3-0 win over Man City in the Champions League during the week will leave them feeling buoyant ahead of Saturday’s Merseryside derby.

And we really fancy the look of van Dijk for this one, with his stunning debut performance against the Toffees back in January still fresh in our memory.

Alli’s back, after a rather difficult season.

The England midfielder was outstanding for the Dream Team managers who picked him last year, but has struggled to replicate that form this term.

But two goals and a Star Man performance against Chelsea last time out will leave him desperate for more against Stoke this weekend.

We can’t stop thinking about that stunning goal against the Blues last weekend, but Eriksen is more than just a one goal pony.

The Dane has been influential all-season-long, with 178 points to his name – making him Spurs’ top points scoring midfielder.

We say this every week, but Willian has been one of our favourite picks this season.

He’s been Chelsea’s best player by far in recent weeks and is still a bargain compared to his contempararies.

Vardy’s been on fire recently, betting in five of Leicester’s last seven Premier League games. He even scored for England against Italy a fortnight ago.

With 15 goals in the Premier League this season, we’re backing him to hit the back of the net against Newcastle this weekend.

After scoring twice in Arsenal’s 3-0 win over Stoke last time out, the January signing has now hit five goals in his first six games for the Gunners.

We can certainly see him enjoying himself against Southampton on Sunday, so get him in quick before his bargain price sky-rockets.