The crusty old international break is history for the time being, with the Premier League and fantasy football taking centre-stage once again this weekend.

We can’t tell you how excited we are, having watched some of our Dream Team favourites doing what they do best for their respective countries. 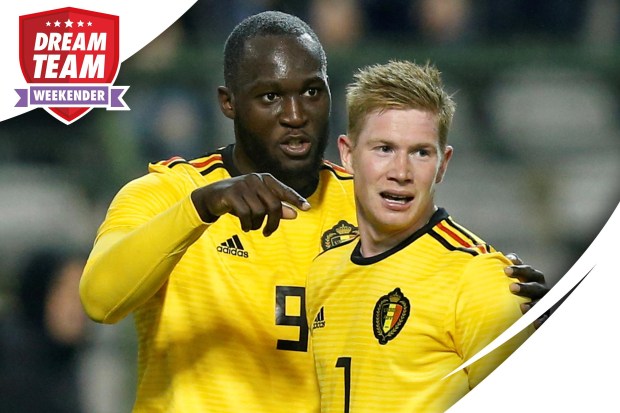 The likes of Mohamed Salah, Gabriel Jesus and Kevin De Bruyne were all on target last week, while Jesse Lingard and Jamie Vardy netted for England against Holland and Italy respectively.

But who should get the nod for your Dream Team Weekender team for Gameweek 30, which includes Liverpool’s clash at Palace, Man City’s march towards the title at Everton and Chelsea facing Spurs at Stamford Bridge?

Both Simon Mignolet and Willy Caballero were given run outs for Belgium and Argentina respectively, and the latter might get the nod for Chelsea with Thibaut Courtois potentially out with a hamstring injury.

Even so, we’re much more inclined to go for Jordan Pickford or David De Gea ahead of this weekend.

Pickford picked up his second clean sheet in as many games for England in Holland, but faces title-hunting Man City this weekend.

Meanwhile, De Gea and United are up against Swansea as the Red Devils look to nail-down that second-place spot behind City in the table.

Kyle Walker and John Stones will both be pleased with their performances for England over the last couple of weeks, but it was a mixed bag for their City teammate Nicolas Otamendi.

He’s been a Dream Team favourite this season, picking up 218 points on the main game and he netted against Spain for Argentina on Tuesday, but also shipped six goals in that game.

It was also hit and miss for Virgil Van Dijk, who captained his Dutch side to a 1-0 defeat at home to England but was on target in their excellent 3-0 win over Portugal.

We’re sure he’ll be content with content with a routine thumping of Palace in the early kick-off on Saturday, but don’t expect Joe Gomez to line-up alongside him, with the youngster limping out of England’s 1-0 win over Holland and is expected to be out for a month.

This is where there’s a plethora of options, with plenty of Premier League midfielders going into the weekend on the back of excellent appearances during the international break.

Let’s start with bad news though, with Arsenal pair Arron Ramsey and Jack Wilshere definitely out for their Sunday clash with Stoke, so look elsewhere with Eden Hazard and De Bruyne both enjoying themselves in the 4-0 win over Saudi Arabia on Tuesday, while West Ham’s Marko Arnautovic notched three goals in total in Austria’s wins over Slovenia and Luxembourg.

However, his Hammers teammate Manuel Lanzini returns with a slight knock and won’t feature in their match with Southampton.

There was goals for Paul Pogba and his Man United teammate Lingard over the break, but we like the look of Leicester’s Riyad Mahrez for Weekender, who managed two assists as Algeria beat Tanzania 4-1.

And we can’t look beyond Salah, who scored four-times against Watford in Liverpool’s last game and hit the opener for Egypt against Portugal last week. What’s the betting he gives Crystal Palace the run around this weekend, as well?

We’re not sure what to suggest for those of you considering Sergio Aguero, as the City striker was released by Argentina last week having failed to recover from his knee injury. So we think his teammate Gabriel Jesus is the way to go, especially after his lovely strike for Brazil against Germany.

And you might want to pair him with Romelu Lukaku up front, who netted twice for Belgium on Tuesday, although a special mention belongs to Vardy after his excellent strike against Italy.

But don’t even think about going for Harry Kane or Alexandre Lacazette, who both face time on the sidelines.