Nobody likes to be disappointed, especially when it comes to fantasy football.

But sometimes, these things happen.

Mohamed Salah’s excellent season with Liverpool has been the perhaps the biggest triumph on Dream Team so far – considering he cost just £4.0m on the game at the start of the season.

The usual suspects have also been excellent, including Harry Kane and Sergio Aguero, while we’ve all been pleasantly surprised by the form of Burnley’s James Tarkowski and Brighton’s Glenn Murray. 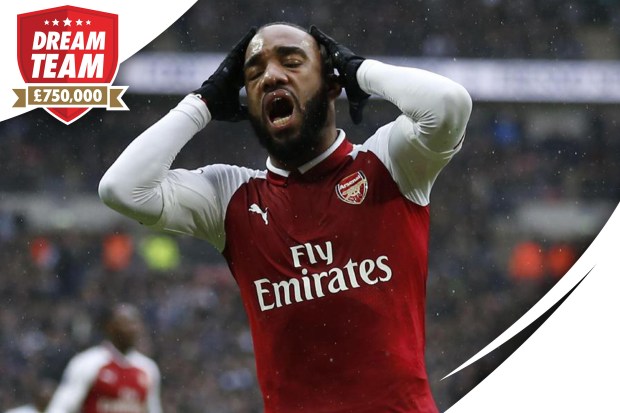 But on the other side of the coin, we’ve been distinctly let down by a number of big names, who either came to the Premier League with a lot of promise or failed to match their heroics of last season.

We don’t know about you, but we instantly think of this guy when someone asks us who’s disappointed us the most this season.

Arsenal forked out £52.6million (if you include the add-ons) for the former Lyon striker over the summer following his exploits in Ligue 1 and their reasoning seemed sound at the time.

Last term, he was the French top-flight’s second-highest scorer with 28 goals and he seemed almost Thierry Henry-esque with his deadliness in front of goal.

But so far, his time with the Gunners has been fairly horrendous, notching just nine goals in the league and 83 points on Dream Team, while the arrival of Pierre-Emerick Aubameyang in January has since relegated him to the bench.

Considering he was one of the most-picked and overly-hyped players at the start of the season, this one went south very quickly.

This might be a little harsh, with 121 points still a decent haul compared to most.

But knowing how excellent Sanchez is usually and how he topped the Dream Team’s points chart last season, we’ve been pretty uninspired by his selection this term.

He’s not been a particularly popular pick on the game this season, with only 9.1% picking him at the moment, while his biggest spike came just after he moved to Man United.

We know he can do better, but his time is running out this season.

Last season, we were absolutely raving about Keane and rightly so. He was awesome for Burnley, firmly establishing himself as one of the must-have defenders in the Premier League. He was even tipped as a potential international successor to John Terry.

Every time I watch Michael Keane United’s decision not to sign him is further justified. A good defender but he maybe reached his ceiling at Burnley.

Of course, Everton promptly threw £25m big-ones at the Clarets, but mid-season change of manager and style have been detrimental to the centre-back’s progress. To put it plainly, he’s gone from a fantasy football favourite last term to a total dead fish.

Last season, Sigurdsson almost single-highhandedly kept Swansea in the Premier League, with 9 goals and 13 assists only really scratching the surface of his influence on the Swan’s campaign.

Love how everyone is going on about Morata, Bakayoko, Lacazette, etc… all being a waste of money…

Then the Toffees paid around £45m for his good name in the summer and we’re not really sure why. The Iceland international is just one of a number of attacking midfielders in the side, which means he’s often been forced into a wide left role.

Often frustrating and rarely able to command the midfield in the way we know he’s capable of, we really just want to see him back at Swansea to be honest.

He notched 147 points on Dream Team thanks to his 16 goals in the league, more than the likes of Eden Hazard, Jermain Defoe and Christian Benteke.

Spurs were big admirers in the summer but he decided to stay put and build on his excellent 2016-2017 campaign.

But with just four goals in the Premier League this season, we’re left wondering what happened to our favourite fantasy football bargain striker?

Eric Bailly: A pretty lengthy injury has kept the Ivorian out of the United’s first-team for much of the season so far, but thankfully he’s back and ready to be your Dream Team favourite once more.

Javier Hernandez: Woefully underplayed and often stuck out on the wing, Hernandez has been horrifically misused at West Ham since joining from Bayer Leverkusen.

Kelechi Iheanacho: Since moving from Man City, we really expected Leicester to be the place where this guy could really tear the Premier League a new one. Sadly, he’s struggled to get in ahead of Jamie Vardy.

Ross Barkley: Another long-term absentee through injury, but that’s just the kicker of Barkley’s disappointing career that once had such promise.

Joe Hart: From Champions League football and the England No 1 jersey to the bench of West Ham. Need we say more?