It’s around this time of the season when you need a fantasy football hero to emerge from the shadows.

And, at the moment, that really should be Anthony Martial.

Martial has responded brilliantly to the impending threat of Alexis Sanchez to his regular playing time.

The French winger – who is still just 22-years-old – has emerged as United’s leading light in recent weeks in the face of some tough fixtures.

He's now found the net in his last three Premier League games – today's goalscorer @AnthonyMartial is your #MUFC Man of the Match! 👏 pic.twitter.com/lDOmvXB1cy

And it means Martial is one of the hottest players around right now on Dream Team.

He’s collected at least a goal and an assist in each of his last four games which read as follows: 8 points, 5 points, 10 points, 8 points.

And he’s repaying the faith of the Dream Team masses who made him the most transferred-in player in the last Game Week, just ahead of Kyle Walker and Virgil van Dijk.

Game Week 22 - Most transferred in players 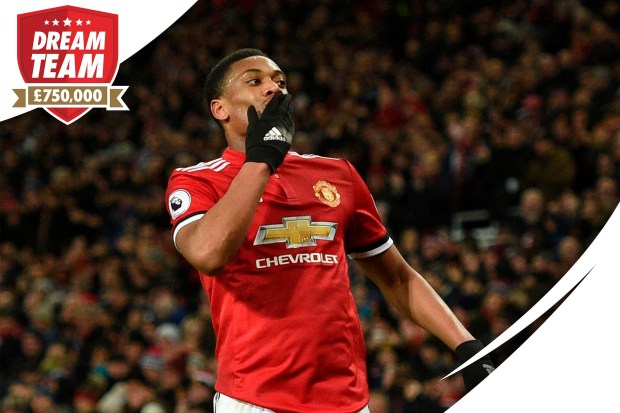 It’s no surprise either.

Only one Red Devils player – Romelu Lukaku – has racked up more than Martial’s 128 points this season, level with David De Gea.

Anthony Martial seems to now occupy the same territory Andy Cole did 20 years ago: his critics appear wilfully blind, and no matter what he doesn't get the credit he deserves. He is a class act, and has scored 11 goals from the wing this season, but many still just shrug… #MUFC

And with a measly price of just £4.5m at the moment on Dream Team his inclusion allows you to retain the more expensive strikers.

Harry Kane and Sergio Aguero are dead certainties given their recent form in front of goal, so Martial’s bargain price allows you to have funds for both.

Despite his moderate WhoScored rating of 6.99 in the Premier League, Martial really is the perfect Dream Team ploy.

Not only is he a regular points scorer, but his comparatively cheap price means you don’t have to sacrifice one of the big boys in Kane, Aguero or Mohamed Salah.