It’s time for another weekend of fantasy football, with Gameweek 20 covering the upcoming Premier League action as well as the midweek FA Cup replays.

That means poor ol’ West Ham, Leicester, Swansea, Bournemouth and Chelsea have to play twice in the next few days. 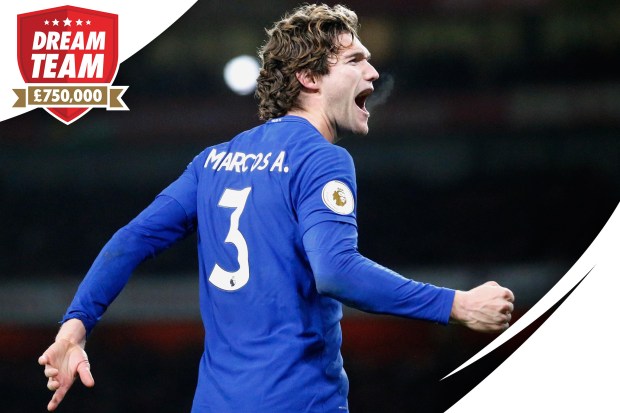 Arguably the biggest game of this round is Sunday evening’s Anfield showdown between free-scoring Liverpool and runaway Premier League leaders Manchester City.

So, let’s dive into our top tips, shall we?

Chelsea will probably play a strong line-up against Leicester on Saturday and rest their big stars against Norwich in the FA Cup on Wednesday – so we expect Alonso to start at the weekend, at least.

And what’s more, the wing-back is in great form at the moment, having scored in three of his last five league games.

He’s currently the second-best defender to pick on Dream Team, while only Alvaro Morata and Eden Hazard have scored more than him in the Chelsea squad this season.

Liverpool’s new centre-back has been by-far the most transferred-in player on Dream Team over the last two Gameweeks.

And with good reason.

Not only has he been a fantasy football favourite over the last couple of years, but his goalscoring debut against Everton last time has showed us all he’s really hit the ground running at his new club.

His next big test will be against Manchester City on Sunday.

Sterling has been in blinding form this season for City as they look to run away with the title.

The England winger has notched 14 goals in the league so far, including five in his last five Prem appearances.

What’s more, with Gabriel Jesus currently out with an injury, expect Pep Guardiola to put further goal-scoring responsibly on his capable shoulders.

This guy can’t stop scoring at the moment.

He notched twice in Man United’s 3-1 win over Arsenal at the start of December, and since then he’s hit five more – including a screamer against Derby last time out.

What’s more, he’s picked up an incredible 43 points on Dream Team in his last four appearances.

On current form, he could have a field-day against Stoke on Monday.

With a number of his teammates on the sidelines at the moment – including Jason Puncheon and Andros Townsend – there will be extra pressure on Zaha to produce the goods for Palace against Burnley this weekend.

Luckily, the winger has been one of the Eagles standout stars this season, with his recent performances against Arsenal and City particularly eye-catching.

Tottenham’s ever-reliable goalscorer has netted in each of his last four home games – including that belter against West Ham last time out.

He’ll be up against a rejuvenated Everton side on Saturday evening, so we can definitely see Mauricio Pochettino calling upon his services, even if it’s only from the bench.

With Jesus currently out of action, Aguero is once again City’s main man in attack (with a little help from Sterling).

And with four goals in his last three appearances, the club’s record-scorer has proven he’s still the man Guardiola can turn to.