Fantasy football is as much about finding those hidden gems as it is picking the favourites.

Yes, the likes of Romelu Lukaku and Sergio Aguero stole the headlines on the opening weekend of the Premier League season.

But which players are going to help you stand up from the rest to emerge as that precious joker in the pack?

Luckily, we’ve done the hard work for you and picked the best bargain players available on Dream Team this season.

So, big-spender, without further ado…

Ogbonna spent long periods of the 2016–17 season crocked by injury, but still managed 22 appearances in the Premier League for West Ham.

The Italian defender barely played after January last season, and the Hammers form noticeable suffered in his absence.

Generally, their win ratio fell rapidly without the former Juventus man in the side, while their goals-conceded rate rose.

At £1.5m, a fit-again Ogbonna could be an absolute steal for your Dream Team, especially with England No 1 Joe Hart guarding the sticks behind him.

The Arsenal loanee made the most of his first-team opportunities at the Riverside, playing 24 times.

He’s returned to the Gunners this summer and could stake a claim for a place in their starting line-up, although he was left out of the club’s pre-season tour of Australia and China. 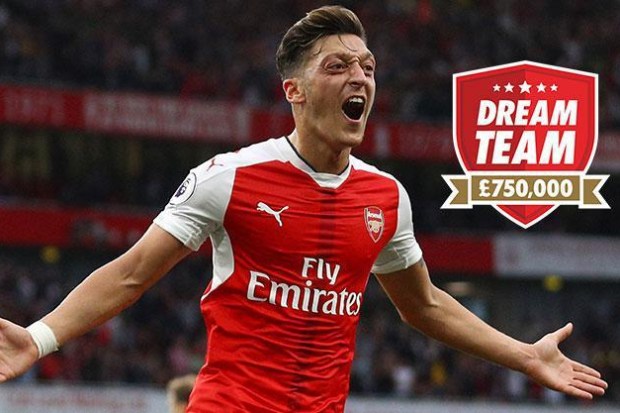 If he does leave North London this summer, Crystal Palace is a likely destination.

And valued at just £2.0m, and having raked up 74 points last season, he could be a very reliable defender to have.

Perhaps not a bargain per se, but opting for McAuley in your team has been one of the worst kept fantasy football secrets of recent years.

By far the cheapest defender on the game to score 100 points or more last season, the West Brom veteran may be the wrong side of 35, but he’s still an adept defender who simply loves to score a goal or two (he notched six in the Premier League last season, an incredible return for a central-defender).

Bournemouth finished a fantastic ninth in the Premier League last season, which is pretty mind-blowing considering they were in League Two not too long ago.

Left-back Daniels typifies the Cherries fine rise to the top-flight, and was a huge part of their success last term.

He raked in 85 points, with the occasional set-piece taker notching three goals in the league.

A worthy addition to any fantasy team.

Reliable full-back Martina made only a handful of appearances for Southampton last season before leaving St. Mary’s as a free-agent this summer.

And with Seamus Coleman’s long-term injury, he could see plenty of action for the Toffees.

With the Toffees Europa League run in mind, he’s surely worth it?

We were pretty surprised when Liverpool sold Allen to Stoke last summer.

Despite being one those players who often splits opinion, the Welshman had a fine season for the Reds and was an integral part of Wales’ run to the semi-final of Euro 2016.

And he flourished with the Potters, scoring six goals in the Premier League as he converted from a sideways-passing anchorman to a dynamic box-to-box midfielder.

He notched a decent 96 points on Dream Team too, and is priced at just £2.0m for the upcoming campaign.

Well worth your small change.

The Scottish attacker notched seven goals for Hull before joining West Ham in January in a tasty £10million deal.

His move to the capital didn’t go to plan though, as he failed to find the find the back of the net for his new employers.

But it’s a new season, and he’s had plenty of time to settle.

And priced at just £2.5m, and with a fine group of players around him, Snodgrass could once again prove to be a shroud signing for your Dream Team.

West Brom forked out £13million for Chadli last summer, which turned out to be money well spent.

He scored five goals and notched five assists for the Baggies, helping them consolidate a respectable 10th place finish in the league.

While he’s not reaching the dizzy heights of some of his former Tottenham teammates, he’s still a reliable points-scoring option and is an absolute steal at £2.0m.

We sure do love this kid – and you should too.

No one really knew who Davies was this time last year, but in 12 months the youngster has established himself in Everton’s first-team and is largely considered one of the most exciting young midfielders in England.

If he manages to build on his fantastic season last term, then he could be worth a gamble at just £2.0m.

That’s right folks, one of the finest creative midfielders in the Premier League is an absolute bargain at £3.0m.

Pretty much Manchester United’s most consistent performer last season, Herrera has all the hallmarks of a world-class midfielder in the making.

He managed seven assists in all competitions last season and was heavily involved in United’s Europa League and EFL Cup successes.

You could certainly do a lot worse than having this guy in your team.

A lot’s happened to Rodriguez in the last couple of years.

Once considered one of the most exciting English forwards around, a couple of lengthy injuries and a lack of game time has somewhat stunted the former Burnley man’s rise.

But a £15million move from Southampton to West Brom this summer could be exactly what the doctor ordered.

And he’s already got things going, scoring a stunning first goal for in a pre-season friendly against Leicester.

We reckon he could return to his very best at the Hawthorns this season – and priced at just £2.0m on Dream Team, he could prove to be an absolute bargain.

Wilson is another English striker who’s seen more of the medical room than the pitch over the last couple of years.

And that’s been a great shame, as he was Bournemouth’s main-man during their Championship-winning season.

Two lengthy injuries since have left him on the peripherals at Dean Court, where he’ll have the likes of Jermain Defoe, Josh King and Benik Afobe to compete with this season.

Still, if he remains injury-free, Wilson could be a good source of goals for only £2.0m.

It’s weird to think that a couple of seasons ago, the Marcus Rashford vs. Iheanacho debate was actually a thing.

While Rashford continued to impress for Man United last season, Iheanacho has found himself very much out of favour in Pep Guardiola’s City side.

The Nigerian started only five times for the Citizens last term, but his young career is set for a boast after he moved to Leicester this summer in a £25million deal.

While he barely got a look in last season, we still remember Iheanacho’s breakout season the year before when he notched an impressive 14 goals in all competitions.

And we think his best is still yet to come, especially playing alongside Jamie Vardy.

Austin didn’t get a fair crack under Claude Puel last season, but maybe new Southampton boss Mauricio Pellegrino will give him more of a chance.

Because on his day, Austin can be one of the Premier League’s deadliest strikers.

The 28-year-old has scored bucket loads for every club he’s played at, be it Kintbury Rangers in the ninth-tier of English football or QPR during their spell in the top-flight.

Priced at just £2.5m, Austin could be worth the risk this season.

The boy’s back in blue.

And with the Toffees allowing Romelu Lukaku to head in the other direction, Rooney could get some serious game time as a striker, no less.

While we can all agree that the 31-year-old’s legs are a bit gone, England’s record goalscorer still knows where the net is.

Just look at this during pre-season.

It seems enough of you are already convinced, with more Dream Team players picking Rooney (20.2%) than Alexis Sanchez on this season’s game so far.

He’s back – and if he’s anywhere as lethal as he was in front of goal during his first spell in England, West Ham have poached a real gem.

Javier Hernandez remains a Manchester United fan favourite after several excellent years at Old Trafford and many big clubs eyebrows raised when he moved to east London this summer.

‘Little Pea’ has the fifth best goals-to-game ratio in Premier League history by averaging one every 130.2 minutes, so we feel at £3.5m he could cause some real damage.

Which players should I pick?

Alexis Sanchez was the game’s top points scorer in 2016/17 after a stunning individual season for Arsenal, scoring 29 goals and racking up 13 assists in all competitions.

But the Chilean had the likes of Zlatan Ibrahimovic, Sergio Aguero and Christian Eriksen hot on his heels for the accolade.

Attacking players, by virtue of actually putting the ball in the back of the net, tend to score juicier points wise, but clean sheets are just as important so you can’t neglect the trusty goalkeepers who have been dominating fantasy football either.

Harry Kane has been revealed as the most expensive player on the Dream Team game this season at £8m, with Sanchez (£7.5m), Aguero (£7m) and Eden Hazard (£7m) not far behind.