After two disastrous World Cups in a row it’s easy to forget there was a time when England were expected to achieve big things in the greatest sporting event on Earth.

Expectation before France 1998 wasn’t quite on par with 2002 or 2006 but between David Seaman, Tony Adams, Paul Ince, and Alan Shearer, England had a strong spine to build around.

The rest of the squad included promising youngsters such as David Beckham, Paul Scholes and an 18 year-old Michael Owen. More on him later.

Ultimately it was potent heartbreak that could only be induced by watching an England football team; yet there was no disgrace in their performance.

In fact the team were praised for their efforts with many individuals enhancing their reputation. With one notable exception…

1 The formations were typically 90s

Yes that is Darren ‘sick note’ Anderton at right wing-back.

Also, it’s best to imagine all the players in quintessentially 90s baggy shirts billowing in the wind.

We’re talking about a decade in which Noel’s House Party was one of the most popular television shows in the UK, so it’s understandable formations were a little bizarre.

And how about Arsenal flop Nelson Vivas as one of the back three?

3 The drama began after only six minutes.

Seaman brought down Diego Simeone to give away a penalty which was converted by Gabriel Batistuta, the hottest centre forward in the business not in the possession of a Brazilian passport.

England hit back with a penalty of their own after Owen took a dive (something he would repeat four years later against the same opposition) before Shearer fired home in emphatic fashion.

5 Forget the horrors of how it all ended, just focus on *THAT* goal for a second.

Beckham looks up and sees only Owen ahead of him.

The young Liverpool forward’s first touch sets him on his way.

From then on it’s raw pace, bring him down if you dare.

He shifts it onto his right foot in the box then unleashes the finish to end all finishes.

In the following minutes every England fan, either privately or out loud, mused about whether Owen would become the best forward in the world.

He wasn’t far off in his prime was he?

6 Underdone by a training ground routine

With seconds remaining of the first half England fell foul of a training ground master stroke as Juan Sebastien Veron faked to shoot then passed to Javier Zanetti on the end of the wall who collected and finished before Seaman had finished tightening his ponytail.

7 Diego Simeone had a kit malfunction 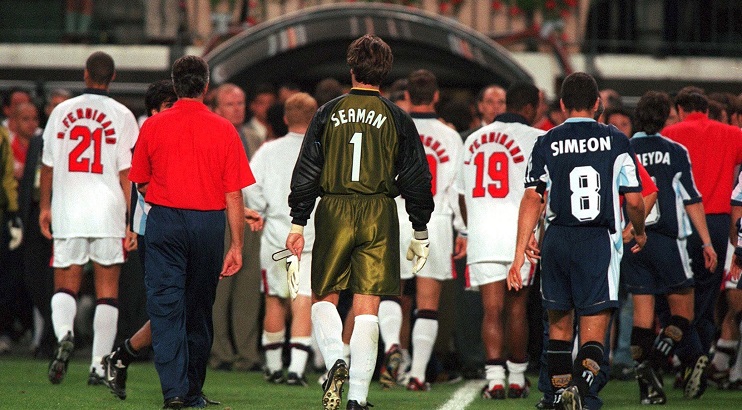 Simeon? The kit man’s had a ‘mare.

8 The moment a national treasure became public enemy number one

Simeone clattered Beckham and then had the audacity to ruffle his curtained hair as he moped on the grass.

England’s golden boy saw red (metaphorically) and kicked out at Simeone, for which he saw red (literally).

9 The fallout was enormous

After the game Beckham became the subject of nationwide hate with some going as far as to hang an effigy of him. 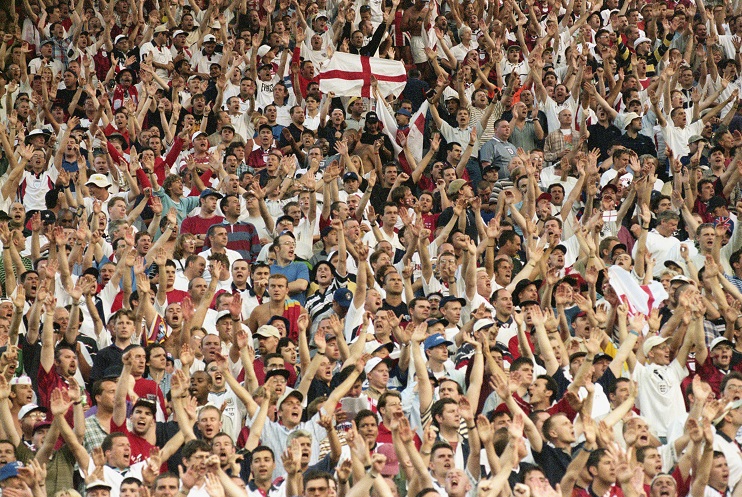 The ten men of England played out of their skins for the remainder of the match.

Rarely if ever have we seen such dedication and commitment from an England team since.

So impressive were England that they actually found the net again before 90 minutes when Sol Campbell headed home from a corner.

But Glenn Hoddle’s men were denied by a harsh referee’s whistle. Shearer’s elbow was deemed to have illegally disrupted Carlos Roa as he tried to punch clear.

12 The injustices were multiple, each one harder to digest than the last

Neither team mustered a Golden Goal (remember that?) in extra time and so predictably it went to penalties.

Shearer and Owen scored their kicks, as did Paul Merson (bonus points if you remembered that) but Paul Ince and David Batty both had their penalties saved by Roa.

Paul Ince had missed his penalty despite a colossal performance at the heart of midfield. David Batty too had hounded down the Argies in extra time, making up for the absence of an eleventh man.

The disallowed goal, Simeone’s overreaction (something he has since admitted), more penalty heartbreak…

Still, what a ride.

Give us that over a 0-0 draw with Costa Rica any day.