This was meant to be Neymar’s World Cup – and it might still be.

But Brazil’s means of inspiration in Russia has so far come from a different source.

It seems strange to refer to the third most expensive player in history as Brazil’s somewhat surprise hero.

But that’s what Philippe Coutinho has become.

Neymar, still perhaps debilitated by the legacy of his broken foot earlier this year, has flattered to deceive in Brazil’s opening two games despite scoring in the dying minutes against Costa Rica.

Either up-ended by some particularly brutal man marking or too guilty of trying to shoulder the creative burden himself, Neymar has largely failed to live up to the tag of Golden Ball favourite.

Coutinho then, has been the man to step up while his old mate falters.

The diminutive playmaker was already one of the best players in the Premier League before his move to Barcelona, where he has taken to life like a duck to water.

But in Russia he’s proving himself the man for the big occasion too with goalscoring interventions in both games so far.

Coutinho has perfected the reverse Arjen Robben – the curl into the far corner after cutting in from the left – and displayed it with a beauty against Switzerland in their opener.

GOAL! What a strike from Coutinho as his shot flies past Sommer to give Brazil the lead! pic.twitter.com/6aQONVsnG8

And, when his country needed him most, he popped up against Costa Rica with the vital breakthrough in injury time.

The Barcelona boy has emphatically capitalised on the added space created by the increased attention on Neymar.

🗣 "Everyone focuses and speaks about Neymar, but the truth is, Coutinho is proving he's a leader for Brazil. Defenders are focused on Neymar, but Coutinho is the one deciding the matches. Coutinho is at Neymar's level."

Why Coutinho can be the man to down Serbia 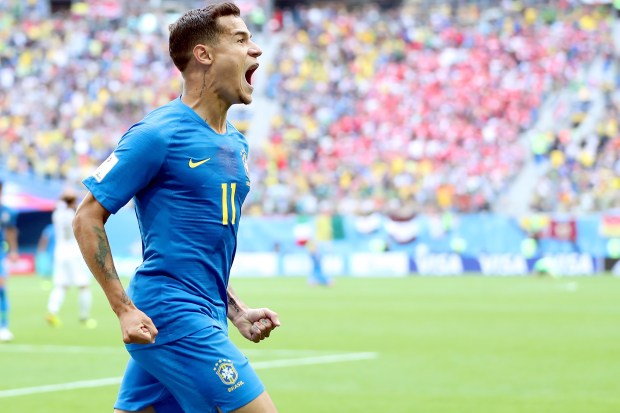 So, with Brazil’s World Cup prolonged participation still hanging in the balance, can Coutinho produce again against Serbia tonight?

The former Liverpool star is 6/4 to bag first but what really takes our fancy is for him to score from outside the area at 6/1, both with Sun Bets.

Coutinho and Neymar are childhood friends, but the former is now emerging from the latter’s shadow.