Oh check you out, backing Germany, Brazil or Spain to win the World Cup.

In the build-up to the World Cup we’re going to be taking a look at the dark horses.

And once we’re done at the stables, we’re going to write articles about the teams with an outside chance of Doing a Madness™ in Russia.

Last but not least, it’s Senegal.

You can make a strong case for Senegal being the best African team at the World Cup, toppling even Mohammed Salah’s Egypt.

Former Birmingham and Portsmouth man Aliou Cisse has been in charge of Senegal since 2015, after he was previously assistant and then manager of the U23 side.

The Lions of Teranga breezed through qualification and will be making their first World Cup appearance since their barnstorming show in 2002.

How will they lineup and are they worth watching?

Senegal played in a balanced 4-4-2 formation for much of their World Cup qualifying campaign. 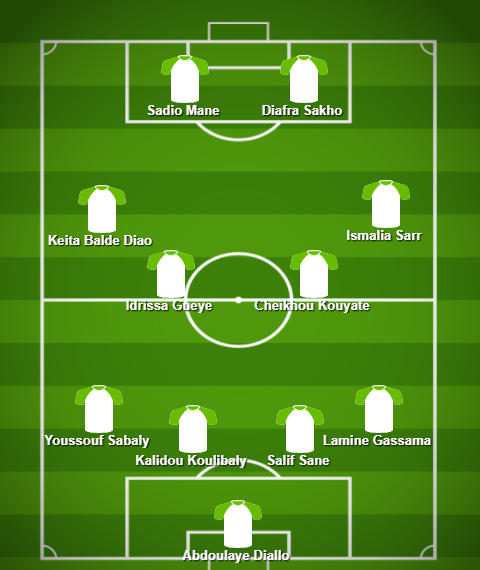 Abdoulaye Diallo is expected to be the man starting in goal for Senegal this summer.

The 26-year-old has found it difficult to nail down a starting spot at Rennes and has also struggled to feature consistently for the national side.

Khadim N’Diaye had been the No1 in all but one of Senegal’s qualifying games, with Diallo not featuring at all as Senegal conceded just three goals throughout their qualifying campaign.

Diallo has however been given the nod in Senegal’s recent friendlies and has done enough to convince Cisse. It seems like a problem area though.

Napoli centre-back and full-time brick wall Kalidou Koulibaly is the defensive lynchpin of the side.

Premier League pair Idrissa Gueye and Cheikhou Kouyate will linkup in the centre of midfield.

Kouyate will captain the side in Russia, with the West Ham man just four appearances shy of half a century of caps for Senegal.

Both Kouyate and Gueye will work tirelessly in midfield, winning the ball and starting counter attacks for the forward players.

The pace of Keita Balde Diao and Ismalia Sarr from the wide areas will cause constant headaches for opposition defenders.

Balde Diao is tipped to be one of the breakout stars this summer, following his successful debut season in Ligue 1 with Monaco.

Mane has been one of the Premier League’s best attacking players since joining Liverpool in 2016 and boasts over 50 caps for Senegal.

You can back the Liverpool man to be top-scorer at the World Cup at 66/1 with SunBets.

Who should we be looking out for and are there any familiar faces?

Senegal’s side is full of top players wherever you look, with several Premier League faces the standouts of the bunch.

Gueye has become one of the Premier League’s best midfield enforcers in recent years, with his tireless playing-style reminiscent of Chelsea’s N’Golo Kante.

The Everton man could earn himself a move to one of Europe’s top sides if he replicates his impressive club performances.

Kouyate had an underwhelming season for West Ham in what has been a turbulent few years for the club.

The towering midfielder will hope to put his poor club form behind him this summer when he captains the Lions of Teranga in Russia.

Despite being 28-years-old, the Rennes striker is a relative novice on the international stage, with only nine caps to his name.

Mane rounds off the Premier League contingent in the Senegal starting eleven that we are likely to see this summer.

His goal in the Champions League final gave Liverpool a split second of hope against Real Madrid.

It’s that ability to perform at the highest level that will prove invaluable in Russia.

Mane will have a slight position change from his usual wing role with Liverpool, but let’s face it, he was pretty much given license to roam wherever he wanted in the Red’s flexible attacking trident.

He is finally going to the main MANe in a team, after spending much of the season in the shadow of Salah.

The exciting attacking options continue for Senegal, with Balde Diao certainly one-to-watch in the tournament.

After impressing in Serie A with Lazio, the winger moved to Monaco last year in a deal worth £28million.

Balde Diao snubbed Spurs to join the Ligue 1 side, where he scored eight goals and registered 11 assists in his debut season in France.

The 23-year-old already has 16 caps and three goals for his country. He’s fully expected to increase that tally in Russia.

Napoli’s man-mountain centre back Koulibaly will have the opportunity to put his name amongst the elite this summer.

He is already widely regarded as one of the world’s best defenders, but could become a household name if he has an impressive tournament.

The towering defender represented France at U-20 level but decided to continue his senior international career with Senegal, the birth-place of his parents.

Koulibaly’s imperial form for the Naples club has seen him be linked with move to the Premier League, in a deal that could be worth in excess of £65million.

Due to his powering stature, Koulibaly is expected to be a constant threat from set-pieces and could definitely chip in with a goal or two alongside his defensive work.

What is their recent tournament history and how did they qualify for Russia?

Senegal are making their first appearance at a World Cup for 16 years.

Their last outing came back in 2002 in South Korea and Japan, where the Lions of Teranga actually performed above expectations, reaching the quarter-finals.

Cisse was the Senegal Captain at their last World Cup appearance, creating a satisfying symmetry as he will be the one leading them upon their return this summer.

The Lions of Teranga were successful over two legs in their playoff match against Madagascar to reach the third round of qualifying for the World Cup.

Senegal were then drawn alongside Burkina Faso, Cape Verde and South Africa in their group.

Cisse’s side won four and drew two of their six games, as they comfortably topped the group.

Mane and co scoring for fun also meant that Senegal ended qualifying as one of the highest scoring teams with ten goals.

Senegal are ranked 27th in the world and have every chance of getting out Group H.

Cisse’s side have been drawn in a favourable looking group, alongside Poland, Colombia and Japan.

It will take a brave man to predict the outcome of such tightly contested clashes.

If they top the group, then a round-of-16 clash with England could be on the cards, that’s assuming the Three Lions finish runners up to Belgium in Group G.

The reward for a shock victory over England would most likely be a clash with Joachim Low’s Germany, if you are to believe the world rankings that is.

Any other reasons to be optimistic?

Despite the abundant lack of major tournament experience amongst the current crop, you can’t help but fancy Senegal to be the surprising package in Russia.

Mane is expected to thrive under the expectation placed on him and, provided that he stays fit, Senegal have every chance of causing some shocks.

With Koulibaly on hand to marshal the back-four, Cisse will be the envy of many of his opposing managers at the tournament.

Senegal have more than enough talent to at least get out of their group, with anything possible from there.

The Lions of Teranga can draw inspiration from the success story of 2002.

Are they worth a punt?

You can back Senegal to cause the ultimate shock in Russia at an enticing 150/1 with SunBets.

Visit the rest of the stables