Generally speaking, the football world is thankful for Lionel Messi.

In every crevice of the globe, you’ll find people who hail the five-time Ballon d’Or winner as the greatest player of all time.

It’s curious then, that aside from Madrid and Madeira, the place where he is least appreciated, is his homeland.

Why Messi is a Dream Team World Cup phenomenon 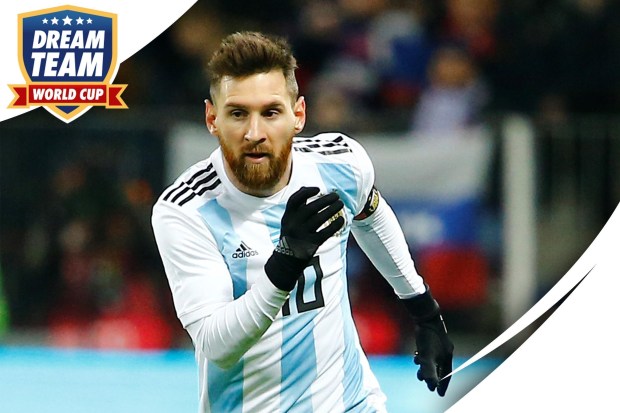 Messi’s relationship with Argentina is complex to say the least; one that is built on both adulation and animosity, agony and ecstasy…

For a visual representation of Messi’s relationship with his compatriots, look no further than the ‘Walk of Glory’ in Buenos Aires.

The mayor of the city ordered a bronze stature of Messi to be built in celebration of his services to the beautiful game.

To be immortalised in your own country is a distinguished honour, one that is bestowed upon very few.

Since it’s erection, the statue has been vandalised by locals. Twice.

It’s safe to assume that the vandals who severed the statue in Buenos Aires believe the man it was constructed in honour of should have inspired Argentina to at least one international trophy by now.

Barcelona have profited greatly from his gift and many Argentinians gaze upon the Catalan club’s trophy cabinet with considerable envy and bitterness.

Messi has featured in four international finals. And all he has to show for it is a quartet of runners-up medals.

And despite the fact he has been their standalone best player for over a decade, many fans resent Messi for taking them to the edge of glory time and time again without a satisfactory conclusion.

There was a risk of Argentina missing out on Messi altogether.

In 2003, Spain plotted to poach the La Masia pupil after Barcelona’s director of football informed the selectors of a young kid with unlimited potential.

Messi qualified for his adoptive home having moved to Catalonia when he was 13.

He was not to know that Spain were about to enter an era of dominance, with or without him, but had he decided to turn his back on his country of birth, he would surely have a hat-trick of international medals in his already well-stocked trophy cabinet.

However, playing for Argentina had been a dream of Messi’s ever since he kicked his first ball.

To ensure there was no smash-and-grab, Argentina hastily arranged a pair of Under-20s friendlies so that they could dress their budding superstar in the famous blue and white stripes.

Messi’s youth debut was a success, at 17-years-old he scored and provided two assists in an 8-0 win over Paraguay.

His senior debut however, would end in tears…

He replaced Lisandro Lopez in the 63rd minute against Hungary in 2005, but by the 65th minute his game was finished.

Sent off for violent conduct after the referee thought he had elbowed his marker, Messi was consoled by Juan Pablo Sorin and Hernan Crespo as he walked off the pitch and reportedly broke down in his tears when he reached the dressing room.

Argentina haven’t won a major trophy since 1993 and the drought is a source of great pain for the football-mad nation.

And because of this, Messi has been found guilt of a heinous crime — failing to replicate Diego Maradona’s 1986 heroics.

In their eyes Maradona’s heir to the throne should have replicated his success by now, but instead he has fallen agonisingly short.

It’s difficult not to sympathise with him.

In the 1986 World Cup final, Jorge Burruchaga latched on to Maradona’s through ball and scored an 84th-minute winner against West Germany.

In 2014, Messi watched on as Gonzalo Higuain wasted a golden chance and then strayed offside at the vital moment against a unified Germany.

In both instances, the protagonists were reliant on their team-mate to provide the final killer blow. One did. One didn’t.

Messi’s decision to cross the Atlantic Ocean at such a young age has also led to him being painted as the villain at times.

Maradona may have spent his peak years in Europe, but he spent six years with Argentinos Juniors and Boca Juniors at the start of his career, and he played a few token games for Newell’s Old Boys and Boca at the tailend as well.

Carlos Tevez and Juan Roman Riquelme are both adored in Argentina for their services to the domestic game.

Having become an honorary Catalan, Messi is almost seen as a faux Argentine.

The twin Copa America final defeats cut Messi deeper than ever before.

In 2015 and 2016, Argentina were felled at the last by Chile in penalty shootouts after 120 goalless minutes.

On the first occasion, Messi was the only one one to score, with Higuain and Ever Banega failing to convert from 12 yards.

The sequel was even more cruel.

For Messi, it was too much to bear.

He announced his retirement from international football at the age of 29.

Some responded with a simple ‘good riddance’.

However, faced with the reality of moving forward without the best player in the world, others started a campaign in an attempt to persuade Messi to reverse his decision.

The ‘Don’t go, Leo’ movement gained momentum rapidly with thousands of fans expressing their appreciation of their talisman’s talent and effort.

A week later, when the wounds of the final had stopped weeping, Messi relented and committed to Argentina once again.

Heading to Russia, Argentina are as dependent on Messi as ever.

The two-time World Cup winners were at risk of a summer’s worth of twiddling their thumbs after an unconvincing qualifying campaign leading up to the last game.

A blockbuster hat-trick against Ecuador ensured qualification from the South American group when it looked for all the world Messi and co would have to face trial by qualifier.

This act of heroism endeared himself to the Argentine public like never before.

However, come tournament time, he will once again be forced to play under a crushing weight of expectation.

With the help of WhoScored, Dream Team’s ratings providers, we’ve worked out Messi would have broken all kinds of records this season – and it wasn’t even his best.

Mo Salah finished top of the Dream Team player rankings this season with 412 points, but Messi completely dwarfs that total.

Hypothetically the Barca man would have scored exactly 100 more points than Salah and would also have shattered Cristiano Ronaldo’s historic Dream Team record of 477 points in a single season.

Messi racked up an astonishing 29 Star Man awards in his 45 La Liga and Champions League appearances whilst hitting the perfect 10 rating a whopping nine times.

His season rating of 8.68 was only bettered by former partner in crime Neymar, who played a lot fewer games due to injury, while he was also the top rated player at the last World Cup.

You don’t need us to tell you; the World Cup is Messi’s playground, so sit back and enjoy the fun.