WHAT do Stoke City boss Mark Hughes and television host Davina McCall have in common?

You’d probably only know this if you’ve paid special attention, as the answer is they share the same watch.

Hughes steps into the dugout with a £340 Polar V800, a decent tracker for exercise. And with Davina’s clutch of fitness DVDs out on the shelves, it’s perhaps less of a surprise that she wears the same.

Keep up to date with ALL the FOOTBALL news, gossip, transfers and goals on our club page plus fixtures, results and live match commentary

Leicester City boss Claudio Ranieri steps out in the same £4,000 TAG Heuer Carrera as Leonardo DiCaprio while Jose Mourinho has the same £25,000 Hublot Big Bang Unico as the controversial Hand of God himself, Diego Maradona. 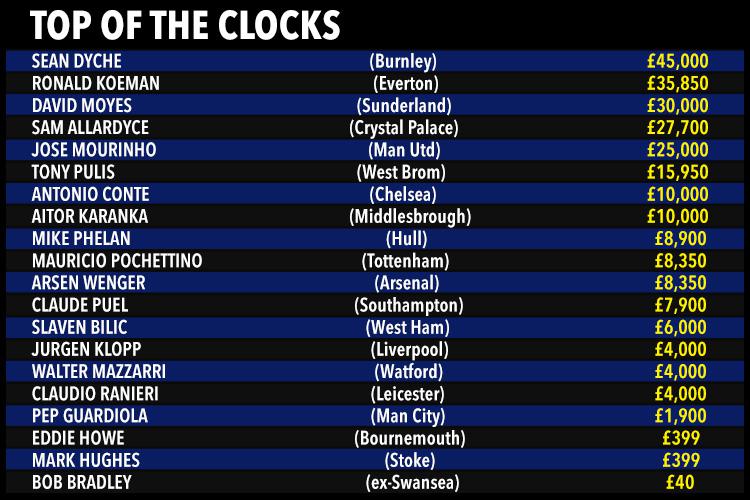 Most Read in Uncategorized

He may be one of the Premier League’s lowest paid managers, but Burnley boss Sean Dyche’s salary isn’t reflected on his wrist.

The gravel-voiced boss steps out into the dugout with a Patek Philippe timepiece on his wrist – which retails at around £45,000. Queen Victoria and Prince Albert were also fans of the Swiss watchmaker.

Researched by MailOnline, Dyche tops the pile for bling, with Everton boss Ronald Koeman having the second most expensive watch (a £35,850 Rolex Sky-Dweller).

Sunderland boss David Moyes sits pretty in third spot with his own £30,000 Patek Philippe version, as worn by Paul McCartney and Ringo Starr.

And he may now be out of work after being sacked by Swansea – but Bob Bradley probably won’t be forced into pawning his £40 Timex Ironman Classic strapping.

This was also good enough for former US President Bill Clinton.

Here, SunSport checks out the movers and shakers in the Premier League world of watches.