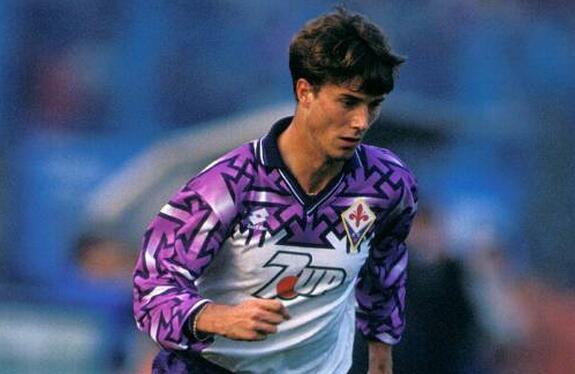 If there is one symbol in the world that nearly everybody avoids at all costs, it is the Swastika.

Well… that is everybody but Hindus, neo-Nazis and of course Fiorentina and Lotto in the early 90s.

And as kit launch failures go, having to burn and bin all unsold replicas midway through their launch season sets the bar of dreadful very very high.

For a club that had been associated with fascism since the Second World War, incorporating one of the most distinctly fascist shapes around into a new away kit seems an unlikely coincidence.

To top things off nicely, the jersey was banned the very same week that every Serie A team announced they would walk onto their respective pitches at the weekend displaying anti-racism banners.

As if karma was to come around and bite Fiorentina where the sun doesn’t shine, the club was relegated to Serie B in the same season despite being on top of the table in the opening weeks.

Relegation for a squad that contained legends such as Francesco Baiano, Stefan Effenburg, Brian Laudrup and Gabriel Batistuta is almost as ridiculous as a Nazi-themed kit!

And let’s not forget that the shirt sponsor was 7up, which of course just made an already sticky situation fizz over completely.

Well played Fiorentina, a truly unforgettable season, but not for the right reasons!