CEO Marco Fassone and sporting director Massimiliano Mirabelli held a meeting – reported to be in London – with super agent Jorge Mendes, and asked about the Ballon d’Or holder.

According to Sky Italia, the pair asked Mendes whether Ronaldo had any interest in leaving the Spanish giants.

However, they do admit that the tone was more questioning rather than with any firm intention behind it.

The pair were reportedly told that Ronaldo would cost at least £179MILLION in a transfer fee and would demand £550,000-a-week in wages.

With the total deal costing between £350m and £400m Milan would be priced out.

Ronaldo has been linked with a move away from the Bernabeu all summer, although it appears as if he is positioning himself to sign another improved contract.

The Portuguese, 32, had been linked with a return to Manchester United, but Jose Mourinho pulled out of what he thought was a dead end chase. 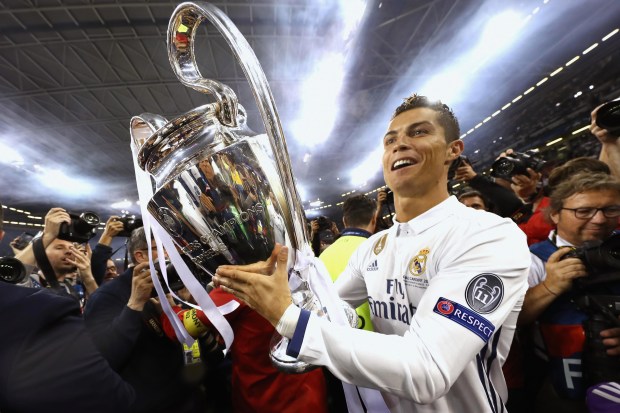 Mendes, Fassone and Mirabelli were in a meeting to discuss potential moves for three of his clients – Renato Sanches of Bayern Munich, Chelsea rebel Diego Costa and Monaco hotshot Radamel Falcao.

Milan have shocked the rest of Europe this season with their massive spending.

The Rossoneri, who have barely competed in Serie A since Zlatan Ibrahimovic left the club in 2012, have spent more than £100million.

Eleven players have joined the club – including the impressive coups of Leonardo Bonucci for £35m, Andre Silva for £30m and Franck Kessie on a two-year loan with an obligation to buy for just £18m.