This season, the south London club may well play TWICE on English football’s most holy turf.

The first trip is already assured after a dramatic penalty shootout over Wigan in the Papa John’s Trophy semi-final at the DW Stadium on Tuesday night.

Sutton’s goalkeeper Dean Bouzanis was the hero at the death after the the two sides were locked at 1-1 at the end of normal time.

The 31-year-old Australian saved two spot-kicks and scored one of his own to enhance what is shaping up to be a fairytale season for the U’s.

It’s no exaggeration to say Sutton’s story is one of the most compelling of 2021/22.

Last term, they won the National League to rid themselves of non-league status for the first time in their 123-year history.

And their first campaign as an EFL club has gone better than even the most optimistic fan would have predicted.

At the time of writing, in addition to having earned a spot in the Papa John’s final against Rotherham, the club are currently fourth in League Two and are hopeful of a play-off place if automatic promotion proves to be too great a hurdle.

In association with our friends at Papa John’s, Dream Team spoke to stakeholders at every level of Sutton United in an attempt to understand the inner workings of what could conceivably be described as a miracle season.

“With the budget we’ve got for players, we were never expected to be high performers in this division,” explained long-time fan Sarah Aitchison. “I always say our ‘best player’ is the team spirit because it’s so hard to pick out individuals.”

Fellow fan Andy Kyriakides echoed the sentiment: “I never thought in my lifetime we’d be at this level. Last season we certainly had the best team, not necessarily the best eleven players, but the best team.”

The 40-year-old mingles with fans in the bar at Gander Green Lane after games and encourages his side to feed off the tight-knit atmosphere of the club when on the pitch, staying true to the spirit of many non-league clubs as they seek to break new ground on the way up the pyramid.

As every fan we spoke to was keen to mention, the secret to Sutton’s success in recent times is that the squad is greater than the sum of their parts.

“Matt Gray is absolutely fantastic at moulding a team that play for each other, “Andy said. “Even finishing in the top half would be an amazing achievement for a team with limited resources.”

It’s relatively common for a newly promoted to hold their own in League Two but back-to-back promotions would be remarkable for a club who were forced to replace their artificial pitch with a grass surface, as per EFL rules, upon making the leap up.

“When I first started coming, 700 would be a good crowd for us,” Sarah told us. “You’re looking at a few thousand now and though you don’t necessarily know everyone, no matter how big the club is growing, its heart is still there. It’s heart is still beating in the same way it always was.”

While that may be touch sentimental for some, Sarah’s words ring true for Sutton as they’re a club known for defying the odds through spirit and camaraderie.

In 1989 they notched a famous win over Coventry, then a top-flight side, in the FA Cup that is remembered as one of the great upsets of its era.

More recently, the U’s met Arsenal in fifth round of the FA Cup in 2017 after outplaying Leeds (then in the Championship) in the previous round to much fanfare.

Midfielder Alistair Smith wasn’t involved against the Gunners five years ago but he believes the current crop of players can harness the club’s history as they seek a remarkable double this season.

Chairman Bruce Elliott remembers the club’s past efforts on the bigger stage fondly.

“That was an unbelievable cup run,” he said of 2017. “We beat some serious football clubs to get a home game against Arsenal. The people involved with it at the time will never, ever forget that.”

For Elliott, April’s Papa John’s Trophy final represents a dream that has matured for a quarter of a century.

“From a personal point of view, it’s the only thing I haven’t been able to do with the club as chairman, is to be at Wembley. My last ambition is to be chairman of the club at Wembley.”

If 2020/21’s National League triumph was Sutton’s greatest ever achievement then Wembley glory would surely run it close.

Besides everything else, there is a sense the club want to give their loyal supporters the joy of first-hand satisfaction after so much of their promotion campaign was played behind closed doors because of Covid restrictions.

Defender Louis John spoke to us about the club’s special relationship with the fans outside the Sutton branch of Papa John’s, which had been temporarily renamed ‘Papa Louie John’s’ in honour of the 27-year-old centre-back and the the club’s cup run.

“During lockdown, a lot of fans paid money to keep the finances ticking over so for us to get to Wembley, hopefully that would repay the debt we owe to the fans.”

The truth is that for all the confidence the players have exhibited in League Two and the Papa John’s Trophy this season, there are many elements of Sutton that remain distinctly non-league – in an endearing way.

Gander Green Lane feels closer to jumpers-for-goalposts down the park than it does the stadiums of Wigan, Port Vale and Portsmouth – three teams the U’s have beaten this season.

The club relied heavily on an army of volunteers to survive lockdown and to prepare the club for life in the EFL.

But that’s the charm of this likeable club and the primary reason their underdog endeavours are worth noting.

Prior to the semi-final of the Papa John’s Trophy, Sarah said: “If I had a bucket list, the one thing on it, watching Sutton play at Wembley.”

In just under a month’s time, Sarah’s dream, one shared by so many others in the community, will come true.

Whatever happens from here, there’s undeniably something special about Sutton. 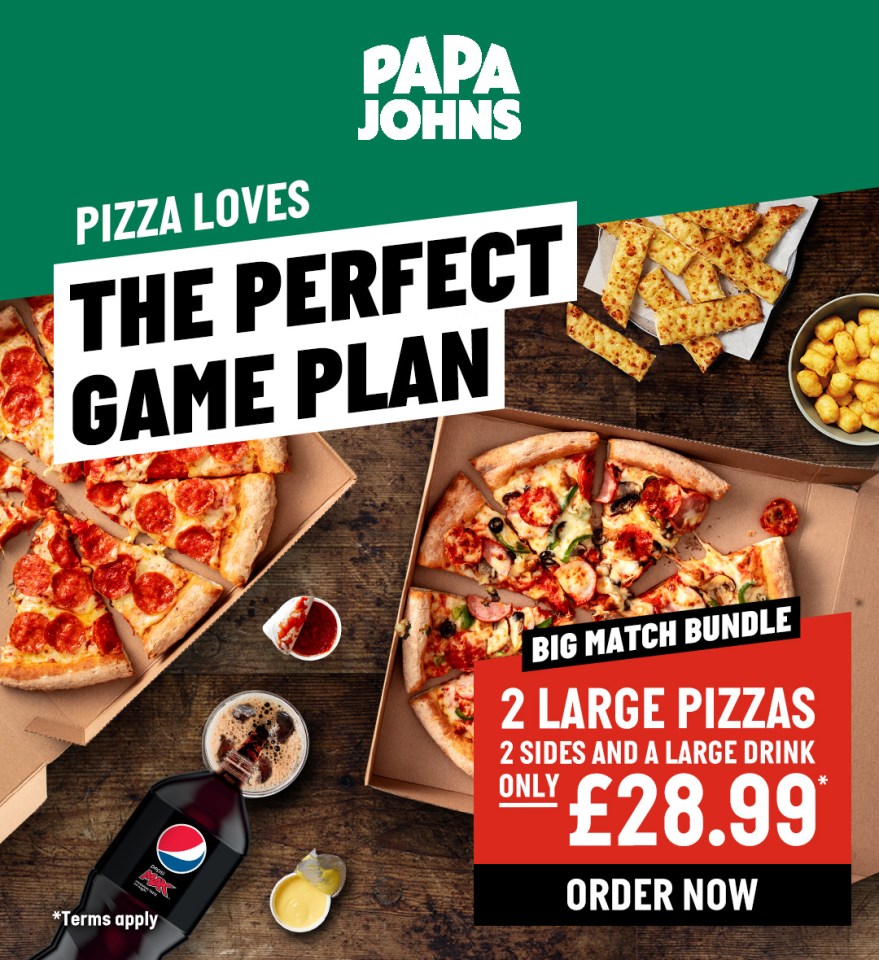 PAPA JOHN’S BIG MATCH BUNDLE: GET TWO PIZZAS, TWO SIDES, AND A LARGE DRINK FOR ONLY £28.99!