You like goals, don’t cha? Well, if that’s the case then we reckon we’ve got plenty of ’em for you this evening my Bets Club buds, as newly-crowned champions Liverpool travel to Man City.

Ahead of one of the biggest fixtures on the Premier League calendar, our mates over at Betway are offering punters £30 in free bets (CLAIM HERE). 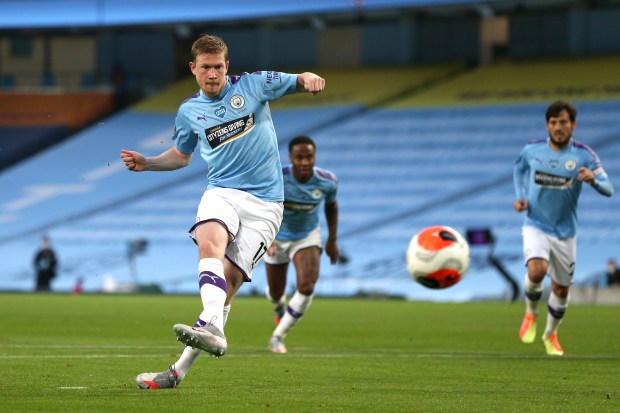 Goals, goals, goals. What are they good for? Quite a lot, actually.

Betway have read the room and offered an exclusive offer for this evening’s match with De Bruyne to score anytime and for over 2.5 total goals in the match.

High-scoring duels are the norm between these two, with an average of over 3.5 goals scored in their last six Premier League meetings.

City currently lead the scoring charts in the Prem this season by netting 77 times, while the Reds are just behind them on 70.

Pep’s boys have also scored at least twice in all seven games of their most-recent home games, while De Bruyne has three goals in four matches since the restart.

Any surprises over the weekend? No?

The FA Cup semis will see Man United take on Chelsea while Arsenal will face Man City – with these four making up 11 of the last 13 FA Cup winners (the answer to your next question is ‘Portsmouth’ and ‘Wigan’).

United needed extra-time but they eventually proved too strong for the Prem’s whipping boys Norwich, while Arsenal and Chelsea were able to get the better of Sheffield United and Leicester respectively – two teams that have really struggled for form since football’s return.

Newcastle have been really excellent in recent weeks (and they’ll be even better when KDB moves to the Toon) but could do little to avoid a pretty routine 2-0 defeat to City.

Chelsea, am I a joke to you?

In the last few weeks, the Blues have won back-to-back games, secured the Premier League title for Liverpool, boasted goals from America’s best export since McDonalds and wrapped up deals for Hakim Ziyech, Timo Werner, Michael Jordan and Scottie Pippen.

But then they take a little trip to hapless West Ham, and everything just… implodes.

The Hammers, in big trouble after three back-to-back defeats without a goal, looked doomed for the drop before this one but fought valiantly against their London opponents and, despite having a goal wrongfully ruled-out in the first-half, were able to comeback and win through a late strike from Yarmalenko.