On Wednesday night, the German curled home an unstoppable strike from 30 yards to put Man City in the driving seat of their Champions League round of 16 tie.

WHAT A GOAL, LEROY SANÉ 😱🤯 pic.twitter.com/Bwm7rNa7T1

Sane’s been absolutely immense in recent weeks, chipping in with three goals and five assists in his last seven appearances as City continue to set their sights on the quadruple.

He’s been particularly important in the latter stages of games, having netted five of his goals in or after the 85th minute this season.

But just like every other member of Pep Guardiola’s team, Sane’s place in the starting line-up is never entirely guaranteed.

That was evident from the opening few weeks of the season, when Sane struggled to get much game time.

He eventually edged back into the side following injuries to Silva and Kevin De Bruyne, but it was certainly a worrying start to the new season for him.

Of course, that was nothing compared to the hardship he had to endure over the summer.

Despite being named the PFA’s Young Player of the Year during City’s record-breaking title success last season, Sane was one of the surprise absentees from the summer’s World Cup.

Germany coach Joachim Low opted against selecting him for his 23-man squad in Russia; a decision that was heavily criticised following the 2014 champion’s surprise exit in the group stages.

The reasoning was not ‘football related’, according to sources in the German media.

Sane’s attitude has often come under the microscope and has been regularly cited as the thought behind Low’s decision to leave him out of his World Cup squad, rather than his ability.

His international teammate Toni Kroos chipped into the debate back in September, saying: “Sometimes you have the feeling with Leroy’s body language that it’s all the same if we win or lose.”

Not the kind of thing you want from one of your team’s best players, eh?

Still, nobody can doubt Sane’s ability.

On his day, the former Schalke starlet is arguably the most exciting players to watch in the entire Premier League, and has often been the difference for City in crucial matches over the last 12 months.

His two goals against Hoffenheim in the Champions League back in December guaranteed City’s place at the top of their group, while his winning goal against Liverpool in January has reignited their title ambitions.

His free-kick against Schalke was also the turning point of a tricky European tie, and will remain a staple of his goal compilations for years to come.

After Wednesday’s game, Rio Ferdinand was full of praise for Sane in the BT Sport studio, saying: “He’s too good – he’s a beautiful footballer, poetry in motion.

“He’s a fantastic player. He’s so smooth, silky in the way he plays. He made a little nutmeg in the game and we were sitting here giggling, but he’s got the end product, he’s a killer in that sense of the game.”

Having come in from the rain following his start-of-the-season exclusion, Sane is in the right position to finish the campaign strongly.

You get the feeling he’s on the verge of something great, and this year could be end of his transition from hot prospect to global superstar. 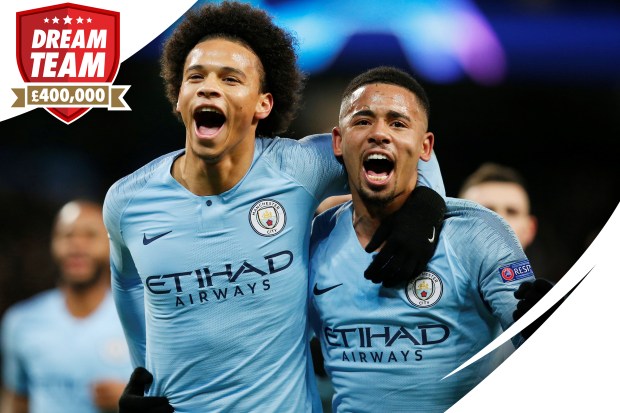