It’s been quite a week for Man City.

Following their disastrous 3-0 defeat to Liverpool in the first-leg of their Champions League quarter-final clash, they then lost out to bitter rivals United in the Manchester derby at the weekend.

And it could be a hat-trick of misery for Pep Guardiola’s side on Tuesday, unless they somehow manage to pull off a memorable comeback in the second-leg.

Guardiola will certainly be under no illusions as he takes on Jurgen Klopp’s free-scoring Reds, knowing his side have shipped six goals in just two games and face a team that’s netted a stunning 37 goals in 11 Champions League games this season.

“To go through you have to make almost the perfect game,” said the City manager on Monday.

“All the conditions have to be almost perfect to go through, so we know it’s going to tough but we have 90 minutes and in football everything can happen.”

And he’s not wrong.

It would take a historic turnaround to reach the semi-final, but the handsome Catalan has a lot of faith in his expensively assembled side.

He added: “My team is extraordinary, it’s not comparable to many others, it’s top, exceptional.

“I will be close to them no matter what happens between now and the end of the season. It’s a joy to be manager of them.”

Extraordinary they certainly are and despite two catastrophic collapses in seven days, City remain the best team in the country.

And even if they’re a little battered, bruised and wound-up, they’re still up to the task of containing a team like Liverpool, while scoring three or more goals this season is certainly not beyond them.

In fact, they’ve won by at least three goals on nine occasions at home this term.

And what’s more, the last five clashes between these two at the Etihad have seen 19 goals scored, which is an average of 3.8 goals per match.

What we’re saying is this one’s got goals in it, that’s for sure.

Why you shouldn't rule out a City comeback 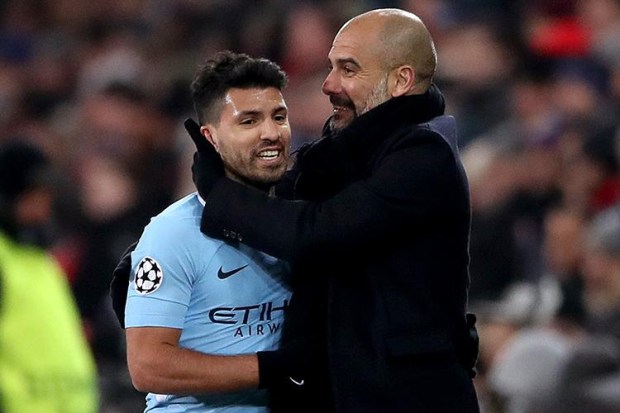 If Guardiola’s side are going to turn this around, they’ll need to draw inspiration from their Premier League clash back in September – when they thrashed the Reds 5-0 at home.

And while Liverpool have corrected some of their early-season defensive frailties since then, they might be a little rattled – with quite a few of their first-team regulars sitting on the sidelines for this one.

Joe Gomez, Emre Can and Adam Lallana, among others, are all out with injuries, while Jordan Henderson is suspended.

But the biggest absentee by-far could be Mo Salah, who is a major doubt after limping out of the first-leg.

The Egyptian has been the Reds’ main man this season, netting 37 goals in all competitions – including seven in the Champions League.

But he didn’t play in the Merseyside stalemate at the weekend and no one really knows if he’s properly shaken off that groin problem.

There’s no such concerns for Guardiola, who’ll be able to throw together a near-full strength line-up at the Etihad, including striker duo Gabriel Jesus and Sergio Aguero, as well as Leroy Sane, Raheem Sterling and Kevin De Bruyne.

Aguero returned from his knee injury at the weekend to make a cameo appearance in the defeat to United and has been the club’s undisputed hero over the years.

The Argentine has also scored in SIX home games against Liverpool down the years.

Aguero has 30 goals in 38 appearances so far this season in all competitions, and if anyone can spark a comeback, it’s him.