The government (and by that we mean football pundits) have been lying to you and it’s time you were made aware.

Two members of world football’s goalkeeping union have spoken out about a much-believed myth.

Borussia Dortmund’s Roman Burki and Leicester’s Kasper Schmeichel believe that goalkeepers should not be blamed for goals conceded at their near post.

The former stood idle as both Son Heung-min and Harry Kane beat him at his near post in Dortmund’s 3-1 loss to Spurs at Wembley on Wednesday night.

As is customary, pundits and fans were quick to criticise the Swiss keeper for committing a cardinal sin of goalkeeping not once but twice.

However, in the aftermath of the result, Burki quoted Schmeichel junior in an effort to dispell the myth around near-post goals.

If you can’t see the post, it reads: “IT’S A MYTH. SOMETHING I HAVE NEVER UNDERSTOOD.

“ONE DAY SOMEONE JUST CAME UP WITH IT AND SAID A GOALKEEPER SHOULD NEVER BE BEATEN AT THEIR NEAR POST.

“NEAR POST, FAR POST, YOU TRY TO COVER IT ALL AND YOU’RE NOT HAPPY IF IT GOES IN ANYWHERE.”

Fair point although minus points for excessive use of caps lock. 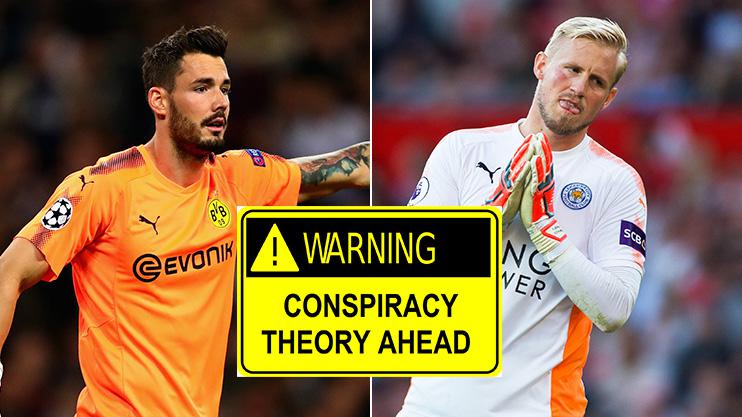 There you have it, just like the moon-landing, I-can’t-believe-it’s-not-butter and slimline tonic, keepers being at fault for goals at their near post is a big, fat lie.

Either that or Burki just doesn’t want to admit his mistakes.

One of the two.