Consider how annoying it is to miss a train.

Then imagine that train is the most important train you were ever planning to take, its destination: your destiny.

Now you’re beginning to understand what it must feel like to wave goodbye to a Champions League final through suspension.

OK, we did say ‘beginning to’.

These 12 unfortunate souls have experienced that all too bitter blow. 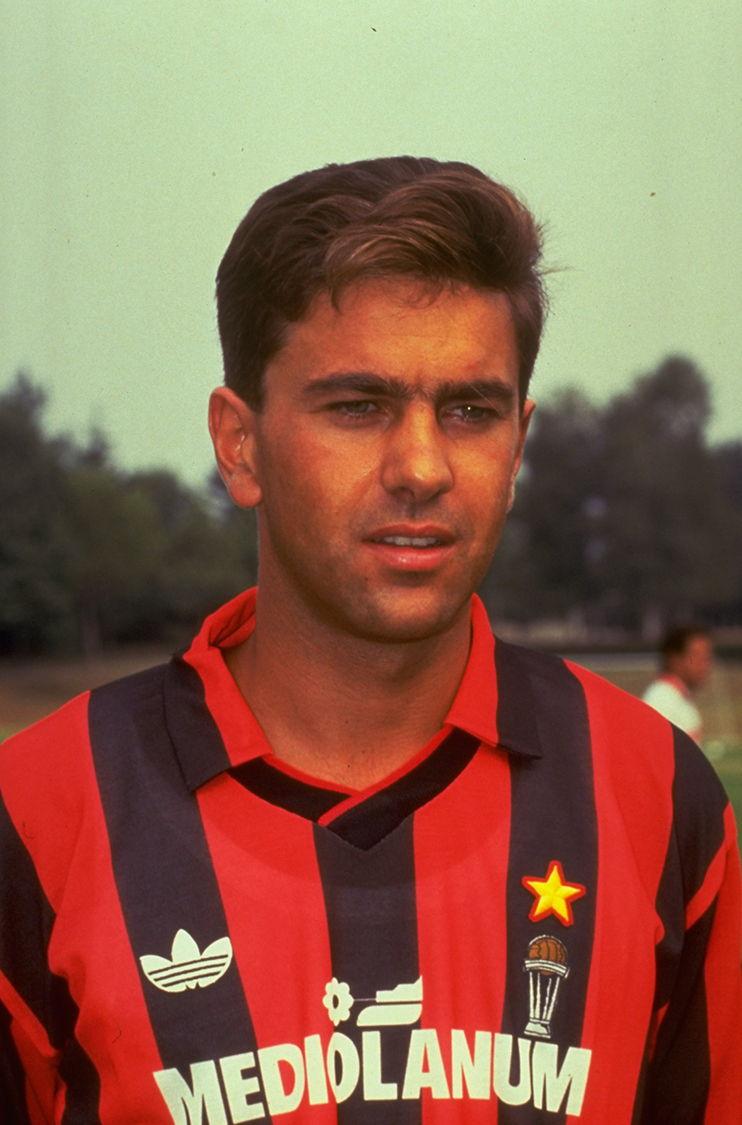 Sent off against a Monaco team featuring Gilles Grimandi and Christopher Wreh, who had somehow made it to a Champions League semi-final, Costacurta cruelly, tragically missed out on his chance to complete a hat-trick of final appearances.

You can put the violins down though, he played in and won two more in his career so every cloud… 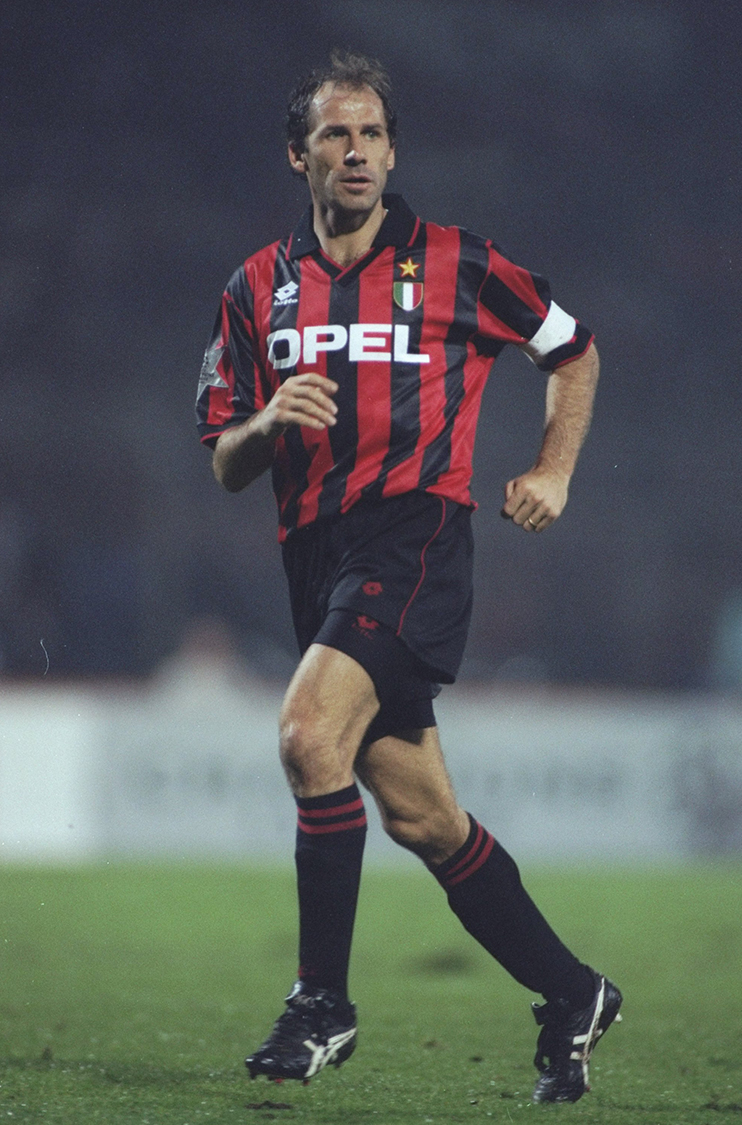 Milan actually lined up for that final without their two most talismanic defensive stalwarts. Booked in that same semi against Monaco, Baresi accrued a cumulative suspension and the Rossoneri needed a stand-in.

Luckily they had Paolo Maldini in reserve so it was no dramas all round.

With a makeshift back-four facing up against Romario, Stoichkov and Bakero, Milan thrashed Barcelona 4-0. As you do. 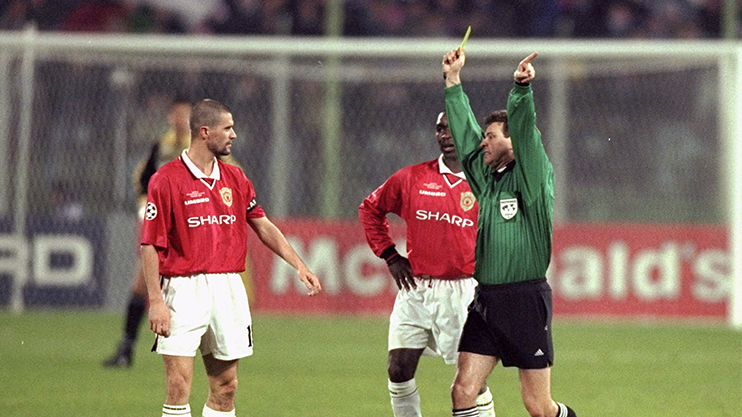 How pumped up was Roy Keane for the semi-final against Juventus? Ask his shorts, which he’d pulled up to nipple-height to indicate just how much he was Up For It.

As indeed he was, rampaging around, getting the opening goal and generally terrorising Juve into letting United win.

It was late lunge on Zinedine Zidane that earned the booking which saw him miss the final, a cruel blow given how much he’d done to get them there.

Still, Keane was typically magnanimous about it all. Just ask Jesper Blomqvist, whose loose pass led to that Zizou tackle.

Keane’s first words to him after the game? “It’s your f***ing fault that I’m going to miss the final.” Teamwork. 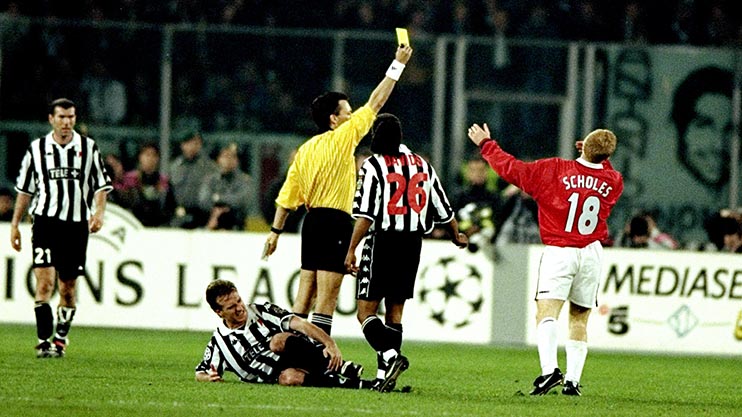 Blomqvist was ultimately the beneficiary of his own ineptitude as he lined up in the final.

He probably took Scholes’ place, after the midfielder out-Scholesed himself in the semi, picking up his customary booking within eight minutes of coming off the bench, for what the BBC called a “two-footed challenge”. 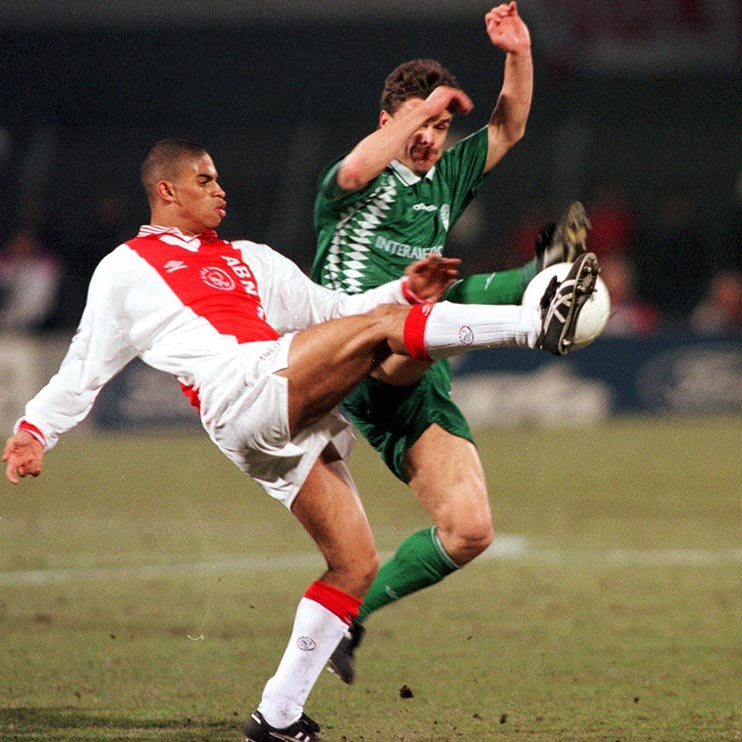 Reiziger really only has himself to blame for this one. Who gets booked in both legs of a double-header against Panathinaikos?

Ajax were defeated on penalties by Juventus as they attempted to defend their crown, but the real sad bit was that this was to be Michael’s farewell game for the club who reared him from babehood, before he scuttled off to AC Milan. 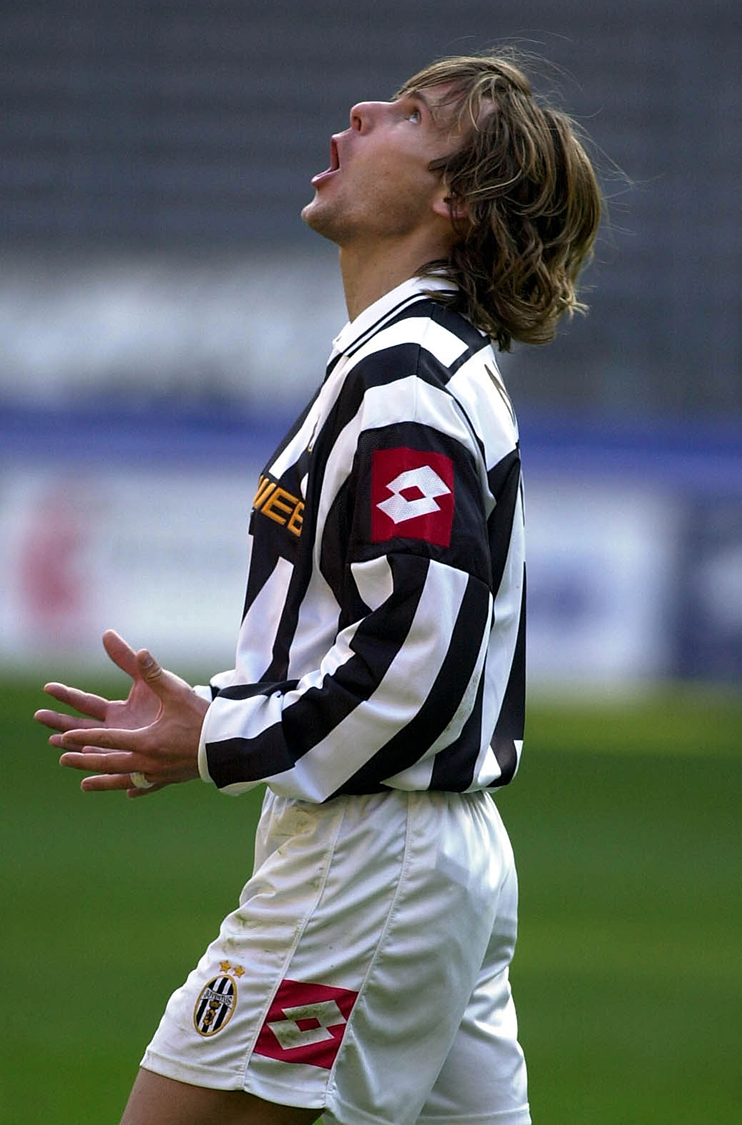 This one was Steve McManaman’s fault.

Nedved had just scored a peach of a goal which effectively put Juventus in the final at the hands of Real Madrid, when McManaman sauntered close to Pavel and basically begged him to lunge in, foul him, then hack him down with a trailing leg.

Thanks a lot, Macca. No wonder the final was a nil-nil bore draw. The best player was up in the stands, never to get near a Champions League final ever again.

And Juve lost on penalties as well. Sniff sniff. 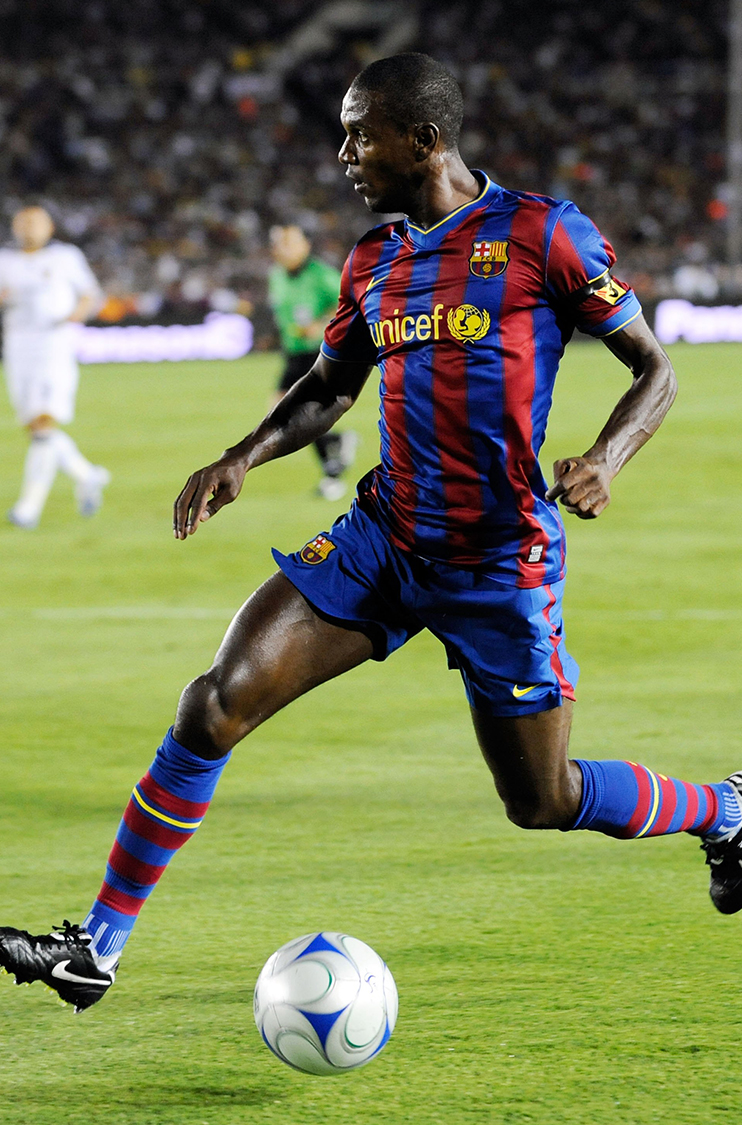 The second-leg of Barcelona’s semi-final with Chelsea in 2009 had everything. Penalty shouts, 93rd-minute winners, Didier Drogba going mental in his flipflops.

Sadly Abidal didn’t get to enjoy any of it, as he’d been WRONGLY dismissed for APPARENTLY scything down Nicolas Anelka when clean through on goal.

Eric liked his contact minimal, as replays showed, but no matter, he missed the final and faced the added insult of then 56-year-old Brazilian Sylvinho deputising for him with aplomb. 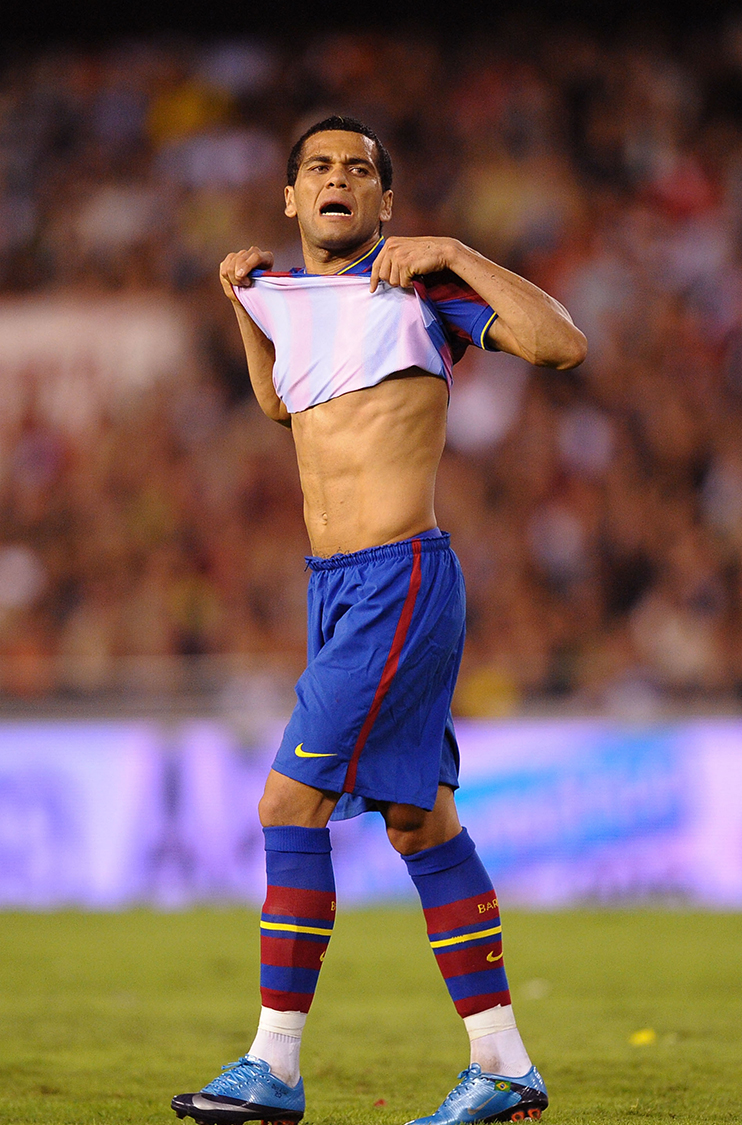 Alves was another casualty of that madcap semi, and his suspension meant that Barcelona had to field Carles Puyol at right-back and who as a makeshift centre-back?

Yaya Toure of all people. 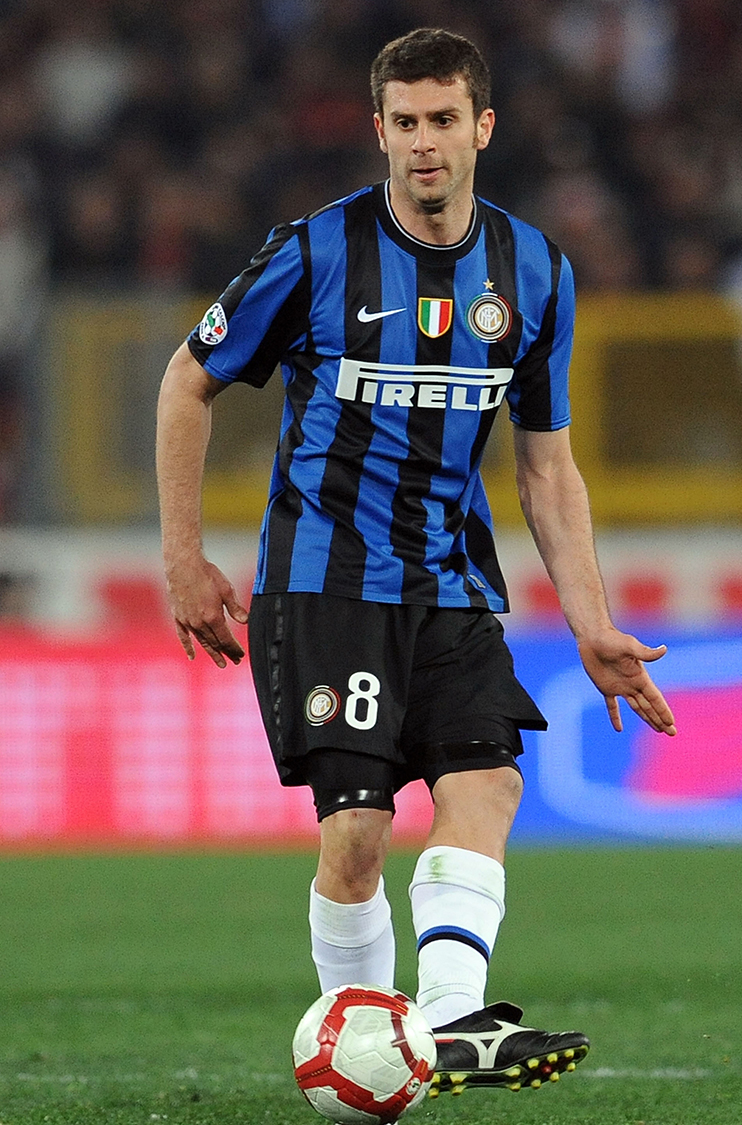 This was a shame.

Not for anyone who loves football, but for those of us who appreciate the most obnoxious gamesmanship.

Motta had been instrumental in stifling the tiki-taka boys in the semis, until he was sent off in the Nou Camp thanks to one of the worst dives in Sergio Busquets’ very extensive repertoire.

Justice was done as Inter held out, then stuffed Bayern 2-0 in the final. 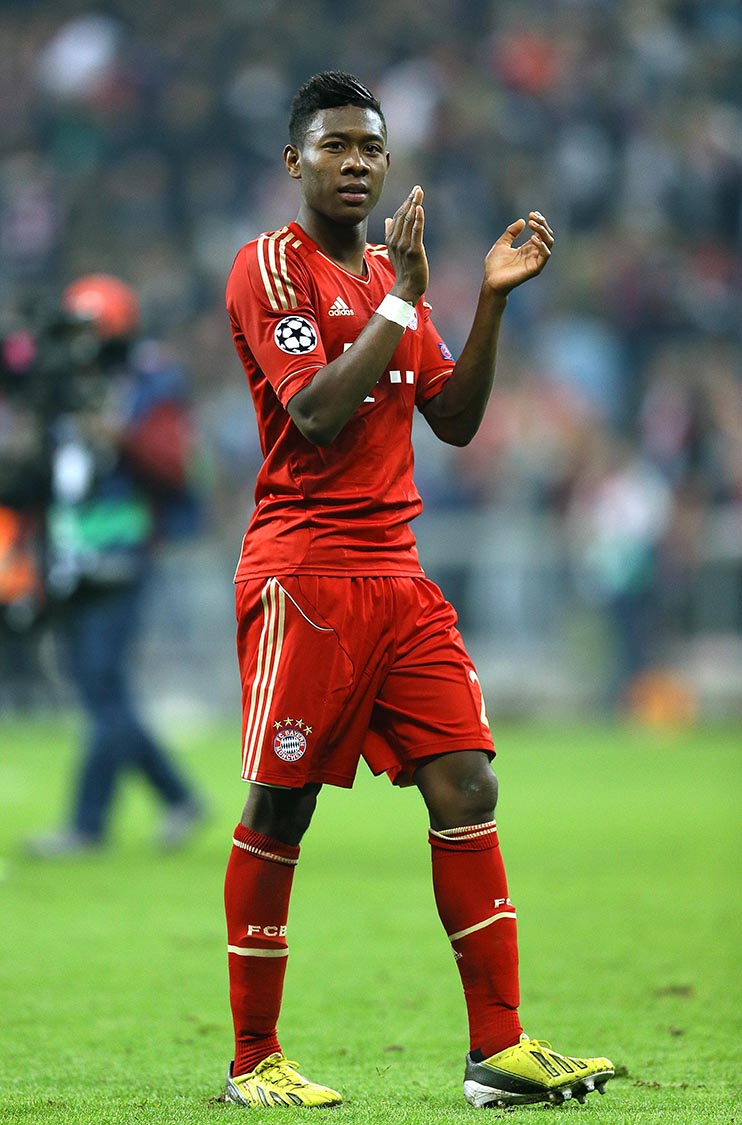 One of the crueller suspensions in Champions League history, Alaba was basically booked for slipping over and having the ball kicked directly against his hand.

Still, at least he was a safe distance from Full Kit John Terry at the final. 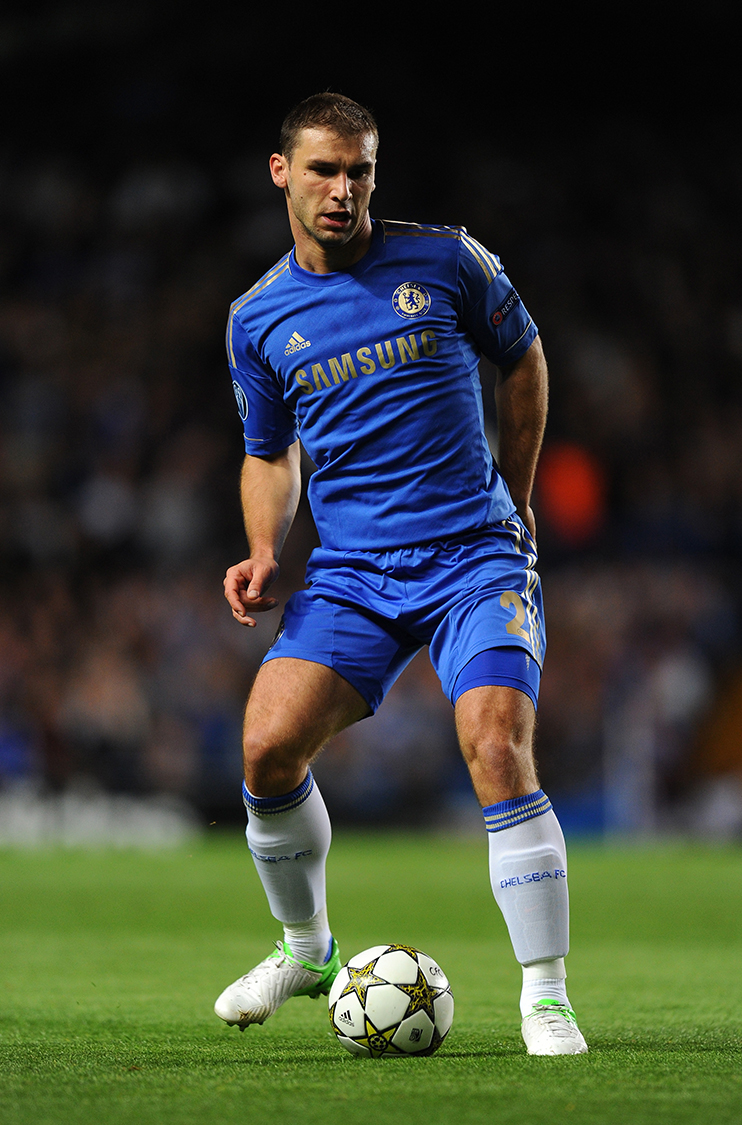 Featuring Geoff Shreeves’ Santa Isn’t Real moment after The Blues’ momentous semi-final victory at the Nou Camp, when the Sky reporter broke it to Branislav (none too gently) that he would miss the final.

It was as heartbreaking as post-match interviews get. The bottom lip wobbled and everything. 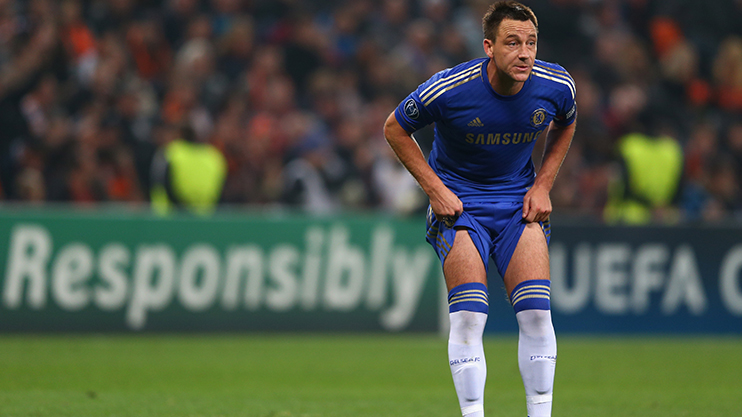 The only heartbreaking thing about John Terry’s suspension was the fact he still got to lift the trophy.

The mindless thuggery involved in him kneeing poor little Alexis Sanchez in the back meant he deserved his punishment.

The gatecrashing of the Chelsea victory party in the final means he deserves eternal scorn.