Game Week 35 was a high-scoring affair to say the least.

Simon Cheesewright racked up more points than any other gaffer when all was said and done, posting a huge score of 191 points!

Let’s take a closer look at how the Walsall fan managed to amass such an intimidating total. 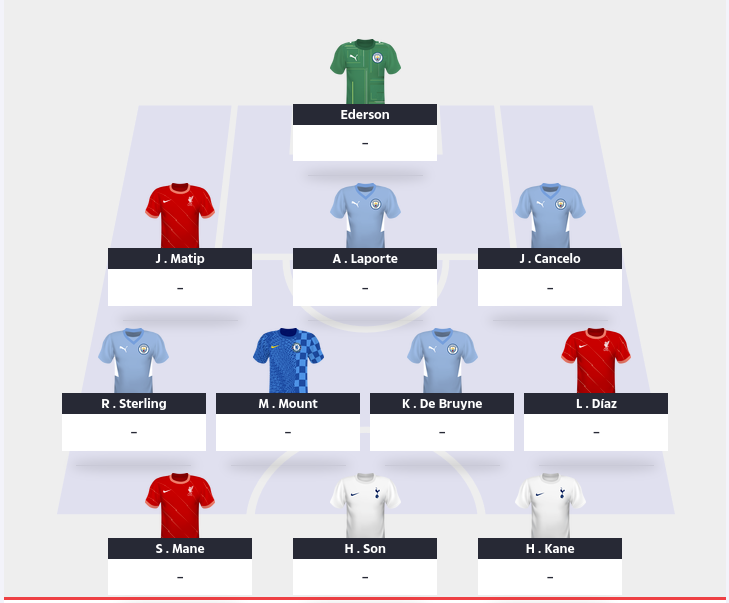 The Man City defensive contingent of Ederson (£4.4m), Aymeric Laporte (£5.4m) and Joao Cancelo (£7.5m) combined for 34 points despite failing to keep a clean sheet at Molineux in midweek.

The Frenchman-turned-Spaniard scored against Newcastle to bank 13 points at the weekend while the Portuguese full-back provided an assist and added two more 7+ ratings to his collection – no player has more this season.

Joel Matip (£6.4m) scored against Aston Villa on Tuesday night and claimed the Star Man award too for a 13-point haul.

The Cameroonian centre-back average 5.4 points-per-game this season, a superior rate to that of Virgil van Dijk (£6.6m) and Andy Robertson (£5.9m).

The Belgian superstar stole the show with a four-goal masterclass against Wolves – those arrowed finishes with his ‘wrong foot’ were truly sublime.

De Bruyne’s brilliance demanded the spotlight but it shouldn’t go unnoticed that Sterling added three goals to his tally this week in the form of a brace against Newcastle and the cherry on top of Wolves’ demise.

The England international has been an ultra reliable Dream Team asset in recent years – he’s scored 17 goals in all competitions in 2021/22 despite spending his fair share of minutes on the bench.

Diaz continued his fine form with a goal against Spurs and an assist against Aston Villa to pocket 18 points.

The Colombian winger is now level with Christian Pulisic (£3.5m) on 87 points in total despite the fact he was only added to the game midway through the campaign.

Liverpool’s No11 is both the top points scorer and the most-popular asset in the game so it’s quite a bold move see out the season without him – although there’s no denying his returns have dwindled slightly in recent weeks.

The telepathic duo of Harry Kane (£7.6m) and Son Heung-min (£6.5m) combined for 39 points having all but killed off Liverpool’s title challenge before decimating Arsenal on Thursday night.

It goes without saying at this stage but the Spurs forwards are unquestionably one of the greatest partnerships in Premier League history.

Finally, Sadio Mane (£5.4m) became a double centurion when he scored the winner against Villa, his Game Week haul of eight points took him to 203 overall.

Whereas Salah’s returns have decreased, the Senegal superstar has grown into the season, registering 54 points in the last four Game Weeks.

A superb effort from Simon whose team looks in pretty good shape for the remaining Game Weeks as well.

Good luck to all gaffers ahead of Game Week 36.

SURVIVAL OF THE RICHEST