There’s never a bad time to score four goals in a game but Kevin De Bruyne (£7.3m) may be slightly annoyed his masterclass against Wolves came two days after the voting for PFA Player of the Year had closed.

Aside from the prestigious individual award, the Professional Footballers’ Association will also announce their Team of the Year imminently.

But which players will make the cut?

Let’s see if we can predict the XI.

Alisson (£4.7m) and Ederson (£4.5m) are level on 20 clean sheets each in the race for the Golden Glove – six clear of their closest rival.

However, this may not be a two-horse race as clean sheets are reflective of a team’s defensive effort as a whole rather than individual goalkeeping brilliance.

For example, 19 keepers have made more saves than Man City’s custodian this season.

In terms of individual performance, Jose Sa (£3.4m) has to be a contender as he’s made 120 saves – only three of his peers have been forced into action more often – and Wolves have the fourth-best defensive record in the league, even after De Bruyne’s brutal treatment.

However, it seems like Alisson will get the nod because of his excellent records in one-on-one situations recently – it feels as if he’s earned his side more points than Ederson has this term.

We’ll stay true to a traditional back four with specialist full-backs.

Trent Alexander-Arnold (£7.6m) and Joao Cancelo (£7.5m) immediately spring to mind due to their influence on their respective sides’ build-up play.

Andy Robertson (£6.1m) certainly has a decent claim having provided ten assists himself in the top flight – not to mention his inexhaustible engine that typifies the Reds’ relentlessness under Jurgen Klopp.

And Reece James (£5.4m) is worthy of strong consideration having averaged a goal or assist every 140.7 minutes for Chelsea – unfortunately he’s missed a significant number of games through injury which hurts his case.

At centre-back it’s hard to look past Joel Matip (£6.1m) and Virgil van Dijk (£6.9m) but if Man City claim the title then the Liverpool pair may be separated.

Antonio Rudiger (£4.8m) and Thiago Silva (£4.4m) looked very strong during the first half of the campaign but Chelsea’s clean sheets have dried up lately – still the Brazilian has been immense at times given his age.

The likes of Ben White (£3.3m), Max Kilman (£3.5m) and Marc Guehi (£3.1m) may be outsiders but generally it’s best to think mainstream when trying to predict Team of the Year – history suggests a big-club bias.

De Bruyne is a shoo-in having scored 15 goals and provided seven assists in 28 league games.

And it’s highly likely he’ll be joined in the hypothetical XI by a team-mate given City’s unwavering control in the middle of the park.

Both Rodri (£3.6m) and Bernardo Silva (£4.3m) have enjoyed excellent campaigns for the champions elect – the former has transformed into a Busquets-esque clone this season, much to Pep Guardiola’s delight.

Midfield is the area in which Liverpool are most likely not to have any representatives although Thiago Alcantara (£2.4m) and Fabinho (£3.3m) are worthy nominees.

Mason Mount (£4.6m) is one of just three players to reach double figures for goals and assists in the Premier League this season – that alone constitutes a compelling case.

Chelsea’s No19 averages a goal involvement every 108 minutes in the top flight.

Moving away from the so-called ‘big six’, Declan Rice (£2.8m) has cemented his status as one of the league’s best defensive midfielders, racking up tackles, interceptions and progressive carries for fun.

The West Ham man is also something of a media darling.

As the league’s top scorer and leading assist-provider, Mohamed Salah (£7.7m) is the first name on this imaginary team sheet.

However, it remains to be see whether he’ll be joined by any of his attack-minded team-mates.

The fact he only arrived on these shores in January probably rules out Luis Diaz (£4.0m) but Sadio Mane (£5.2m) and Diogo Jota (£4.9m) have both enjoyed spells that have put them among the league’s best performers – the latter pair are level on 15 league goals each at this stage.

Alternatively, there’s Cristiano Ronaldo (£7.9m) who has scored 18 league goals for a largely dysfunctional team at the age of 37 – his supreme goalscoring pedigree shouldn’t be taken for granted.

Then there’s Son Heung-min (£6.2m), who has an outside chance of swooping the Golden Boot from Salah’s grasp.

The South Korean superstar has 20 goals to his name, two fewer than the Egyptian, with Arsenal, Burnley and Norwich left to play – stranger things have happened.

His partner in crime Harry Kane (£7.3m) has been magnificent under Antonio Conte but his disinterested start to the campaign counts against him.

Jarrod Bowen (£4.7m) joins Mount and Salah in the exclusive group with double-figure goals and assists but the West Ham man is in direct competition with Liverpool’s prolific No11 – he can count himself unlucky.

Here’s the XI in full… 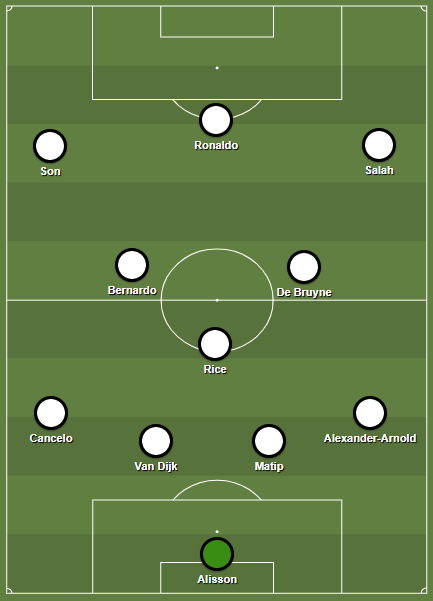 Alexander-Arnold, Cancelo, Van Dijk, De Bruyne and Salah are bankers in our book and so we’re hoping to get at least eight correct when the official announcement comes.