It must be Friday because we’re once again celebrating the best Dream Team of the Game Week.

Trish Wyatt came out on top of what ended up being a high-scoring Game Week 20, she amassed a whopping 166 points when all was said and done on Thursday night. 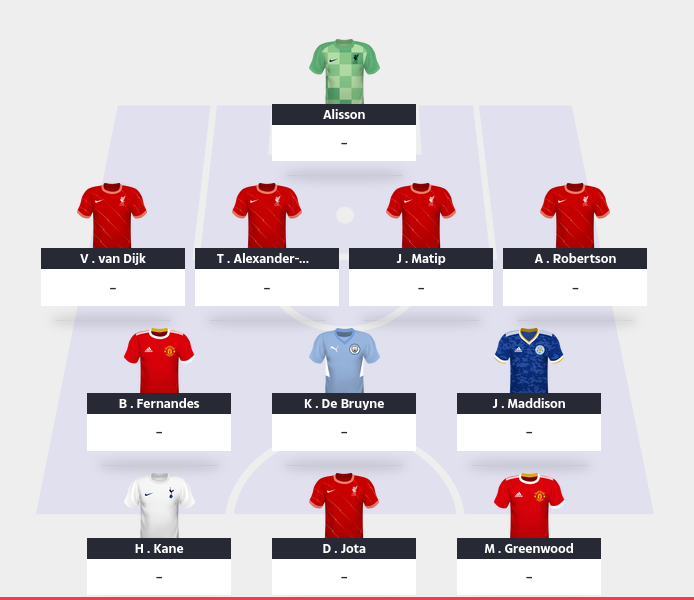 Once again we see potential benefits of the feast-or-famine approach of block-picking a defensive unit from one team.

Liverpool kept a clean sheet at home to Brentford on Sunday and did the same at the Emirates in the second leg of the Carabap Cup semi-final on Thursday.

As the incredibly prolific creator of the Reds’ squad, Trent Alexander-Arnold (£6.5m) was the big winner – his three assists in the space of five days helped him achieve a Game Week haul of 22.

Dream Team’s most-popular defender is the outright best asset in his position having extended his lead over Joao Cancelo (£6.3m) to 14 points – what a battle those two are having this season.

Plenty of Dream Team managers will be looking at Trish’s midfield with envious green eyes.

James Maddison (£3.9m) and Kevin De Bruyne (£6.2m) are two of the most in-form assets in their position right now, as evidenced but their goals against Spurs and Chelsea respectively.

And Bruno Fernandes (£5.3m) bounced back from a fallow period to score twice against Aston Villa before flexing his playmaking muscles with two assists at Brentford.

The Portugal international reminded everyone of his talents with a 24-point Game Week haul – only Leeds’ hat-trick hero Jack Harrison (£2.7m) registered more among all players.

Generally, Trish has stuck to the mainstream, popular selections.

However, Mason Greenwood (£3.6m) is her lone wildcard and one that paid off when the Man United youngster bagged against the Bees in midweek.

The 20-year-old is just the joint-18th best asset among forwards but he did the business in Game Week 20 and that’s what matters for the purposes of this article.

Diogo Jota (£5.1m) actually blanked in three consecutive games between Game Weeks 17 and 19, a spell that featured some frustrating misses, but normal service was resumed when he scored a brace to secure Liverpool a spot in the Carabao Cup final at the Gunners’ expense.

Having plundered 21 points this week, the 25-year-old is now level with his compatriot, Cristiano Ronaldo (£8.2m), on 138 points overall.

The Dutchman may have been the hero at the death but the England marksman was undoubtedly the best player on the pitch – his throughball for the winner was exquisite.

An assist, a goal and the Star Man award meant Kane banked 15 points in Game Week 20 despite the north London derby’s postponement.

Trish, we salute you – good luck to all ahead of Game Week 21!

Which 'big six' players have underwhelmed the most in Dream Team this season?