Apologies for the momentary pause of the weekly ‘Team of the Game Week’ articles during the festive period.

You know how it gets around Christmas.

Normal service is resumed here as we take a closer look at the best-performing XI from Game Week 18.

Wolves fan Colin Goodwin topped the rankings after his team ‘The Pandemics’ racked up 79 points – a very good effort in a generally low-scoring week. 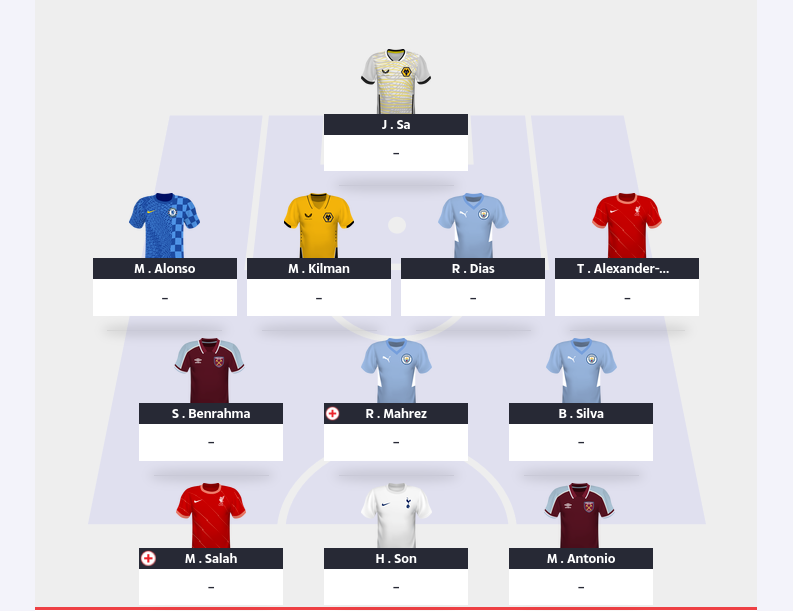 This seems like a classic case of a gaffer making use of their knowledge of the team they support.

Wolves’ excellent defensive record has been overlooked by the majority of managers so far as none of their defensive assets appear in more than 2.2% of teams.

However, Colin has clearly been keeping close track of his own side’s frugal defence – only Man City have conceded fewer league goals at this stage – and he reaped the rewards for backing Man Kilman (£3.7m) and Jose Sa (£3.4m) when the pair registered a clean sheet at Old Trafford on Monday night, pocketing 15 points between them in the process.

Marcos Alonso (£4.1m) looked like something of a weak link against Liverpool but he rallied wonderfully in the Carabao Cup on Wednesday night.

An assist, a clean sheet and a Star Man award meant he took Spurs for 15 points when all was said and done – no defender bagged more points in Game Week 18.

Colin will have to replace two thirds of his midfield this week as both Said Benrahma (£3.6m) and Riyad Mahrez (£6.9m) have joined up with the rest of the Algeria squad ahead of the Africa Cup of Nations but the duo left 13 points as a parting gift for the inconvenience.

Mohamed Salah (£8.2m) also signed off with a goal before departing for AFCON to take his overall tally to 233 points – a simply obscene effort.

Son Heung-min (£5.2m) was the highest-scoring forward of Game Week 18 after notching ten points against Watford by virtue of an 96th-minute assist that sealed the Star Man award.

The South Korean is just one point away from joining the 100 Club™ this season.

Finally, Colin was rewarded for retaining faith in Michail Antonio (£4.0m) when the Jamaica international opened the scoring against Crystal Palace.

After a lean run of four points in eight games, the Hammers’ No9 has returned 18 points in the last two Game Weeks.

Well played, Colin, and good luck in Game Week 19 – that goes for all of you!