Game Week 13 is in the record books and Dream Team gaffers are feeling festive after a bumper dose of midweek Premier League action played in near-freezing conditions.

At the top of the pile for Game Week 13 was Robert Kennedy and his team ‘Crystal Phallis’ (stop giggling at the back).

The Sheffield Wednesday supporter watched on with glee as his XI racked up a massive 176 points!

Let’s take a closer look at how he did it… 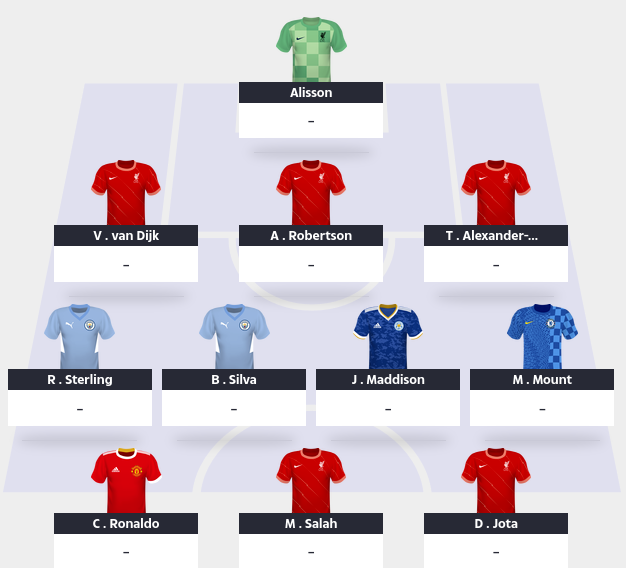 It’s an all Liverpool affair in defence for Robert – the quartet (with Alisson included) combined for 52 points despite the fact they were denied a clean sheet in the Merseyside derby.

And that’s because all three defenders contributed to goals this past week.

It’s bold of Robert to crack on without any Chelsea or Man City defenders but it paid off handsomely in Game Week 13.

James Maddison (£3.0m) has plucked some world-beating form from nowhere all of a sudden.

Leicester’s No10 made it three Star Man awards in a row thanks to two goals and two assists at the expense of Watford and Southampton.

The Foxes playmaker appears in just 3.9% of teams so credit has to go to Robert for his foresight – a stroke of genius.

Bernardo Silva (£3.5m) is about as reliable a midfielder as you can get these – he’s also the best player in the league right now according to Pep Guardiola – and his stunning volley against Aston Villa earned him eight more points.

Mason Mount (£4.2m) bounced back from five consecutive blanks with a 15-point haul against Watford, just his second double-digit haul of the campaign.

Cristiano Ronaldo’s (£8.3m) yellow card at Chelsea was the only thing that stopped Robert achieving perfection up front but the Portuguese superstar will surely be forgiven after his brace against Arsenal on Thursday night.

Emmanuel Dennis (£2.2m) bagged 18 points, one more than the five-time Ballon d’Or in Game Week 13 but Robert can’t complain about having three of the top four forwards of the week.

Diogo Jota (£4.9m) was the MVP of the week having scored three goals and bagged two Star Man awards for grand total of 31 points!

And of course, Mohamed Salah (£8.3m) continued his superhuman quest for ultimate supremacy with another 18 points – the Egyptian King averages over 10 points per fixture in 2021/22!

What was that about Bernardo being the league’s best player, Pep?

Excellent work, Robert, and we wish you all the luck for Game Week 14 and the rest of the season.

Injuries and suspensions update ahead of Game Week 20

Ben White is the unlikely antidote to Arsenal's post-Wenger brittleness

Why is John Stones still more popular than Aymeric Laporte in Dream Team?

WOOD YOU BELIEVE IT